The president appeals for decency.

Nazis and roaches are the left’s last, best hope.

When elections denials start next week, will anyone hold Democrats accountable for undermining democracy?

Appalling examples of government hypocrisy that will make you angry

Agreement is off limits in Washington except for one thing: the acceptance of government hypocrisy. Bills, policies, programs, and agencies conflict with competing and often pointless goals that cost us money and ensure our taxes go to waste. That’s before we get to the lies, misinformation, and outright disinformation that characterize business as usual in our nation’s Capitol.

#1: Both parties agree we are still recovering from one of the worst recessions in decades, our debt is soaring, and we continue to spend billions on people and countries that hate us.

#2: Government spending on the recovery didn’t fix the economy, so Democrats want to spend more.

#3: Obamacare is stalled, but Democrats insist on pushing it forward as written and Republicans want to repeal it without an alternative bill.

#4: Congress throws equality and fairness in our faces at every opportunity while its members anticipate a new Office of Personnel Management rule to give them a pass on participating in Obamacare.

#5: We are about to face a new debt ceiling crisis and the White House will ask for more spending money to fix it.

#6: Our government is supposed to be more transparent than ever (see: The Hoax Behind Our Big, Accountable Government). Transparency shows us just how wasteful and scandal-ridden Washington is.

#7: Homeland Security claims the border is safer than ever, but the focus of bipartisan support for an immigration bill is making the border safe.

#8:  There is bipartisan support for nation-building in the Middle East despite all evidence that Islamic democracy and the Arab spring are Washington pipe dreams.

#9: White House policymakers and the Department of Education are wringing their hands over education costs while they empower unions and argue for raising teacher salaries that make public education costs go up.

#10: Prosperity is a good thing, but Democrats keep promising handouts and government-sponsored financial security that help make Americans lazy and dependent on the government.

#11: America’s credit was downgraded in 2011 not because of the debt, but because our two political parties couldn’t agree on how to spend lots of money and reduce the debt at the same time.

#12: We have bipartisan support for Democrats and Republicans working together. To accomplish that goal both parties indulge in finger-pointing and blame that makes bipartisanship impossible.

#13: Republicans, Democrats, and the White House publicly agreed on the importance of helping the middle class, then raised their taxes in January 2013.

#14: We ascribe characteristics to Muslims in America that we don’t see anywhere else, but we keep calling Islam a great world religion.

#15: Both parties agree that unemployment is a bad thing and the recession makes it difficult to find a job, but every time an extension of unemployment benefits comes up they find excuses to block it (see: Why Do Republicans Want to Be America’s Enemies?).

#16: Democrats and the president blame the wealthy for stealing opportunity from the middle class but most are wealthy in their own right, enjoy excessive perks at taxpayer expense, and helped craft the tax code that they are so eager to blame.

#18: The White House admits the jobs numbers could be better, so we pass policies like DACA to create more competition for jobs.

#19: Congress creates problems with no intention of fixing them because members know there is little PR juice to be had from crises that go away.

#20: Big government hypocrisy, conflict, and gridlock keep Washington running. Just think how little government we would need if politicians focused more on getting the job done and less on keeping themselves in the spotlight.

Keep reading: here is a lot more government hypocrisy to make you even angrier

#21: The ultimate hypocrisy: demanding federal money for a problem you created and refuse to fix.

33 House members sent a letter to President Trump asking that funding be restored to programs including the State Criminal Alien Assistance Program (SCAAP). They claimed that:

They also asked that the president not pull funding from sanctuary cities, which wouldn’t need programs like SCAAP if they didn’t harbor so many illegals.

After years of telling us that millionaires and billionaires are the cause of all America’s woes and slamming Illinois Governor Bruce Rauner because of his wealth, Democrats in ruined, violent Cook County chose uber-wealthy J.B. Pritzker as their man for next year’s gubernatorial election. He’s male, white, and rich, traits despised by contemporary Democratic Party values.

We have an immigration problem. Year after year we spend too many tax dollars trying to control the consequences, but when a large enough group comes to the border demanding entrance we take their requests for asylum seriously instead of simply telling them to go home.

Am I the only one who thinks this sets a bad precedent?

#24: women only support women with the same political beliefs

Sarah Sanders sat at the Correspondent’s Dinner last Saturday night and took it. I give her credit for that. As the smile froze on her face was she thinking about the hypocrisy of a woman stabbing another successful woman in the back and calling her a liar in a very public forum while the Me Too movement preaches unity and support? 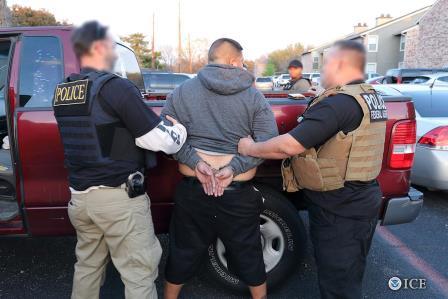 Thanks to a new Democratic House gun control will be in when Democrats take over in January 2019. Illegal immigrant control will be out. Murders committed by illegals let loose because of sanctuary policies and lax enforcement will keep happening while Congress ties itself up in knots over a fool’s errand: how do we keep guns out of the hands of U.S. citizens who have the right to own them?

I’ve never owned a gun. Never had a reason or desire to. That doesn’t mean I can’t spot hypocrisy over gun control.

Last week ICE reported three more murders committed in Missouri by an illegal immigrant released in New Jersey because local authorities refused to honor an ICE detainer. This is a completely avoidable crime. The man was in custody. We let him go. Three more people are dead.

When Democrats take over in January gun control will undoubtedly be a priority. Controlling criminal illegal immigrants will not. We should expect the opposite to be true as the left assures us that illegals don’t commit crimes.

This raises a question: are murders committed by Americans with guns a more serious offense than those committed by illegal immigrants?

Sometimes even Democrats realize when their tax and spend obsessions go too far. That’s what happened in Illinois when the rumored new $1,000 registration charge for green, electric vehicles suddenly dropped by $752.00.

That’s a pretty big concession for this state. If we had time to work the numbers it might even be historic.

Green-obsessed drivers can take some comfort in the nearly 50% jump in the registration fee for gas vehicles and the punishing doubling of the gas tax to $0.38/gallon. Still, if I shelled out for a fancy new electric ride because the end of the world is at hand I’d be mighty pissed off at being punished for trying to save the earth.

Don’t Democrats want us to Go Green? Yes they do, but there are limits and they are all about money. It might have been more palatable to environmentally-savvy drivers to slap an “electric responsibility tax” or something equally nonsensical on charging stations so the state gets its cut of what it’s losing on the gasoline levy. They could also take a cue from Governor Pritzker and slap a mileage tax on everyone, but that would be regressive and punish green drivers and polluters alike.

Of course, regressive also has a different meaning for Democrats in Illinois. That’s another hypocrisy this working-class and tax and fee friendly liberal state seems completely oblivious too. At least the electric vehicle hike only whacks those with incomes high enough to make saving the world affordable.

#27: gerrymandering is wrong but we should use illegals for redistricting

The hypocrisy behind Democratic opposition to the SCOTUS gerrymandering decision is astounding.

Bombastic Tennessee Congressman Steve Cohen set us straight on what it means for our democracy:

The Supreme Court today ruled there was nothing it could do to stop partisan gerrymandering. This practice, politicians picking their voters and drawing lines to reinforce their own power, is anti-democratic and despicable.2

At the same time Democrats vehemently oppose the inclusion of a citizenship question on the 2020 Census because it impacts representation and the flow of federal dollars.

The census is part of our country’s constitutional obligation to count everyone and serves as a guide for critical decisions like the distribution of community resources and the apportionment of congressional districts.3

Rep. Klobuchar is exactly right about what the Census headcount accomplishes and that’s why illegals must be excluded. They can’t vote. The only reason they haven’t been deported is that there are too many and Democrats obstruct every effort to enforce our immigration laws.

Why on earth would we include individuals on the Census who could be back in their home country before the final tally is even counted? Because Democrats in states like California will benefit while taxpayers who foot the tab will lose.

What’s the biggest tragedy Democrats could face in 2020? A Republican resurgence? A no-nukes deal with North Korea? More Hillaryesque revelations about whatever lefty hack they nominate to ruin this country?

Nope. None of the above.

The biggest catastrophe for 2020 will be not having a recession. The media has been pushing. Politicians have been warning. The public is nervous. Another Great Recession is just a hair’s breath away.

Articles on how to recession-proof your portfolio are already popping up. Everyone with an opinion who is not a conservative tells us the bottom is about to fall out. If it doesn’t, the media will get behind the Democratic Party per protocol and create a recession.

Will we be dumb enough to believe it and do all the stupid things that go along with a real downturn to help seal the deal, like selling our portfolios?

Probably, or at least those of us who are also dumb enough to vote for Democrats begging for economic destruction.

Continued on next page