Candidates running for office aren’t known for telling the truth when they make promises. Despite bitter experience we overlook that fact and vote for them anyway. That’s one of the reasons that offering bribes to millions of people that will never be paid is such a popular, legal, and unethical campaign strategy.

The only thing better than a bribe you never have to pay is bribery paid for with someone else’s money. The bad news is that this kind of bribery is up to both houses of Congress, not the president. The good news? It doesn’t matter. All a campaign bribe requires is a stump to make a speech from.

Some new faces with the same old lineup of bribes

There are many different names for bribery. Reparations, Medicare for All, student loan forgiveness, and free college are high on the Democratic Party’s list for the 2020 White House race.

It doesn’t matter who gets the nomination in Milwaukee next summer. Absent a liberal tsunami these promises will end in the same place: nowhere.

We can only do so much with too little.

The Federal Government will borrow $1 trillion in 2019 to help support $21.9 trillion in U.S. debt.1 This should make it highly unethical to condone new, non-essential spending, except when you are making unethical promises for something that likely won’t happen.

A campaign promise is a bribe. It’s not essential for anything but getting elected. When the spending is outrageous beyond what we would consider even without our booming national debt we have to ask ourselves where the dividing line lays between public policy and bribery?

That’s not a difficult question to answer. 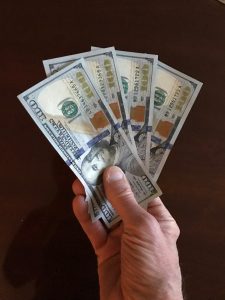 A campaign promise on paper

Which came first, the campaign bribe or the tax increase?

Democrats are offering a disturbing menu of spending vehicles with no regard to the nation’s deteriorating economic future because they have a ready reserve of cash: a huge tax increase on wealth.

The problem is they’ve beat that drum and failed too many times. Even if they win enough congressional seats to pass a hate-the-wealthy revenue bill it’s only good for as long as they hold their majority.

That’s one reason that Democratic campaign bribes are calculated to stoke the flames of division. Candidates will speak of inequity, discrimination, unfairness, and diminishing opportunity. They hope that the faithful are naive enough to support massive new spending because they haven’t figured out that it’s debt and not student loans, health care bills, or the predatory elite that doom their future.

Who are the real predators?

Their candidates for the 2020 presidential campaign offering bribes like these.

Reparations for being American

This isn’t the largest bribe but it’s one of the most outrageous.

The idea of compensating Americans for slavery picked up some traction recently at Georgetown University after students said yes to a reparations fund to atone for their school’s history. The party also frets about debt-plagued college students, so the endorsement of spending by kids with no money to atone for the past seems hypocritical.

The move played into the backstory behind 2020 hopeful Corey Booker’s H.R. 40. Rep. Sheila Jackson Lee (D-TX) called this a “necessary reconciliation with the horror of slavery and its vestiges.”2 Few in Washington will stand up and state the obvious: the Democratic Party has been spending on this necessary reconciliation for many decades. If we believe what we hear, the effort has been largely in vain.

Reparations are an easy, attention-getting bribe that offers Americans the opportunity to assuage their Democratic guilt over something they aren’t responsible for. It’s a safe, calculated bet because arguing against anything to do with slavery is a risky proposition no matter how ridiculous the proposal.

Bribes because we live in America

The fact is that the focus of the Democratic Party’s 2020 campaign will be reparations not just for slavery, but for living in America and not getting what we are entitled to. The big spending proposals are bald-faced bribes disguised as making up for what this country allegedly can but won’t provide for its people.

The wonderful thing about free health care is that it allows Democrats to blast Republicans for their own mistake.

15 Democratic Senators including candidates Sanders, Warren, Booker, and Harris joined 109 Democratic House members to push Medicare for All legislation. Universal health care is a better moniker considering that Medicare spending rose by $10 billion and Medicaid by $5 billion in the first half of FY 2019.3 Why remind taxpayers of how much debt this kind of idea will saddle them with?

This is a campaign bribe and not economic sanity, so perhaps in this context Medicare for All makes sense.

The premise that adding to these rising costs to cover all Americans will make health care affordable is ludicrous, but the party is really good at turning around blame so the issue isn’t cost. It’s about fairness and not having enough revenue because the rich are holding out.

This is just another example of creating a problem and then blaming the opposition for your failure. Consider how Democrats have stymied efforts to fix immigration policy, another crisis they continue to make worse.

Any way you look at it a path to citizenship for illegals is a bribe. Democrats have threatened us with the size of the growing Hispanic voting bloc for years. This is their chance to cash in.

It’s also our chance at another apology for being Americans. Donald Trump gave sanctuary cities that opportunity and a chance to make good on their values by accepting unwanted migrants. The idea was angrily rejected. After years of scoring political points with their now favorite voting bloc, Democrats said no to their own beliefs:

We are deeply troubled by multiple reports, recently confirmed by the President, that the Trump Administration is considering releasing detained immigrants into congressional districts represented by Democrats in a bizarre and unlawful attempt to score political points.4

They won’t say no to amnesty. Last year 2020 front runner Bernie Sanders lamented the failure to pass the Rounds-King pathway to citizenship bill for 1.8 million5 even though it didn’t do enough:

That said, this clearly is not the bill I would have written. What we should be doing is passing a clean DREAM Act with a pathway to citizenship for Dreamers and their parents. We also need to move forward and pass comprehensive immigration reform that will allow people to come out of the shadows and will unite families – not divide them.6

That dream didn’t die and is central to Sanders 2020 immigration campaign agenda, complete with all the damning adjectives Democrats use to describe enforcing the law.

Once illegals are citizens, we can help them go to school.

If Elizabeth Warren offers enough will we dismiss that Native American heritage problem that’s sure to come up during the campaign?

Veracity is still a problem. The senator claims that she “passed bipartisan legislation”7 to rein in predatory student lenders. That’s not how the legislative process works. The truth is she was a cosponsor of the 2017 Student Loan Servicer Performance Accountability Act introduced by Republican Roy Blunt. The bill gasped and died.

Now it’s S. 672, the Debt-Free College Act of 2019. The newest plan calls for federal matching grants to states as part of a partnership to cover all the costs of attending public colleges including books and fees and an allowance for expenses.

What about states like Illinois that don’t have any money to match?

Three Democratic bribes that don’t cost a lot of money

Not everything Democratic candidates will offer costs billions. There are three bribes that are expensive only for what they do to our national self-image.

Impeachment is already doing damage even though no formal process is underway. Democrats will ensure this one hangs over our heads like a dreary storm cloud even though most of them are smart enough to know it’s a risky proposition best talked about ad nauseam and never acted on.

It might be best to dispense with the two-party system altogether. This seems to be the biggest thorn in the side of Democrats repulsed by the notion of deplorable voters, a criminal Republican president, and a nation with no respect for its own values.

There is a third option. We can dump America altogether and offer the people a socialist paradise where nothing has a cost. That idea has great appeal for some, including those duped into embracing a New Deal cloaked in pop culture environmentalism.

These three items are the real bribe Democratic candidates offer for 2020. We have an opportunity to make up for America or better yet, discard it altogether.

How many of us are dumb enough to take it?

Author’s note: edited for clarity after publishing on April 28, 2019.