Home » Illinois » Social Injustice in Illinois is All About the Money

I feel bad for Chicago Police Chief Eddie Johnson. His city stabbed him in the back when it deep-sixed a sensational, alleged, and maybe non-existent hate crime that sent his officers on a costly snipe hunt. Johnson’s anger at the dropped charges was more than justified, but like taxpayers’ unhappiness at the unacknowledged social injustice perpetrated in their state every day it simply doesn’t matter and changes absolutely nothing.

As for Mayor Rahm Emmanuel’s outburst he found out up close and personal how it feels when injustice strikes home.

It makes you angry.

The Smollett case played all the contemporary liberal notes and even threw in a swipe at MAGA conservatives. Then it trampled our notions of social justice. The spotlight went to someone who ultimately reaped the benefits of a system so secretive and opaque that all we are left with is speculation and anger. 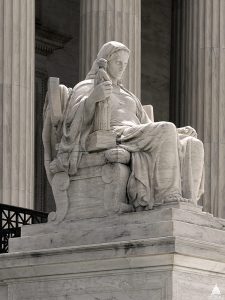 Contemplating justice?
Architect of the Capitol

Democrats in Washington demand extreme transparency as they investigate the minutia of President Trump’s personal, professional, and political lives. Their counterparts in Chicago still can’t explain to anyone’s satisfaction how 16 felony counts equate to $10,000 and 16 hours of community service.

Emmanuel decried a “whitewash of justice,” as if there is something unusual about that.

It certainly smells like injustice, but we can take some comfort knowing that this is a very minor incident in a city and state where massive social injustices are how business is done thanks to a rigged, unfair, and often corrupt political system that devours every dollar it extracts from our pocketbooks to keep itself alive.

Social justice is a Chicago mainstay

Chicago has its bases covered in the social justice department, or at least it likes to give that appearance. Two black women just finished a contentious runoff mayoral race. Gay pride is a mainstay of the city’s social and political scene. Departing Mayor Emmanuel boasts his city’s role as a protective sanctuary for illegal immigrants. Policing is about accountability. Activists demand more of everything for the disadvantaged even though they never seem to go anywhere no matter how much money we spend or which Democrats we put in office.

What city and state officials won’t admit is that the largest social injustices here have nothing to do with any of these things. They aren’t about race or sexual preference. They are about money: who has it and who takes it away.

We welcome illegal immigrants to Chicago’s struggling schools and then we pretend that more students in the classroom have no cost. We tell taxpayers that this is an opportunity to be welcoming and provide an education while funding for their own children is jeopardized by the cost of teacher and school administrator retirements the city and state can’t afford.

The taxpayer payoff of Illinois’ government worker retirement scam is $134 billion in pension debt we will never be rid of thanks to public decision makers who year after year refuse to fix the problem because there are just too many interested parties to appease.

Saddling taxpayers rich and poor with this debt is a social injustice.

Democrats demand a higher minimum wage but they also know that everyone who lives in the city consumes and has no choice but to pay ultra-regressive property, sales, sin, and other taxes that are completely blind to income.

That’s a bitter irony from a party that claims to have the backs of the disadvantaged. Democratic officials are constantly stretching the limits of what they can get away with. Sometimes they go too far, like mayoral loser Toni Preckwinkle’s disastrous 2017 Cook County soda pop levy. The negative publicity for that effort was so powerful that city dwellers probably forgot that a bottled water tax and fountain soft drink tax are already on the city’s list of revenue producers.

An article by the Institute on Taxation and Economic Policy calls out Illinois for its “8th most unfair state and local tax system in the country.”1 The data shows in stark detail who pays the most to live and consume here and provides an easy answer to why Chicago is so determined to be a welcoming city: no matter who you are, everyone has to eat and pay for a place to live and that means revenue.

A listing of property tax rates by state on WalletHub2 reinforced just how bad off we are. The winner? Not quite. We’re No. 2.

While city and state officials hold out their hands for more the Feds can boast 1,731 corruption wins in the Chicago metro and northern Illinois areas from 1976 – 2017.3 Ed Burke’s sensational January 2019 indictment again sent the message to city taxpayers that corruption (or in Burke’s case alleged corruption) is endemic in a political system notoriously unwilling and unable to keep its members on the straight and narrow.

These numbers help keep Chicago at the top of the list of most corrupt U.S. cities.4 Forcing taxpayers to support this unjust system while they struggle to put food on the table and pay their soaring property taxes so they can keep a roof over their heads is the kind of hidden social injustice the city thrives on.

So is a type of discrimination Democrats never acknowledge that is growing in Illinois and across the nation.

There are all kinds of discrimination, but discrimination against wealth seldom makes the list because wealthy Democrats have made hatred of the rich so essential to contemporary liberal politics.

That’s an ideological problem thrown into limbo by the Smollett fiasco’s manipulation of race and sexual preference. Whatever happened will soon be rationalized away by oily political speak. Meanwhile, the straw man built by public officials who condone discrimination against those with money will continue while they sneak in regressive taxation that punishes the poor. That style of social injustice will be completely covered up by Governor Pritzker’s insistence on a get-even progressive income tax.

Advocating levies like soda and other sin taxes, entertainment taxes, expanding i-Pass charges, and even a proposed state plastic bag tax while telling people who fall prey to this kind of taxation that the real problem is wealthy people who don’t pay enough is unjust, discriminatory, and unfair. It takes advantage of public naiveté over just how rotten things are in Chicago and the state of Illinois.

Image: Architect of the Capitol. Retrieved from https://www.aoc.gov/file/contemplation-justice-600w-us-supreme-court-westjpg on April 3, 2019.

Author’s note: updated April 4, 2019 for clarity and content after publishing.