Personality is politics for Democrats who repeatedly fail to gain traction with their oust Trump bandwagon. They are very willing to capitulate to the bad-mannered children who are the new stars of their party. The obsessive negativity towards our nation is so extreme that we have grounds to call it an anti-American personality disorder.

Everyone in America knows what the initials “AOC” mean but how many Americans can say what, if anything, she’s accomplished? Her congressional website is barren. She has introduced one bill that reads like an environmentally-centric satire.

This woman is the face of the Democratic Party. Why?

Whether we’re talking untalented Hollywood stars or loud, abusive politicians, being worthless is no impediment to popularity or fame. Personality is what counts. Democrats know they can’t push any meaningful legislation through the Senate, so like Barack Obama they manipulate the public to create a groundswell of support. Strong personalities are required to do that.

The party not only has strong personalities, the party faithful flock to them like bugs to a porch light. How else could Bernie Sanders’ ridiculous socialist run for the presidency in 2016 have opened the door for an even stronger showing in 2020?

There are many types of personality disorders. They cause the sufferer to behave differently from what most of us consider normal. I couldn’t find an anti-American version to explain what is afflicting prominent Democrats, but it’s pretty obvious this is a big problem sweeping through the party.

How can we tell which Democrats are suffering from an anti-American personality disorder under the delusion that they are responsible American legislators performing their civic duty?

5 signs of an anti-American personality disorder

In no particular order, here are five telltale signs that a politician has this problem.

1. Telling the world America’s president is guilty of treason without any evidence

How can America live up to its reputation as leader of the free world when our president is a treasonous, lying dupe for the Great Russian Bear?

We can’t. That’s the point. 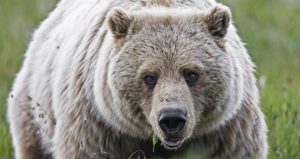 A year ago Democrats were hot on the trail. They had Trump cornered. Conviction and impeachment were on the horizon. Our president’s days in office were numbered. All they needed was evidence.

The evidence never came. The charges were already made:

There is no sugar coating this. It is hard to see President Trump siding with Vladimir Putin over our own intelligence community and our criminal investigators as anything other than treason.1

Where was the treason? Why did we need criminal investigators? It all came to nothing, but it was too late to stop the damage to America’s reputation. In their frenzied efforts to take down Trump Democrats lost sight of the big picture: America’s reputation matters.

Or at least it matters to some of us.

The Mueller report was released yesterday. It makes no difference what it contains. The conclusions are already drawn. Nearly a month ago Senator Patrick Leahy set the stage to ignore these eagerly awaited findings:

We have also learned that the Special Counsel did not provide a conclusion on whether the President’s constant, obsessive interference in this investigation qualifies as obstruction of justice.2

That opens a new rabbit hole Democrats and their equally delusional media scurried down on Thursday. According to The Hill a new subpoena was already issued by famous anti-Trump obsessive Jerrold Nadler this morning.

What does this mean for the nation?

The world sees that American voters are stupid. Our president is dangerous, possibly a lunatic. He’s under Russian control and guilty of treasonous behavior. Removal from office is just around the corner.

It’s all a hoax. There is no credible evidence to back any of it. That doesn’t matter to Democrats whose anti-Trump obsession speaks to pathology, not civic duty.

Their behavior is damaging and anti-American.

Before we dump the Pledge of Allegiance altogether remind your kids that the “United States of America” is an independent, sovereign nation.

That means something, or at least it does to some of us.

There is a crisis and very possibly an all-out emergency at the border. The logistics of dealing with throngs of migrants who just keep coming are a symptom of a much greater problem.

The real issue is whether Democrats will grant Americans the right to live in a sovereign nation.

So far the party says no. Democrats blame their open borders on Republican refusal to pass an amnesty bill disguised as comprehensive immigration reform.

How crazy do you have to be to drive migrants here by the thousands so you can refuse to house them in the cities that claim to be refuges from Trump’s hateful, anti-immigrant policies?

Party members are determined to advance themselves at the nation’s expense. They are using foreign nationals to do it. That’s anti-American behavior.

It also sounds a lot like the treason they accuse Trump of, doesn’t it?

However, according to the National Institute on Retirement Security, the median retirement savings of Americans between the ages of 55 and 64 is currently zero.3

Zero?? That’s scary for some of us. For Democrats it’s an opportunity.

One of their solutions to America’s refusal to save is to crack down on employers and force them to fund retirements:

Under The Saving for the Future Act, men and women who work at a company with ten or more employees would be entitled to an employer savings contribution of at least 50 cents per hour worked into a savings plan, which could include existing plans, such as a 401(k).4

$4.00 per day? That’s the kind of economic brilliance behind the party’s promise to take care of our health care needs and save money at the same time.

Democrats can’t fix their destructive health care plan. Instead, we have unashamed demands for the government to take over health care lock, stock, and barrel.

One thing hasn’t changed – the promise that we can keep our favorite doctor:

They want a health care system which will guarantee them freedom of choice as to which doctor or hospital they can go to.5

That’s Medicare for All. It comes from a party that knows we can’t even afford to fund Medicare or Social Security at current levels for the people who have paid into these entitlements.

Setting up the nation to fail and telling the people it’s what they need and want to finally be secure is anti-American.

So is telling them that college tuition, wages, and jobs are government responsibilities denied by free enterprise capitalism.

So is defining an acceptable standard of living and drawing the line between how much success is a good thing and how much makes you a tax cheat and profiteer.

My father was a World War II veteran. So were many of his friends. More than once I heard them express relief that they wouldn’t be alive to see where this country is headed.

That was years ago. Now we’re at that place these patriots feared so much that ignorance in death was preferable.

Democrats should take a hint. Russia started moving away from socialism a long time ago. China is shifting to capitalism. There’s a
reason for that. It’s so obvious that I’m not going to waste your time spelling it out.

So why don’t Democrats get it? Blame it on anti-American personality disorder. The party is putting its needs ahead of a nation with values that collide with pandering to those afraid of the responsibility to care for themselves.

Nothing does that better than socialism and nothing opposes it more than the American spirit contemporary Democrats are trying to kill once and for all.

What’s left when they are finished?

Does America end with a society ruled by Democratic elite?

There is no getting down and dirty with the proletariat for this Democratic Party. Politico reports that uber-leftist Bernie Sanders campaign war chest tops the big money list. Elizabeth Warren’s stockpile is a close second.

Rolling in piles of donated cash seems hypocritical for a socialist who damns the wealthy despite making far more money than most Americans can ever hope for.

That’s a jarring hypocrisy but it’s not anti-American. The anti-American part comes from damning other people for having what you have and wanting to take it away from them so you can rule over a nation of dependents.

Democrats despise Putin and Russia, but they are determined to turn our economy into a socialist haven for the leftist political elite.

Chalk it up to anti-American personality disorder.

Don’t let these politicians suffer – vote them out

Public service has got to be pretty tough when you don’t like the country you have a sworn obligation to support and defend. It’s easy to imagine how that kind of discord might make you completely crazy.

We have ample evidence that this is a big problem among Democrats. Consider this recent statement in a press release from Elizabeth Warren that seeks to use natural disasters to fan the flames of divisiveness. The senator and Rep. Bennie Thompson (D-MS) sent a letter:

Is this another not very carefully disguised mea culpa from Warren?

Whether the problem is unfairness and inequity or the wealthy, predatory elite, disordered Democrats are masters at inciting division by separating people into groups. Divide and conquer works. It’s also anti-American, but in the depths of their delusional state I doubt the worst of the Democratic Party has the slightest idea what they are doing.

One nation under God? Not for this party.

1. Smith Statement on Trump Summit With President Putin: “It is Hard to See President Trump Siding With Vladimir Putin Over Our Own Intelligence Community and Our Criminal Investigators as Anything Other than Treason.” Adam Smith. July 16, 2018. https://adamsmith.house.gov/2018/7/smith-statement-on-trump-summit-with-president-putin-it-is-hard-to-see, retrieved April 17, 2019.