Now that we have added a death toll from protests to the economic damage it’s time for Americans to ask a question. Why are Democrats so determined to turn a valid issue into the scam of the year? In the hands of the Democratic Party racial injustice is an opportunity that serves the temporary needs of a political campaign and nothing more.

Democrats don’t seem to realize that by condemning America for systemic racism they also admit how little they have done over the years to fix a problem they took possession of long ago. That’s a big problem for the party’s credibility and the aging white has-been tapped to make everything right while the left tries to reeducate the nation about white privilege.

Racial injustice campaign is about politics and power, not people

It’s pretty clear from #WhatMatters2020 what Black Lives Matter is all about: the “2020 U.S. Presidential Election.”1

It’s hard to imagine how a single national contest with a weaker than usual Democratic candidate will fix what party lawmakers blame on centuries of racial injustice:

It is intolerable and unacceptable that many Black men come to believe, often for good reason, that the American Dream is not available to them. Centuries of systemic racism has caused significant economic, educational, and social disparities for Black men and boys throughout American [sic].2

Joe Biden will instill this missing confidence in America?

Democrats won’t pass up an opportunity to drill their story of life in a fundamentally racist society into the heads of Black Americans. They offer salvation that only their party can provide, but it never comes. The same issue is always ready and waiting for the next election. 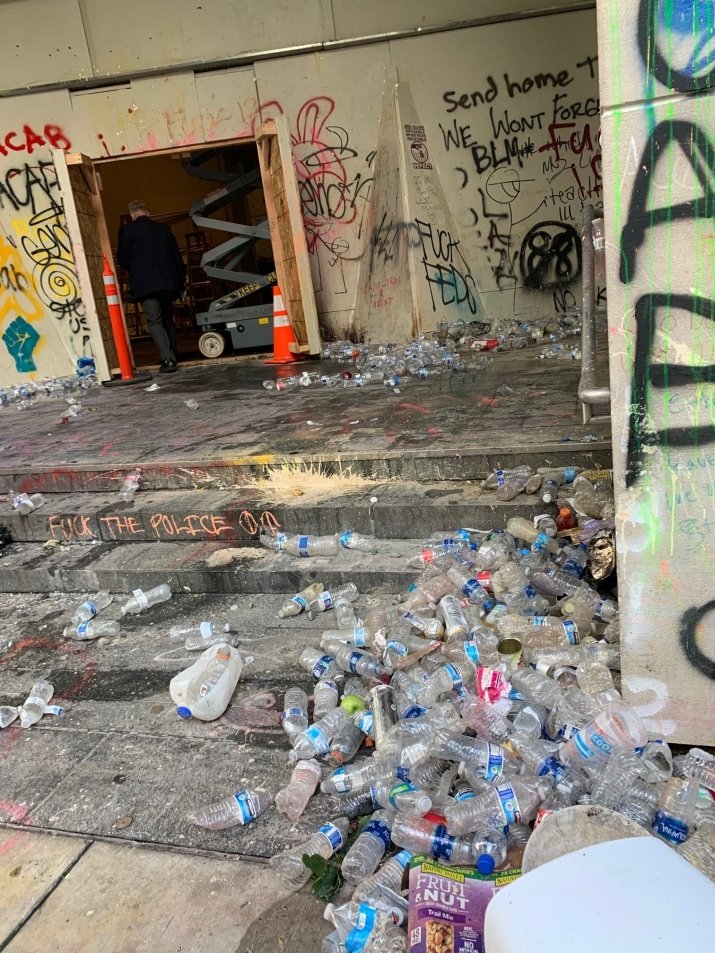 Centuries of systemic racism and Democrats did what?

The phrase “centuries of systemic racism” is very popular this summer. Democrats used it to promote the Justice in Policing Act, an “important step” that never made it into law:

No single policy will undo centuries of systemic racism, but today the House and Senate are taking an important step to increase transparency and accountability in policing.3

Thank you, Chairwoman Eshoo for convening today’s legislative hearing on 22 bills to improve both quality and access to mental health care in America. This hearing is particularly timely as our nation is simultaneously confronting a global health crisis, a severe economic downturn, and centuries of systemic racism.4

We hear about centuries of systemic racism from politicians in cities, states, and on Capitol Hill. Systemic racism underlies climate change inequities,5 health care, education, our justice system, and immigration:

An estimated 11 million undocumented immigrants call America home. 575,000 of them are Black. Black immigrants much like African Americans are disproportionately targeted by the criminal justice system, which often leads to deportation and detention.5

We should not be comparing the rights of illegals to citizens no matter what their skin color is, but Democrats won’t let an opportunity slip past to remind us that America is a racially hateful place. The ease with which they apply the racist label to every aspect of their 2020 campaign platform, including the policies they are solely responsible for, stinks of a scam.

Here’s the elephant in the room: with many years and many majorities behind them, why didn’t Democrats repair these inequities when they had the power to do it instead of just using them for their own gain like Biden and ex-prosecutor Harris are doing now?

What has the party been doing for the past two hundred years?

It is inevitable that COVID-19 would intersect with racial injustice. Democrats depend on their base’s eagerness to believe every word they utter even though they are the ones who designed, wrote, passed, implemented, and managed the health care system that leaves black and brown Americans dead at an unjustly higher rate.

In 2010, Congress recognized racial disparities as an urgent health crisis and as part of the ACA, elevated the HHS Office of Minority Health to “lead and coordinate activities that improve the health of racial and ethnic minority populations and reduce health disparities.6

That bit of self-congratulations was from radical left progressives Ayanna Pressley (D-MA) and Elizabeth Warren (D-MA). The pair tried to find an exit from a problem Democrats refuse to take responsibility for. Instead of addressing the problem, they pin their charge that “the system is killing us”7 on the Trump administration, knowing full well that Democratic voters will believe what they tell them even if it comes from a politician as divisive as Maxine Waters (D-CA):

While Trump, Adams, and others are busying pointing the finger and spewing lies, thousands of people in this country – particularly African Americans — are dying.8

Water neglects to mention how little Democrats have done with their majorities to make sure this ends. It’s the same approach they took with the Affordable Care Act. The Obama administration acknowledged the racial injustices in American health care in its fact sheet “Affordable Care Act and African Americans:”

Racial and ethnic disparities in health and health care in the United States are pervasive and well-documented. Racial and ethnic minorities still lag behind their non-Latino White counterparts across a range of health indicators, including life expectancy, prevalence of chronic diseases, and access to quality care.1,2 9

What happened? Democrats failed Black Americans. They failed the Latino community, too. Years later we still have the racial health care problems they made an issue of nearly a decade ago. Their only explanation for their failure is systemic racism that is somehow Trump’s fault after less than four years in office.

If our society was politically responsible no one would be blamed for COVID-19 deaths except China. Using dead Americans as a political tool to inflame racial tensions is shameful and amoral. If we are going to blame minority COVID-19 deaths on someone it should be the politicians who engineered their own minority health care system with the ACA. Otherwise we are falling for a partisan scam.

Health care is just one sign that racial injustice is a scam campaign issue. Here are a few more.

Politics of racial injustice is what matters most

House Democrats are committed to addressing systemic racism, ensuring justice and accountability, and ending the loss of African American lives due to violence.10

It’s obvious Hoyer wasn’t talking about the violence within minority communities that steals more lives in a single weekend in Chicago than what the media eagerly reports nationwide at the hands of law enforcement.

What’s even more obvious when Hoyer invokes the Declaration of Independence is that he’s not paying attention to the radical elements of his party that deplore our founders and eagerly tear down monuments to their memory:

House Democrats will keep fighting to ensure that the words of our Declaration of Independence – that all are “created equal, that they are endowed by their Creator with certain unalienable Rights, that among these are Life, Liberty and the pursuit of Happiness” – hold true for all in our country, regardless of race. We will continue to use our House Majority to ensure that black lives matter.11

Wagging forked tongues on Capitol Hill to stir up the masses is de rigeur pre-election politics. This year it means angering liberals over racism and frightening conservatives over the safety and security of their lives and businesses. At least the latter approach has some validity.

The first only leads to costly and unfortunate consequences that have everything to do with electing Biden and absolutely nothing to do with addressing racial inequities.

Pre-election politics is always a partisan scam, but fanning the flames of racial injustice is a dangerous stunt. Democrats already have a Charlottesville on their hands in Portland that they’re desperately trying to pin on the president. Apparently that’s not enough.

Biden’s nonsensical speech from Pittsburgh on Monday condemned violence, blamed Trump for violence from the right and left, and then mimicked the president’s call for law and order. He covered every base his speechwriters could think of. Are voters dumb enough to swallow this scam, or are they smart enough to pay attention and reject those who Democratic puppet Biden really represents?

Where race is concerned, due process is a relic

No responsible American will argue that the police should not be held accountable when they break the law.

The dispute lies in what breaking the law means and who is accountable to whom.

Accountability from a court is not the same thing as a rush to judgment designed to sway public opinion and intimidate those in charge of delivering due process. Accountability does not mean a congressional license to make irresponsible, inflammatory statements before the facts of an incident are known.

These remarks came from Congresswoman Barbara Lee (D-CA) after the Jacob Blake shooting:

Even as our entire country struggles to reckon with centuries of police violence against Black people, it happens again. Even as officers, like the ones who murdered George Floyd, are finally facing consequences for their actions, it happens again. When will it stop?12

No matter what a video clip seems to show or what a rush to judgment demands, no one is a murderer until a court rules on the facts.

Ironically, when a politician is charged with corruption they very publicly insist on the same shield of due process denied to police officers so they can prove their innocence in a court of law. Alleged police offenders are immediately tried and convicted by politicians, the media, and brain dead protesters in the court of public opinion at the slightest hint of racial prejudice.

Judicial process aside, any time is a good time to stir up more turmoil. This statement from Congresswoman Gwen Moore (D-WI) came one day after the Kenosha incident:

What happened yesterday to Jacob Blake is an all too frequent experience for Black people in America.13

That’s not true, of course. Few Americans black, brown, or otherwise are shot multiple times, if any by the police. Like the futility of seeking the American Dream this dialogue will play well to a base that knows what they want and don’t want to hear the truth.

Democrats are betting their base won’t believe the truth about radical insurgent “protesters,” either:

Even more infuriating, videos circulating on social media show police coddling armed militia members on the street, offering them water and thanking them, while peppering protestors with rubber bullets and tear gas.14

The message? Not only are police brutal murderers who target Black Americans, they also attack innocent protesters and consort with dangerous, right wing armed militia.

Have they mentioned white supremacists yet?

Will Democratic voters take a moment to think about how little sense this makes when we’ve all seen the radical left destroying public property and businesses, are they naive enough to believe it or worse, will they justify looting and destruction along partisan lines?

Too many black lives don’t matter

Where does this leave us?

This is the messaging on racial injustice from the 2020 Democratic Campaign:

The police are killers who are not held accountable.

Trump is responsible for violence and death at protests.

Scores of Americans murdered every day by their own communities matter less than a handful of police killings that may or may not be legally justified.

Due process is less important to our system of justice than the rule of left wing politicians and the media.

Now does the Democratic Party take on racial injustice sound like a scam? That’s because it is.