How could any American send a Tweet implying that they wish our president was dead? That’s how far we have descended into liberal political amorality. #wrongTrump and a man beaten in the streets of Portland define the place where Democrats brought us as their convention got underway. Hating America is central to their vision. The politicians in the spotlight are just a little less obvious about how they go about it than the instigators behind them.

Hate is a powerful unifier. That’s why it’s the unspoken vision of the Biden and Harris ticket. We didn’t hear the hate in the canned convention speeches about unity or in the words offering phony praise for a great nation that prominent Democrats want to tear apart, but it’s there. It’s not going away.

If you want a single image to understand the Biden campaign that kick in the head in Portland sums it all up. This is what’s in store for us. The difference is that the violence will be done with taxes, social policies, oppressive regulation, and an all-out effort to reshape American thought instead of a more merciful knockout blow.

Hate is the very worst of us. Democrats know very well how to manipulate it to their advantage. 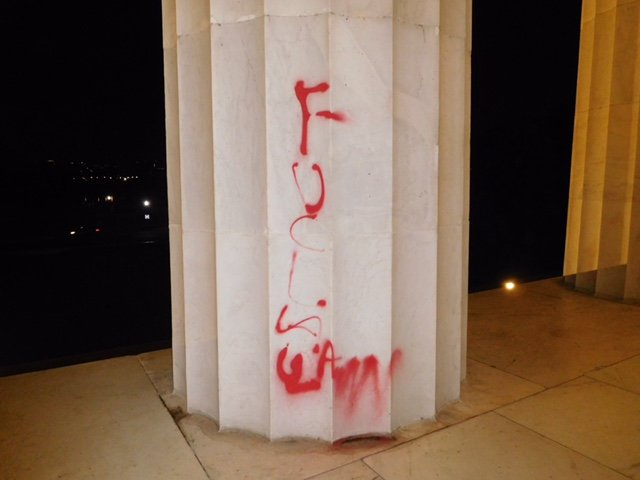 Hating America is easy if you know what you’re doing

Michelle Obama’s patronizing “It’s a hard time” intro to her Martha’s Vineyard screed about the sins of Donald Trump reflects the amazing lack of self-awareness that infects her party. Yes, it’s a hard time for some. It’s probably not a hard time for an ex-First Lady holed up in a sprawling estate who is so disconnected from reality and what “we” are experiencing that she feels justified in calling out our leaders’ “wealthy peers.”

What’s so amazing about this bit of hypocrisy is that so many people who are many millions of dollars removed from American royalty like the Obamas will take to heart every divisive word uttered at this convention while they condemn Donald Trump for his money.

To give Ms. Obama credit where it is due, her words serve a higher purpose. They legitimize a party that has indoctrinated many of the Obama’s adoring fans into the finer aspects of hating America as a necessary prerequisite for change.

Forget every word you heard in the litany of presentations that feigned love and respect for America where none exists. If you weren’t paying attention you might have missed the real call to action. The most genuine, heartfelt speech was only 90 seconds long.

With her wings clipped to the narrowest slot imaginable, Alexandria Ocasio-Cortez (D-NY) summarized all the reasons why we should hate America. We are a racist, misogynistic, homophobic, violent, xenophobic, anti-immigrant, brutal, unjust nation.

The only thing she left out was the violence and brutality at the hands of the socialist fringe she claims as her own.

This freshman upstart deserves accolades for honesty. She seems to believe what she says instead of just using these divisive labels for effect. More important, she recognizes that Biden isn’t what a growing number of liberal voters are after and she displayed the courage to not endorse him. Her words were reprehensible, but they are a lot more genuine than anything else we heard from the other liberal stooges on the guest list.

Stormtroopers are only a threat to liberals

The party was fortunate that their violent, disruptive far left base was not able to intrude on the festivities. We can only imagine the jarring discord of shouting, screaming, peaceful activists being led away off camera.

That’s not the image Democrats want to project. They much prefer vague comparisons to Nazi Germany because the White House tried to quell the violent uprisings they insist are just peaceful protests.

Democrats repeatedly use “stormtroopers” as a slur against federal employees. The party has gone to bat for government workers in the past, but as hate overwhelms their senses all bets are off.

stormtroopers going on to the streets of the United States …1

While agitators brutalized and looted, Democrats stuck their heads in the sand and continued to compare America to Nazi Germany without having the courage to just say it:

AG Barr and President Trump are abusing their power to brutalize communities that didn’t ask for federal intervention. It is my desire to see a final minibus bill that makes it clear that Congress won’t allow Trump to send untrained, unwelcome stormtroopers to American cities,” said Congressman Ted Lieu.2

For the politically dense who miss what Democrats are implying about the “President’s stormtroopers”3 there is this to drive the message home:

Whether in Richmond or Portland, Americans will not live in fear of President Trump’s gestapo.4

While Americans got a taste from Portland, Chicago, and other cities of what happens when political priorities are more important than protecting lives and property,

Speaker Nancy Pelosi called our law enforcement officers storm troopers, the Gestapo and thugs. Former Vice President Joe Biden criticized the federal officers in Portland for “brutally attacking peaceful protestors,” even though the riots are anything but peaceful.

They are making our law enforcement officers out to be the enemy.5

Granted, creating enemies is an important political strategy but what happened to the moral barrier that tells decent people that partisan game playing with references to Nazi Germany is an unforgivable affront to the millions who died and would have given anything to have been living safely in this country?

That barrier is long gone. Partisan hatred broke it down.

Pelosi tried to defend her use of “Stormtroopers” in another media interview.6

She didn’t have to explain. We know what she meant.

Hating America only works in one direction: left

A death in Charlottesville, N.C. gave the Democratic Party years of ammunition to help manipulate their base’s hatred for America.

This year George Floyd’s death dropped in the party’s lap. Democrats characteristically take no responsibility for the violence people and their businesses suffer at the hands of those the party inspired after the Floyd incident. Hateful partisan vitriol that characterizes law enforcement as Nazi Gestapo, the police as brutal thugs, and the president as a racist can only lead to one place. Like everything else that contradicts the party’s false image of what it stands for, all we hear is silence. Culpability is off the table.

Prominent Trump-hating Democrat Jerry Nadler referred to the meltdown in Portland as “particularly troubling” and declared:

These alarming actions beg a number of serious questions.7

Nadler wasn’t talking about the peaceful protesting rioters. He was talking about federal law enforcement officials before the assault that made national headlines:

This is simply unacceptable, and it must stop.8

Democrats have no right to use our National Anthem

Children opened the Democratic National Convention with America’s National Anthem against a backdrop of hateful, anti-American messages that boosted Biden and Harris all the way to the 2020 presidential race.

Democrats have absolutely no right to talk about America the beautiful, our great nation, bringing Americans together, the soul of our nation, or any of the other vacuous allusions that might bring in votes from unsuspecting Americans who can’t or won’t connect the dots.

When I heard Kamala Harris say “God bless the United States of America,” I cringed.

At least Biden had the decency not to say it. There is nothing united about us and no god I am familiar with who would bless the outpouring of hate this amoral party supports.

UPATE August 27, 2020: Blake rush to judgment makes it easy for voters to hate America even more

It’s frightening to think we could elect a candidate who judges first and gathers the facts later, but that’s how Joe Biden responded to the Jacob Blake shooting. He called the shooting “excessive force”9 and demanded the officers involved be held accountable before tossing out two favorite hot buttons to rile up his base: systemic racism and equal justice.

When Biden says “We must fight” to honor American ideals,10 what does he mean? There were no words proffered to quell the violence, no suggestion that we wait for the facts, and not a single mention of a system of justice that, by a large, works for most Americans who are innocent until proven guilty.

This is how you conduct a campaign based on hating America. It’s how Democrats have attacked Trump from day one: convict first and worry about the facts later, or preferably not at all.

God help us if this liberal socialist puppet ever gets close to the White House.