Crazy Nancy Pelosi is at it again. Under the guise of saving America she attacked President Trump again with a new Protecting Our Democracy Act.

We’ve already burned through two Democratic Party Protecting Our Democracy bills. Both targeted Donald Trump. The first was introduced in 2016. It was revisited in 2017 to clear the way for a National Commission on Foreign Interference in the 2016 Election.

We all know where that led and how much congressional effort was wasted trying to leverage Russian interference to oust the president. With very little time left before the people take the decision out of her party’s hands, a failed Crazy Nancy attacked again with a new effort to hamstring the White House that won’t go anywhere.

Democrats finally have a legitimate avenue for removing the president: a national election. Instead of playing fair and abiding by the Constitutional and democratic norms they falsely claim to support, party bigwigs are throwing out disinformation that the president refuses to leave the White House regardless of the outcome of a free and fair contest.

That conclusion was drawn entirely out of context. Anyone who listened to what Trump actually said knows this, but Democrats are notorious for assuming the American people are witless and ignorant and only understand dumbed-down propaganda from liberal political hacks. They are also known for ignoring their own hypocrisy, including Hillary Clinton’s advice that Biden not thrown in the towel under any circumstances. 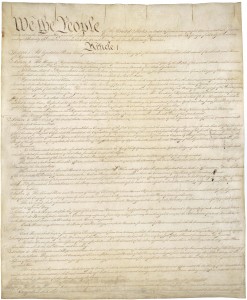 Our chairs have crafted a robust reforms package that can stand up and prevent an assault on our democracy, including abuse of the pardon power – the distinguished Mr. Schiff talked about, the soliciting of foreign interference in U.S. elections, the retaliatory attacks on whistleblowers, politicization of rules – the tools of justice, abuse of office for personal, for personal enrichment and contempt of Congress’s oversight powers on behalf of the American people, including our lawful subpoena power.1

Crazy Nancy sounds near hysterical when she gets down to specifics:

Enablers, that’s what those who support the President’s actions are: enablers of undermining the Constitution of the United States.2

She never mentions Trump by name, but it’s safe to say this isn’t to stop Joe Biden from abusing his powers if he wins next month. It wouldn’t matter if it did, because Democrats display an amazing ability to ignore reality and the truth and to sidestep their own legislative safeguards.

Pelosi’s phony concern with protecting our democracy and Constitution is just another symptom of her contempt for the American people. We saw that contempt in her maskless trip to a beauty salon. We hear it in every false claim that plays to her assumption that we are all ignorant serfs waiting for her party’s next handout.

For a change the new handout isn’t monetary. It’s saving America herself so Democrats can rule without interference in perpetuity.

No shame in protecting our democracy

One thing Democrats deserve credit for is their absolute inability to feel shame. Do they have some sort of procedure done when they take office so this emotion that tells us when enough is enough vanishes forever?

The Protecting Our Democracy Act was championed by the same politicians who failed completely and utterly after they wasted taxpayers’ time and money trying to impeach the president. Adam Schiff, Jerry Nadler, lame duck Eliot Engel, and other Trump haters spewed their nonsense in support of this bill:

Our democracy is not self-effectuating – it takes work and a commitment to guard it against those who would undermine it, whether foreign or domestic.3

That’s a pretty bold statement from a party whose extremist base is setting fires, burning American flags, shooting and killing police officers, threatening people in their homes, and looting businesses. It’s easy for Democrats to dismiss this anti-Americanism as peaceful protests, but we know what we see. The silent objections of Democratic Party politicians are deafening.

More important, our democracy is self-effectuating. All we need to do is follow the Constitution. Crazy Nancy seems confused about this. Sometimes the Constitution is paramount, sometimes she pretends it doesn’t exist.

I’m really, really tired of hearing “RBG.” Democrats obviously hope to make this acronym stick just like “protecting our democracy” and the other tired phrases they repeat endlessly to their unwashed, uninformed masses.

Crazy Nancy is also fond of the word “Constitution” when it suits her needs. She used it eleven times in her press release for the new anti-Trump reform bill.

For some reason the Constitution’s provisions for replacing a vacancy on the court don’t apply to this president. Instead, Pelosi swapped the Democratic Party’s rules for protecting American democracy.

Pelosi’s new obsession with Old Glory and our Constitution took second place to spreading fear that Trump nominee Amy Coney Barrett will put the final nail in the Affordable Care Act’s coffin. She doesn’t say it, but Roe v. Wade is also hiding in a long list of party priorities she fears are under fire after Ginsburg’s passing:

Everything hangs in the balance with this nomination: a woman’s constitutional right to make her own medical decisions about her own body, the right of LGBTQ Americans to marry who they love, the right of workers to organize and collectively bargain for fair wages, the future of our planet and environmental protections, voting rights and the right of every American to have a voice in our democracy.4

The speaker may be crazy but she is far from stupid. Pelosi knows better than to go overboard venting her vitriol against Barrett. She will leave that up to the same Senate thugs who viciously attacked Justice Kavanaugh. Meanwhile, she can always blame Trump:

Trump is exploiting this vacancy against the clear and overwhelming will of the American people, as he dismantles the pillars of health and economic security in America.5

“Clear and overwhelming will” must leave Trump voters out of the equation. I can assure Speaker Pelosi that many, many conservative voters were thrilled witless after they listened to Trump’s announcement on Saturday afternoon.

As fixated as she is on protecting our democracy, Pelosi never once mentioned the Constitution in her anti-Barrett, anti-Trump press release. Instead of the Constitution which she knows gives the president the power to do exactly what he is doing, it’s now about the will of an American people she seems to think are all Democrats.

That’s crazy, but we’re used to craziness from Pelosi. Her hatred and desperation are now so out of control that she seems incapable of any self-awareness and apparently has no one in her camp able to tell her that enough is enough and it’s time to let democracy take its course on November 3.

In the days to come we can expect to see our speaker become completely unhinged as the Senate nomination process grinds to an inevitable conclusion, as Biden embarrasses himself further on the campaign trail, and as her hope for a Democratic Party hegemony that will protect our democracy for Democrats swirls down the drain again.

UPDATE September 28, 2020: Democrats can prevent foreign interference. Why didn’t they?

House Democrats make the bold claim that their Protecting Our Democracy Act will “protect our elections.” Despite failing to convict the president for soliciting foreign assistance, the fact sheet for their bill asserts that:

Trump has sought foreign interference to help his election. Repeatedly. Trump has abused the powers of his office to benefit himself, at great cost to the American people and our democracy.6

Whether or not this is true, they also claim that their bill will “Prevent Foreign Interference in Elections.”7
Among other things, this legislation:

requires that each political candidate and immediate family member of a candidate notify a designated campaign committee official of certain foreign contacts;8

House Democrats ignore the escalating Hunter Biden scandal just like they ignore their base’s continuing urban insurrection, but their new anti-Trump effort begs a larger question: if they have the ability to prevent foreign interference in our elections why didn’t they do it in 2016, long before Trump set foot in the Oval Office?

Here’s an idea. This bill doesn’t have anything to do with protecting American democracy. It’s all about putting a set of prohibitions in place that Democrats can use for another impeachment charade after a Trump victory, assuming Crazy Nancy doesn’t try to do a new quick and dirty impeachment before the year runs out and she risks not having the chance to impeach Trump forever one more time.

6“The Protecting Our Democracy Act.” p. 1. Retrieved from https://intelligence.house.gov/uploadedfiles/fact_sheet.pdf on September 28, 2020.