House Speaker pays phony tribute to “One Country, One Destiny”

There aren’t many Democrats left who should not be ashamed to honor the Fourth of July. They made 2020 all about tearing this nation into liberal-sized pieces ripe for exploiting.

No one knows how to do this better than Nancy Pelosi. She paid tribute to Independence Day with a few phony remarks about the American flag to kick off her pre-holiday press conference:

Had she been honest, she would have admitted she means “one country, one destiny for Democrats.” 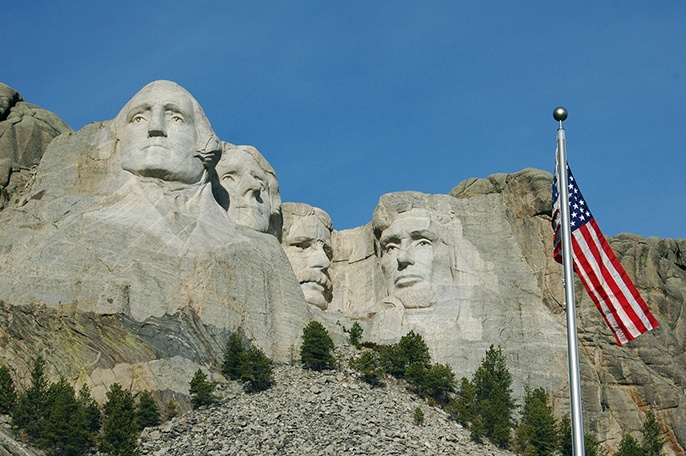 Pelosi’s comments quickly became offensive as she proceeded to attack the Trump administration and Mitch McConnell’s Senate leadership. She could have suggested that for just one short day we put our differences aside and celebrate what we all have in common, but the speaker is savvy enough to know that when you are driving the nation apart you have to be on the ball 24/7.

It took a war to make this country and now a new war is threatening to destroy us. Many of the iconic American figures responsible for our independence are in danger of disappearing as Democrats strive to sanitize our heritage with their newly woke revisionist history. Even Mount Rushmore and an Abraham Lincoln monument at the University of Wisconsin in Madison are under fire as the left’s definition of unacceptable widens to include everything that happened before the killing of George Floyd.

Pelosi’s liberty and justice is an anarchist call to action

Pelosi had the audacity to trot out “liberty and justice for all” as if it is a shared American value instead of a partisan call to action. The reference was about the bills Democrats can’t get through Congress and their hypocritical support for an Affordable Care Act many in the party are more than ready to swap for a single payer socialist health plan:

Passage of these stalled bills and punishment from the anarchic neo-left is just one election away. Justice for all will be a very bad thing when Democrats get the power to settle accounts and attack those who don’t kneel to their increasingly extreme values.

Last July Minnesota insurgent Rep. Ilhan Omar introduced H.Res.496. Among other acts of protest the resolution affirmed that flag burning is constitutionally-protected free speech. Pelosi had the political sense to not sign on to that one, but eighteen of her fellow party members endorsed Omar’s resolution.

We have come a long way since last year’s Independence Day. Hatred for America, our history, and institutions is at a fever pitch. The left is burning a lot more than American flags and they are getting away with it.

Democrats have worked hard. They are very good at what they do. There is a lot at stake for the party this year and by all appearance they are winning.

This makes Nancy Pelosi’s American flag remarks even more phony and offensive to anyone who cares the least bit about this country. Her party’s endorsement of anti-Americanism is a shrewd calculation that hating our country will bring in enough votes to put Democrats forever in charge of our destiny.

I didn’t see a picture to accompany the speaker’s press conference. For now we’ll assume that the flag pin she is so enamored with was pinned right side up.

UPDATE August 8, 2020: Pelosi wrong again with her one country, one destiny flag remarks

It’s best to stop when you think you’re ahead, but weeks after her July 2, 2020 American flag remarks Pelosi was still talking about her flag pin. This time the occasion was John Lewis’ funeral:

It might be what John Lewis was about, but it’s not what Nancy Pelosi is about by any stretch of the most distorted imagination.

The speaker mentioned Abraham Lincoln three times and the Lincoln Memorial twice during her remarks.5 Perhaps she is unaware that the left vandalized Lincoln statues nationwide and that Rep. Eleanor Holmes Norton (D-DC) and three House colleagues introduced a bill calling for the Emancipation Statue in Lincoln Park to be removed? H.R. 7466, the Emancipation Statue Removal Act, was introduced July 1, 2020, the day before Pelosi’s pre-Independence Day American Flag remarks:

Congresswoman Eleanor Holmes Norton (D-DC) announced today that she will introduce legislation to remove the Emancipation Statue from Lincoln Park in the District of Columbia, a federal park, citing its problematic depiction of the fight to achieve emancipation.6

If there is anything we are not, it’s one country with one destiny. We are a hopelessly divided nation with two political ideologies pushing us farther and farther apart.

Did Pelosi also forget that she contributes to this by manipulating the term “systemic racism” to remind us how divided we should be?

Since passage of the [George Floyd Justice in Policing Act] bill, our nation has witnessed Americans continue to speak out and demand action to address the crisis of police brutality and systemic racism while the Trump Administration has taken unprecedented steps to deploy anonymous federal law enforcement agents and silence peaceful protesters with violence.7

Her remarks are not only untrue, they are some of the most flagrantly divisive we have heard from the speaker in years. Thank Pelosi and her party for making one country, one destiny another Democratic lie that we can only hope will go away on November 4, 2020.

We should give Pelosi a pass on her beauty salon gaffe. It shouldn’t be a surprise to anyone that Democratic Party royalty holds itself above the common man and woman. Do you think the party elites will hold themselves to the same socialist ideals they want to inflict on the country?

A much better criticism should be leveled at the speaker’s insistence that we always have to remember we are one country:8

I have my Speaker’s pin on today, but many times, I have on the flag pin which said ‘One country, one destiny.’ We have to think in those terms, and we look forward to doing that after the – well, as we go forward. We still have a day here, as we go forward.9

This bit of typical Pelosiesque hypocrisy came from a December 19, 2019 press conference. It was obvious what “after the” referred to. When she finished babbling about her pin and being one nation, the first question from the press was about Trump’s impeachment.

There aren’t too many things in the world of American politics more divisive than trying to remove a president, though we might add abusing the American flag to the list.

Does she think that if she keeps bringing up her flag pin we’ll think that she respects what it symbolizes? This time the occasion was a lunch with members of Israel’s Knesset where she talked about our strong ties with Israel. Those ties, of course, are jeopardized by the anti-Semitic elements in Pelosi’s party.

In August we were treated to video from Portland of left wing protesters burning an American flag. Just like the simple fact that skin color should not be the decisive element of whether your life matters, the American flag should not be a hated symbol for anyone who benefits from living in our country.

For Pelosi our flag is just a hypocritical prop. From impeaching Trump, to blaming the White House for Americans who died from the coronavirus, to failing to rein in the dangerously radical elements in her House, to lukewarm if any condemnation of violent protests, she doesn’t have the right to decorate herself with the American flag. It should only be worn by Americans who believe in what it stands for. Encouraging divisiveness, disunity, and hate doesn’t put you on the list.

By now anyone who reads the news knows that being one country is repugnant to Pelosi, Schumer, and the rest of their Capitol Hill cadre. Too many people oppose socialism and the now constant insurrection that are emblematic of contemporary Democratic Party values. Instead, tearing the people apart with inflammatory words and holding Americans hostage with the unspoken threat of violence if the institutions in Democrat-run big cities step out of line define their angry, hateful effort to retake the White House.

These politicians are not stupid. Instead of bringing Americans together, their goal is to drive a far left bulldozer over everyone who disagrees.

What Pelosi won’t admit is that if she and Chuck get what they want their time on the Hill is limited. They will be replaced at the next opportunity by far left operatives who better represent a party base they helped to create.

UPDATE November 6, 2020: one party with no destiny and no American flag

There is nothing like an election failure to change a political party’s beliefs. We’re already hearing howls from congressional Democrats fighting over what hit them, though anyone worthy of being called an American could have told them many months ago what the problem is: America sells. Socialism does not. Neither does anti-Americanism.

Despite her divisive gibberish and stonewalling of aid to Americans hurting from the pandemic we can give Pelosi credit for not being a socialist and for at least giving the appearance of holding off the dangerously extreme elements in her party. We can’t give the speaker credit for her vindictive war against Republicans and the White House that culminated in no blue wave, no coronavirus relief, and no unity while she fingered her flag pin and preached about one country, one destiny.

On Wednesday Pelosi made another attempt at being one country, though this one only applied to her fellow politicians. In a “Dear Colleague” statement she fell back on “our American Democracy”12 despite the fact that many in her party staked their claim to power on destroying every vestige of what we recognize as uniquely American.

Ours will be a government that fights for the people’s interest, not the special interests – championing progress for seniors, veterans, immigrants, LGBTQ Americans, women, young people and frontline communities.14

There may be a time when we can return to one country, one destiny. Maybe we’ll even have a speaker who wears a flag pin and understands that the American flag is more than a prop to sell partisan talking points. In the meantime Democrats should take a lesson from Tuesday’s rout. Americans want to be one country with one destiny, but they don’t want that destiny to be dictated by their party’s socialist elite wannabes. Pelosi isn’t one of these, but she’s not the speaker we need to bring this nation together, either.