Home » Race in America » No Apologies Will Save Racially Insensitive Politicians

Had Virginia Governor Ralph Northam committed a crime he might be in less hot water than he is now over a decades-old picture. Politicians can salvage their careers after a criminal conviction, but no apologies will save them from a search and destroy political climate where the slightest allegation of racism spells the end.

A criminal conviction, on the other hand, isn’t a ban on public office. The careers of Marion Barry and former Chicago Mayor Harold Washington are proof that jail isn’t a career killer. Neither is sexual misconduct. Bill Clinton proved that. He continues to be worshipped by Democrats across the nation and narrowly escaped being put right back in the White House as America’s first First Gentlemen despite an election that focused on a Republican candidate’s alleged improprieties.

Racial insensitivity is an entirely different scenario. Those accusations we take seriously and punish severely with an exception we’ll talk about in a moment.

Abandon all hope. No apologies will save you.

Politicians, abandon all hope if you face a career-killing blackface accusation or similar unforgiveable lapse in judgment that treads on a ready and waiting racial land mine. The forgiveness we extend to crimes and a select few personalities won’t work here. It doesn’t matter how far back in time the racial insensitivity police had to go to ferret out your bad behavior.

No apologies will save you. There’s no reason to waste your breath. If I was a politician and had a choice, I’d opt for a criminal conviction and a chance to be elected again. 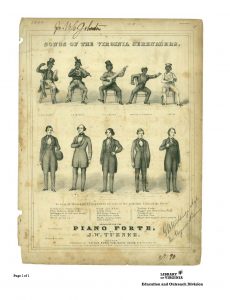 The past returns to our present
Courtesy Library of Virginia1

We tolerate movies, not politicians

Only film geeks will remember a 1970 movie with Godfrey Cambridge with a title that wouldn’t fly for 5 minutes in today’s Hollywood.

Watermelon Man tells the story of a white man who wakes up one morning with a different skin color than he went to bed with. The movie begins with Cambridge’s upper middle class protagonist in whiteface and ends with him becoming a black radical.

How long do you think it would last today?

When money gets involved we are conflicted about racial insensitivity. Slavery was a moneymaker on Christmas Day 2012 when Django Unchained was released. The movie included scenes where a black man is torn apart by dogs and the slave plantation’s owner goes into a long explanation of why black people are inherently less intelligent than whites.

The “N” word isn’t off limits in popular culture, either. It depends who uses it and how much money can be made.

This is a pretty hazy area as far as correctness is concerned. The rules apply differently to different people and walks of life. No one likes to apply them as much as politicians in their frantic efforts to distance themselves from the slightest allegation of racial insensitivity.

In a refreshing change of pace the current outrage is directed at Democrats and not the president. One of those Democrats is going to get off scot-free thanks to colleagues in her own party.

Apologize and get out

In Democrat Northam’s case apologies were acknowledged by Capitol Hill in the same breath with orders to get out:

Governor Northam has apologized for the photograph, but he must now step down and resign from his office to allow Virginia and America to move forward to fully embrace diversity, equality, and acceptance of all Americans.2

Unfortunately, the existence of this photograph does not bring us together. I ask Governor Northam to resign. This isn’t about politics; this is about what is right and wrong.”3

The second statement is from Rep. Elaine Luria (D-VA) and it is not true. This is all about politics. We found that out when Luria joined 24 Democrats to denounce anti-Semitism after Representative Ilhan Omar’s not too surprising comments about money and AIPAC. Their letter to Nancy Pelosi and other party leaders never mentions Rep. Omar by name. It vows to “vigorously confront”4 those spreading anti-Semitism, but only refers to “certain members within our Caucus.”5

The letter does mention Richard Nixon, Charlottesville, white supremacy, and “our leaders” rhetoric,”6 presumably in hopes that some of the negativity will rub off on Republicans and Trump.

Does this mean racially insensitive remarks are less tolerated at the state than federal level, or is just more correct to not attack fellow politicians in your party when they sit in the same room?

It’s hard to know how to reconcile the failure of these Democrats to demand Omar’s resignation or even call her out by name in their written statement with this remark from Rep. John Larson (D-CT):

Comments that invoke anti-Semitism are hurtful to the Jewish community and there is no place for them in the public discourse.7

There may be no place for hurtful, racially insensitive, anti-Semitic remarks but there is obviously still a place for those who make them.

Omar’s apologies didn’t save her. Her fellow Democrats did.

The real problem with Northam and Omar

We pardon criminals, lighten their sentences, put them back on the street, and present them at the State of the Union. Then we take credit for our ability to forgive and forget.

Democrats do not demand Omar’s resignation for racially insensitive behavior in the present, but they insist Northam step down because of a picture from his distant past.

What’s the solution? When forgiveness is off the table, stop apologizing. If you’re lucky, politics will save you.

There should always be serious consequences for actions that demean, intimidate, or threaten our African-American communities. Such conduct is unacceptable for any Virginian—whether occurring in the past, present, or future.8

This is true for racial insensitivity by politicians towards African Americans, but apparently it isn’t true in the House of Representatives for hateful remarks about the Jewish people.

Trump stood up and demanded Omar’s resignation. Thank members of the Democratic Party for standing behind her.

If you need further proof that Democrats protect their own in Congress no matter what they say or do, consider these two statements from Reps. Mark Pocan and Pramila Jayapal.

First they blasted Trump because that’s what Democrats do no matter what the situation is:

Then they expressed their gratitude to Omar:

We appreciate Congresswoman Omar’s heartfelt apology, and the unique life experiences she brings as a public servant.10

And they call Trump’s remarks disgraceful?

There was a ray of hope yesterday and evidence that there is, after all, a limit to what Democrats will tolerate from extremists in their party.

New York Rep. Eliot Engel did not sign the letter from party members who refused to call out Omar for remarks construed as anti-Semitic. He released this statement when she stepped over the line again in a D.C. bookstore last week by impugning:

the loyalty of fellow American citizens because of their political views, including support for the U.S.-Israel relationship.11

Engel called out Omar by name and labeled her remarks for what they are:

Representative Omar’s comments leveled that charge by invoking a vile anti-Semitic slur. This episode is especially disappointing following so closely on another instance of Ms. Omar seeming to invoke an anti-Semitic stereotype.12

This is an astounding rebuke from a party that, unlike Republicans, is too often incapable of not supporting whatever spills from the mouths of members.

Engel is no dummy. There is no better way to drive away voters opposed to discrimination in any form than by tolerating outrageous, even hateful remarks from an extremist upstart with the press coverage to turn the party on its head.

This is strike two. Will we hear Democratic Party demands that Omar resign, or will she push the envelope with strike three?