It’s true. Republicans didn’t do much last year to stop gun crimes. It’s also true that they never said they would, while Democrats spent 2017 double-dealing over gun violence. If the Democratic Party truly seeks justice for gun crime victims it needs to be fair and just about how it wants the law to be enforced. Instead, the party stood by while members refused to speak out against politically valuable offenders.

In 2017 we saw a plethora of anti-gun legislation in search of a win that was never going to come.

69 Democrats, including 16 from California and 3 lone Republicans1 got behind H.R. 1475, the Gun Trafficking Prevention Act of 2017. The Democratic Committee on House Oversight and Government Reform justified this bill:

In the past, the Committee has heard directly from law enforcement officials that a dedicated firearms trafficking statute would help them combat the flow of thousands of firearms to violent criminals, international drug cartels, and a host of other dangerous people.2

These “dangerous people” should include the immigrant who killed Kate Steinle and the drug dealers convicted of gun crimes forgiven by Obama. We can add one of the illegals just pardoned by sanctuary state Governor Jerry Brown despite being convicted of a weapons charge. As the Gateway Pundit observed, this was just one of many year-end pardons that thumbed California’s nose at the president.

Criminal alien gang members are also dangerous people. They would be deported under H.R. 3697, the Criminal Alien Gang Member Removal Act. This bill to protect the public from gang violence was vigorously opposed by Democrats who persist in scaring their supporters about the threat of Republican-sponsored legislation. 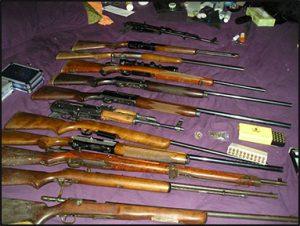 2017 brought plenty of opportunities for finger pointing like this dire warning from Rep. Louise Slaughter (D-NY) about H.R. 38, the Concealed Carry Reciprocity Act:

Let’s be honest with the American people about its effects – if this bill passes, violent offenders with loaded handguns could be coming to a community near you. Even if you reside in a state with tough gun laws.3

This legislation is terrible public policy, and it caters to some of the worst themes of our current public discourse, particularly at a time when some national leaders are fomenting division in our communities.4

The jab at Trump aside, one of the worst themes in public discourse is allowing partisanship to choose which crimes to punish. That’s what Democrats did in lieu of facing facts.

Strengthening national security was part of the Democratic alternative budget for 2018:

The party seeks to create more offenders. For example, foot in the door bill H.R.3984, “Equal Access to Justice for Victims of Gun Violence,” makes gun tracking easier and opens the industry to civil suits. The legislation would:

repeal the Protection of Lawful Commerce in Arms Act, and provide for the discoverability and admissibility of gun trace information in civil proceedings.6

Despite cries to reduce penalties and mandatory minimums for drug crimes and applauding Obama for pardoning offenders, Democrats still called for harsh punishment for illegal firearms purchases. Their Gun Trafficking Prevention Act of 2017 included penalties of up to 20 years for “straw purchasers.”7 Meanwhile, they denied justice to gun crime victims by ignoring threats from illegal alien criminals and drug traffickers whose activities fuel gun crimes.

There is more than enough hypocrisy to go around here. Democratic mayors, governors, senators and House members all had a hand in attacking the GOP for being soft on guns while they attacked Trump’s immigration and security policies. At the same time they refused to step up and enforce laws we already have that would reduce the number of gun crime victims.

When President Trump passed an executive order to help victims of crimes committed by illegals Democrats not only cried foul, Colorado’s Jared Polis proposed just the opposite:

Today, Rep. Jared Polis, D-Colo., announced that he is planning to start the Saved by American Immigrants National Taskforce or “SAINT” to collect stories of immigrants – both documented and undocumented – who have positively contributed to U.S. society through heroic or lifesaving acts.8

If there is such a thing as head in the sand politics Congressman Polis nailed it, but don’t blame him. He’s only following his party’s example.