When I think about what forgiveness means to America I can’t help but remember the long list of Obama pardons and commutations, including the 231 inmates who got lucky1 near the end of his presidency. The Justice Department put the numbers out for all to see. Even Lyndon Johnson didn’t come close to what Obama accomplished. 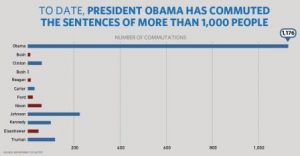 Gun crime forgiveness when the politics is right

The people deemed worthy of the president’s special attention included drug dealers accused of gun crimes alongside narcotics trafficking. Despite the left’s obsession with gun control even firearms are forgiven if politics demands it.

We made a judgment that the harsh sentences were motivated by unfair sentencing and skin color. It was politically-motivated forgiveness, but it’s easy to convince ourselves that it was moral and ethical, too.

A law and order president might do just the opposite. In fact, the drug war frenzy under a very different Reagan administration started the mandatory minimum sentencing guidelines we became so eager to tear down.

Now we’re thinking about restoring those sentences. Again, it’s a political decision over what we forgive and what we harshly condemn.

Elements in our society insist on forgiveness for prison inmates, illegal and criminal immigrants, and people injured or killed by the police while committing a crime. This kind of forgiveness is all about the politics of the day and the kind of morality and ethics that puts people in office and brings in cash for special interests.

Politicized forgiveness is not something we should be proud of or thankful for. It doesn’t last and can change with something as simple as an election. That’s what happened last year. Now the same people who dished up forgiveness for criminals can’t remember what the word means. Instead, they decided that being white and male is a crime that must be pursued on all fronts.

There will be no forgiveness for the multitude of personalities who are accused. They are guilty as charged, the facts brushed aside, any chance of redemption off the table.

A heavyweight crack dealer charged with a gun crime who received an Obama pardon has a chance to rebuild a lost life. A well-to-do celebrity or politician charged with sexual misconduct that took place years ago is finished. These people can’t change, or at least that’s our judgment.

Are we being just?

In most cases we will never know because we don’t wait to find out the facts or question whether a crime was committed. We condemn, discard, and then go hunting for the next witch to throw on the pyre.

Hopefully in our rush to judgment we’re getting it right, or else we will have to cook up some forgiveness for ourselves at Thanksgiving next year.

Long-time Texas Republican Joe Barton was snagged by the national harassment scandal for no good reason. What he does on his own time should be his own business if it doesn’t break the law.

An embarrassing picture that has nothing to do with policy or the job taxpayers pay the congressman to do shouldn’t be a cause for sanction or dismissal. The biggest damage done is offering further proof that Americans are inveterate hypocrites.

We regard members of Congress as liars, thieves, and crooks. Are we so puritanical that we think a supposedly lewd photo is worse?