Home » Illinois » Illinois TRUST Act: There is Nothing Trustworthy in SB 31

Illinois and California share a lot of bad ideas. One is allowing their illegal residents to drive so they can easily get to work or school. Passing the Illinois driver’s license legislation was an enormous violation of the public trust even considering that the trust of taxpaying citizens is already a lost cause. Now our state is following California’s lead with SB 31, the Illinois TRUST Act. The bill is awaiting Governor Rauner’s signature. Critics call it a sanctuary state bill. Proponents talk about trust in immigrant communities.

The fact is that the Illinois TRUST Act is untrustworthy. It is a fundamental violation of our public trust and another egregious example of why citizens have no confidence in Illinois government.

The Illinois TRUST Act is run of the mill sanctuary legislation. It shields illegal immigrants from federal law using the excuse that they must be able to trust the police and won’t come forward if they fear being nabbed because of their status.

SB 31 puts a barrier between federal and state and local law enforcement. It blocks detainer holds in lieu of a warrant, a fundamental sanctuary policy championed in Chicago. It prevents the police from taking immigration status into account. If you are interested in the details, the text of the bill is on the Illinois General Assembly website.

The TRUST Act is based on the premise popular in liberal Democratic circles that illegal immigrants have the same rights as citizens as long as they don’t commit crimes, though what constitutes criminal behavior is becoming a matter of contention as well. The TRUST Act is all about requiring law enforcement to overlook an obvious affront to taxpaying citizens. Arguments that it turns the Land of Lincoln into a sanctuary state have merit, particularly in the legislation’s provisions for federal immigration holds. 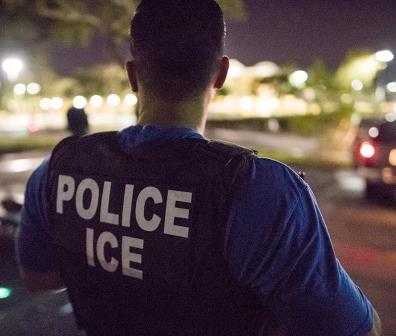 Will Rauner say no or violate our trust?

Activists have been panting for weeks over the possibility that Rauner will affix his signature to this bill. The Capitol Fax reports that the governor believes SB 31 is reasonable and it is backed by local law enforcement officials. That’s not the issue. The problem with the Illinois TRUST Act is that it’s not possible to pass this law without abusing it. SB 31 is foot in the door legislation. It offends less by what it does than by what it implies.

How can we trust a law that protects lawbreakers?

If Rauner signs the Illinois TRUST Act he will force us to accept the idea that states and cities should protect immigration violators because they belong here and we depend on them as much if not more than they depend on us. The fact that sanctuary laws attract illegals good and bad is not a consideration. Neither is the Chicago public school system, famously out of cash before the newest deal was cooked up in Springfield yesterday for the new school year.

Every seat in every classroom costs money to fill, but for Springfield the cost of public services is just collateral damage to taxpayers. Unlike the people protected by SB 31, we have no choice but to pay state and federal income taxes and local property tax.

Another foot in the door for activists

Demanding a warrant from ICE sounds good, fair, and reasonable but immigrant rights advocates do not recognize boundaries. In a state already rife with abuses this bill codifies the message that being in Illinois illegally has protected status. Taxpayers exist to fund the consequences.

Taxpayers need to trust, too. We can’t do that when our state’s lawmakers wring their hands over education funding, can’t pay the bills, whack us with another income tax increase, and then decide to shield residents who have broken the law and add costs to education and strained public services.

How can the public trust a law that protects lawbreakers? We can’t. When politics supersedes common sense and what is right there can be no trust between citizens and government. Fortunately for Illinois we lost that trust a long time ago. Whether there is any more available to lose is a question up for grabs.

He shoved conservative trust aside, put pen to paper, and turned the TRUST Act into law. We’ll know who to thank after he is defeated by a Democrat next year and the foot that was just shoved in our door for the benefit of illegal immigrants is replaced by a boot. Remember, we wouldn’t have to worry about their fear of communicating with authority figures if we hadn’t made it so comfortable for them to live, work, and go to school here. Why do we feel duty bound to keep repeating the same mistake?

It’s going to be a tough road for Illinois conservatives reconciling Governor Rauner’s recently announced reelection bid with his signature on the TRUST Act and the follow-up, a bill to spend more taxpayer dollars on abortions.

Most of us support compromise when it accomplishes something good, but that’s not happening and these two bills are an affront to too many who put this man in office.

We’re running out of reasons to vote for Rauner again. While spots for JB Pritzker threatening more taxes on the wealthy assault our sensibilities, is there a conservative Republican with the courage to take a chance?

UPDATE February 9, 2018: Does sexual assault only matter to the rich and famous?

With a controversial video from Republican Jeanne Ives focusing attention on a bill that many Illinoisans probably haven’t heard of, it’s illuminating to see what ICE turns up when it cracks down on Chicago area illegal immigrants.

A sweep early in January rounded up aliens for a variety of offenses including criminal sexual assault, sexual assault of a child, drug possession, domestic assault, and re-entry after deportation. One of the immigrants was a gang member from Mexico who had received two DACA extensions.1

You can read more about how ICE makes our state safer here.

How ironic that in liberal Illinois, where a Republican governor is beaten down into signing a bill like SB 31, the #MeToo movement has lost to illegal immigration. Is Illinois sending the message that sexual assault only matters to rich people?

Apparently declaring Illinois a sanctuary state wasn’t good enough. SB 35, the Immigration Safe Zones Act, extends the trendy anti-ICE furor by establishing places within the state that are off limits to immigration enforcement. The bill calls for “limiting assistance with immigration enforcement to the fullest extent possible”2 and ironically, puts the Illinois Attorney General in charge of not enforcing the law.

SB 35’s safe zones include state-funded schools, health care facilities, libraries, Illinois Secretary of State offices, and in another swipe at the rule of law, courthouses.3

Activists are loudly demanding Rauner’s signature. The governor’s race is heating up. He’s already made Illinois a sanctuary state, so a liberal foot-in-the-door bill to creates safe zones where undocumented immigrants can find even more sanctuary than they already have doesn’t seem like too great of a leap.

So here’s the question: who comes first? Conservative Illinoisans who put Rauner in office to counter the Democratic establishment, or the governor’s hopes to lure voters away from J.B. Pritzker?

Last week Governor Rauner did the right thing and killed SB 35, the newest Illinois sanctuary policy bill along with a companion overstep, the “Voices Act.” This legislation sought to speed up the visa process for illegal immigrant crime victims who cooperate with authorities.

A third bill that offered protection for illegal immigrant tenants also fell to the governor’s veto power. Anger from immigrant rights groups was swift, but how about his Republican base of support?

Conservative Illinoisans aren’t going to forget the Trust Act no matter what Rauner does or doesn’t sign before the gubernatorial election. The bill was cheered by Rep. Luis Gutierrez because it:

strengthens the statewide firewall between federal immigration and deportation issues and the enforcement of law by state and local police, thereby enhancing public safety.4

We just saw in Iowa how much protecting illegal immigrants enhances public safety.

A Republican governor turning Illinois into a sanctuary state is a tough thing to reconcile with the national liberal Democratic push for open borders and amnesty. Rauner’s abrupt about-face on these bills is welcome, but it won’t take the TRUST Act off the books.

Rauner is gone but his SB 31 sellout is still with us. State Democrats wasted no time after JB Pritzker took over to begin expanding what the Trust Act offers illegal immigrants.

State officials and the governor turned the Trust Act into a battle between President Trump and a state so mired in debt that it shouldn’t be giving away anything to anyone. Nevertheless, lawmakers determined to dig taxpayers a deeper hole talked of immigrants seeking better lives who are tormented by the president.5 To ensure that Illinois is as welcoming as possible the governor expanded the Trust Act with Executive Order 2019-07,6 which saddled every Illinoisan with values that many of us don’t agree with.

In all honesty the order doesn’t accomplish anything of real substance. It speaks of welcoming centers and “Know Your Rights” information for immigrants. It makes a statement based on the ongoing Democratic Party fraud that there is no difference between immigrants that do the hard work required to come here legally and those whose first act in America is to shun the system and break the law.

The sanctuary state bill is a dangerous foot in the door for Democrats firmly in control and a governor who has dangled a state health care program in front of taxpayers drowning in debt. There can be no trust between state residents and a liberal hegemony determined to advance itself at our expense.

Using illegal immigrants to help get that job done is an unforgiveable breach of the public trust.

Updated December 24, 2018 to remove broken link. No changes to the text were made.