As taxpayers do we pay to crack down on illegal workers or do we pay to protect America’s immigrant workforce? The answer is both. We fund enforcement to control illegal labor. Then we pay again because Congressional Democrats obstruct our efforts. That’s only part of the cost illegal workers dump on the U.S. economy, but don’t expect to hear that from liberal House and Senate members who insist that immigrant labor is what floats the U.S. economic boat.

In truth, illegal immigration only floats the Democratic Party’s boat. If illegal workers contribute to anything, it’s party propaganda that brings in votes for all the wrong reasons.

The economy is an easy excuse for unscrupulous employers and politicians to condone illegal labor. Liberal-leaning citizens and their media sources believe that illegals have no cost, so they don’t worry about where their tax dollars are going. 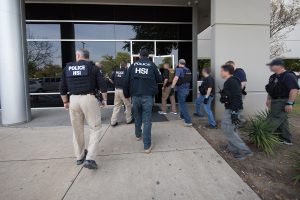 Too bad for the rest of us. That’s the sort of thinking behind laws like the January 2019 New York Dream Act and its illegal immigrant scholarships. It’s also why states are increasingly in favor of issuing driver’s licenses to the undocumented so they can travel to their jobs while government agencies pursue the employers who hire them.

While we support illegal workers, put them behind the wheel, and hand them scholarships our kids are begging for, this April 2019 news release came out of Allen, Texas:

HSI arrested on administrative immigration violations more than 280 CVE company employees who were unlawfully working in the United States at this telecommunications equipment-repair business.1

If your tax dollars mattered one cent this wouldn’t make any sense.

Immigrant workers help boost our national economy and have worked hard for generations to make this nation what it is today – a beacon of hope and prosperity. As we celebrate May Day as a day to support and promote labor and worker’s rights, let’s take a stand to protect the liberties of freedom and opportunities that we hold dear as a country and renew our fight against attacks on immigrant workers and families in communities around the nation.2

America doesn’t attack immigrant workers. That’s not what this country is all about despite the ongoing efforts to portray the U.S. as an anti-immigrant hellhole.

We do enforce the law against illegal workers and their employers. When that happens Democrats claim immigrants and their communities are attacked by the nation they built. That’s a damaging lie the party must be held accountable for.

Instead of accountability we get legislative proposals like the Protect Our Workers from Exploitation and Retaliation (POWER) Act:

The bill will also strengthen labor agencies’ investigative powers and allow a stay of removal and work authorization for workers who file a workplace claim. At a time of increasing workplace raids, discrimination, and threats against immigrants, these reforms will protect workers from employers who use illegal business practices and threaten workers with deportation if they go to the authorities.3/sup>

At least we can all agree that criminals don’t feel comfortable going to the police.

We aren’t getting rich from our illegal economy

According to the Bureau of Labor Statistics foreign born labor makes up 17.4% of our workforce. In 2018 that meant 28.2 million workers.4

How much of this immigrant labor is illegal? We don’t know. Illegal immigrant status isn’t something most workers volunteer when they sign up for a job and it’s not something employers worry about when they want to get their work done on the cheap.

Despite liberal assurances that immigrants are the backbone of the U.S. economy the illegal type won’t make us rich. Blurring the distinction so Americans will buy into party propaganda is perfectly legal fraud. Suffice it to say that there aren’t many nuclear physicists in migrant caravans. We won’t find a lot of physicians and CEOs wandering around the desert with illegal drugs Democrats assure us don’t exist, either.

We do know that illegals are a cost to our economy and to taxpayers whether or not they work. In fact, we’ve known how damaging they are for decades while we are taxed on their behalf.

However, researchers disagree on the amount of revenues illegal aliens generate and the extent to which these revenues offset government costs for benefits and services.5

The literature on the public fiscal impact of illegal aliens reflects considerable agreement among researchers that illegal aliens are a net cost, though the magnitude of the cost is a subject of continued debate.6

That continued debate is a stumbling block. Democratic Party propaganda successfully stripped “illegal” and even “undocumented” out of the argument, which makes it easy to call Trump a liar,7 spread disinformation, and blur the truth:

Immigrants create millions of jobs in the United States, foster vital innovations, and contribute over $12 billion a year to our Social Security fund. 10% of Americans rely for their employment on private companies owned by immigrants.8

The party also creates lots of work for the federal agents they blame for cruelty and overzealous enforcement. The massive influx at the border is not the only surge officers have to contend with:

Democrats refuse to acknowledge the enormity of the costs they dump on taxpayers by obstructing a secure border. Instead, they bolster their fiction by calling Trump a liar for warning about criminal aliens.

Over a seven year period we locked up illegals responsible for 663,000 criminal offenses including 7,156 sexual assaults and 1,351 murders.10

That’s bad for taxpayers. Incarceration is expensive. Newly-proposed legislation seeks to reimburse states and localities for these costs which, according to the Justice Department, total $1,458,372.72/day for the 16,233 aliens held by the U.S. Marshall Service.11

Illegal immigration costs America a tremendous amount of money — even very conservative estimates place the cost at over a hundred billion dollars per year. These costs come in the form of government programs and benefits (like education and healthcare), and are never reimbursed because most illegal immigrants pay no income taxes. Illegal immigration costs America in other ways, too — from lost jobs and lower wages, to the social costs of drugs, gang violence, and increased crime rates.12

$100 billion is a lot of money. It turns the president’s border wall funding request into pocket change.

While you continue to pay and listen to liberal politicians who question why you aren’t getting ahead financially despite the millions of immigrants here to put money in your pocket, consider who they really want to help with their rhetorical cover-up.

Later, when you see footage of another caravan amassing at the Southern border see if you can pick out our next Nobel Prize winners.

Don’t look too hard. They aren’t there.