An In the News post from Congresswoman Ayanna Pressley (D-MA) accuses ICE of being a “rogue, corrupt agency.”1 Pressley and other Democrats oppose funds to ICE and Customs and Border Protection on principle despite new reports from CBP of “unprecedented volumes of aliens”2 streaming into the Texas Rio Grande Valley Sector.

That not the only problem ICE has to contend with.

Before Dems parrot the liberal party line and obstruct greater enforcement funding they should have a look at what this agency does. Instead, they stick their heads deep in the sand, recite anger-inciting words taught to them by activists, and ignore the fact that ICE battles crimes like child pornography and drug smuggling. 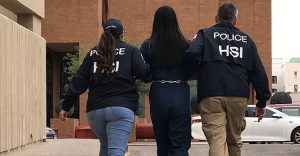 Pressley joined extremist darlings Alexandria Ocasio-Cortez (D-NY), Rashida Tlaib (D-MI), and Ilhan Omar (D-MN), who has had a few PR problems of her own lately, to trot out the immigrant diversity argument. They claim ICE and CBP funding are:

a slush fund to incite terror in immigrant communities.3

That’s embarrassingly naïve and uninformed. Like Nancy Pelosi’s recent comments about the April jobs report they offered harsh words but no facts other than the amount of the funding they oppose on principle because it goes to immigration law enforcement.

You can say you oppose ICE funding for the sake of a press release and you can also do something about it. New House bills seek to do exactly that.

The defund ICE movement is not new this year. What is new are more bills to restrict the agency’s ability to function.

Ensuring funding for body cameras for CBP agents is critical in our abilities to ensure that both agency personnel and individuals who are targeted and detained by agents are held accountable and that there is transparency and integrity within the agency,” said Rep. Adriano Espaillat (NY-13).5

Rep. Veronica Escobar proposed H.R. 2203 to improve Homeland Security by spending on “accountability and oversight.”6 Her bill summary doesn’t mention cost and neither does the bill, though her Democrat-friendly new bureaucracy won’t come cheap.

What “safe community” means to a Democrat

In safe communities like El Paso, the most successful law enforcement leaders are those who participate in transparency and community engagement.7

Perhaps she missed the ICE report of illegal alien smugglers swept up in this safe community. The arrest of a suspect in El Paso on child pornography charges may also have flown under her oblivious Democratic radar:

If this is about our values, what values does opposing ICE enforcement funding support?

House Democrats take seriously our responsibility to uphold our values and secure our borders.9

Upholding those Democratic Party values includes impairing an agency that battles child pornography and drugs and will be forced to reallocate resources due to funding shortages loyal party members are determined to exacerbate:

Rather than reward CBP and ICE for the agencies’ fiscal mismanagement and deliberate defiance of congressional intent and the Constitution—not to mention their long list of human rights and civil liberties abuses—we ask our colleagues to hold these agencies accountable through the appropriations process.” the [Congressional Hispanic Caucus] Members wrote.10

Not to be outdone, 20 Senate Democrats rose to the call for no new ICE funding:

Second, we urge the Committee to reject President Trump’s request for funding to hire additional ICE agents at this time. Under current funding levels, the administration has expanded immigration enforcement within American communities indiscriminately …12

I can’t think of any American values that support child pornography, but that’s what Democrats do when they try to choke off funds for a government agency that has to constantly reallocate limited resources and triage the most dangerous threats.

The following excerpts are from ICE enforcement news releases:

A Southeast Texas man, who was convicted for sexually assaulting a child in 1984, was sentenced Tuesday to 15 years in federal prison for distributing child pornography.13

This is from last week:

A Chicago-area musician was sentenced Friday to 10 years in federal prison for enticing several underage girls, some as young as 14 years old, to produce sexually explicit videos of themselves.14

A local Tucson man was sentenced Monday to 90 years in federal prison for production and distribution of child pornography.16

Which comes first, families or politics?

Without a nod to these enforcement successes that protect children, Florida Democrat Debbie Wasserman Schultz proposed The Families Not Facilities Act that would, among other things:

Transfer funding from ICE enforcement and removal to the DHS OIG to investigate child separation.17

Democratic demands to shift funding away from enforcement to protect illegal immigrants and migrant trespassers have consequences. One of these will be less money available to battle evils like child pornography and illicit drugs that endanger everyone who lives in America legally or otherwise.

It should be obvious that this isn’t about values, families, or doing the right thing. This is about politics gone horribly wrong and a party so wrapped up in its ridiculous pro-illegal immigration rhetoric that it is incapable of seeing the kind of damage done by opposing funds to an agency that does a lot of good in places most Americans never hear about.

UPDATE May 12, 2019: new ICE victories in the face of Democratic damnation

We will also continue to push for answers from this Administration as we uncover the facts of the family separation policy and hold Trump, DHS and Immigration and Customs Enforcement (ICE) accountable.19

There are rabbit holes aplenty for the House to investigate whether they come from Russia, the DOJ, or Latin America.

There is also damnation aplenty in blanket statements from lawmakers.

At the end of the day, it all comes down to the same thing. An “appalled”21 Rep. David E. Price (D-NC) complained:

In February, ICE carried out numerous enforcement actions in my own district and across the state of North Carolina. Agents arrested over 200 individuals in one week, many of whose only crime was being here without documentation.22

This raises the question of what the other crimes were. Price didn’t say. We know his party doesn’t recognize illegal entry as an offense. In fact, it’s on the verge of becoming a badge of honor..

Presumably there are still some offenses on the books that Democrats believe we should prosecute.

We can only hope that one of those crimes is sex trafficking. ICE reported on May 9, 2019:

On Wednesday, May 8, the United States Attorney’s Office for the Eastern District of Pennsylvania, announced that a Glenside, Pennsylvania, woman, pleaded guilty to the crimes of possession and distribution of child pornography, following an investigation by U.S. Immigration and Customs Enforcement’s (ICE) Homeland Security Investigations (HSI) Philadelphia investigation.24

Democrats are correct. This is all about values. Which values are they willing to let go and who is collateral damage in their battle to score political points against ICE?

16. “Tucson man sentenced to 90 years in prison for production and distribution of child pornography.” Immigration and Customs Enforcement. May 8, 2019. https://www.ice.gov/news/releases/tucson-man-sentenced-90-years-prison-production-and-distribution-child-pornography, retrieved May 9, 2019.

Image: ICE photo retrieved from https://www.ice.gov/news/releases/ice-el-paso-special-agents-arrest-local-man-child-pornography-charges on May 9, 2019.

Author’s note: edited after publishing for clarify and content on May 11, 2019.