Democrats take advantage of every opportunity to obstruct collaboration between state and local law enforcement and federal immigration authorities. They can’t and won’t admit that criminal aliens cross the Southern border to set up shop in the U.S. As time passes and the evidence mounts they only dig in their heels and resist every effort to get the truth out to the public and do something about the problem.

Homeland Security Secretary Kirstjen Nielsen told the nation what we already knew after a recent journey to Texas:

It should come as no surprise that criminals don’t care about borders.1

In Fiscal Year 2018, our 287(g) partners had over 25,000 encounters with known or suspected criminal illegal aliens. This resulted in over 7,000 criminal and immigration violator removals in Fiscal Year 2018.2

Democrats responded with misinformation and propaganda. 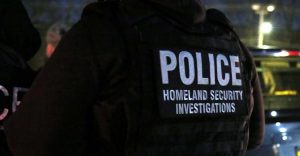 Opposition to 287(g) grounded in propaganda

Despite DHS figures and evidence proving that we have a problem, Democrats on the House Judiciary Committee delivered a fact sheet to the public blaming the Trump administration for perpetuating immigration fiction. They claimed:

While this may be true, it doesn’t mean that we should let criminals into the country.

They also assured us that:

The southern border is more secure than ever.6

It’s not clear whether this matters or what “more secure than ever” means. Democrats claim that interdictions are lower than they have been in many years.7 That doesn’t make 7,000 removals and 25,000 “encounters” in one year a positive sign.

Illegals wandering in the desert with 6 lbs. of methamphetamine isn’t a positive sign, either.

Meth by the pound in the desert

We are repeatedly assured that drugs only enter at ports of entry. Read what agents discovered in a CBP March 21, 2019 press release and then consider this statement from Rep. Sheila Jackson Lee after a bust at the Nogales, Arizona entry point proclaiming there are no drugs in the desert:

Today’s announcement is important not just because it stopped the flow of illegal drugs, but because it confirms what experts have long maintained—that illicit drugs enter our borders through legal ports of entry, and not through the desert where the President would like his border wall built.8

CBP continues to intercept drugs that aren’t coming in at these regulated points of entry. This was from March 2, 2019:

Border Patrol Agents working along the border near Fort Hancock observed three individuals entering the United States illegally by walking across the mostly dry Rio Grande River. When agents confronted the suspects they noted that all three were carrying backpacks of what appeared to be illegal drugs. The three illegal aliens were taken in to custody and the drugs seized.9

6.9 lbs. of meth in June 2018 wound up on the banks of the Rio Grande. Border Patrol agents confirmed:

In this instance, it appears they attempted to swim drugs across the river, in a populated area, and potentially blend in with local citizens.10

When criminal aliens get into the country with or without drugs Democratic Party endorsed sanctuary policies protect them from federal agents. That’s where 287(g) enters the picture.

The push to quash 287(g)’s role in rounding up criminal aliens is not new. Neither is the opposing effort to keep the program active.

In 2012 54 members of Congress sent a letter to Barack Obama opposing his effort to slash program funding.

My bill would put an end to this practice once and for all and ensure local police are not accomplices to this Administration’s immoral federal immigration policies.11

The bill went nowhere. John Lewis (D-GA) followed up in 2018 with a letter to Homeland Security that turned 287(g) successes into a travesty. The congressman lamented:

Seventeen state and local police forces in this area participate in the 287(g) program [2], and Gwinnett County, Georgia, accounts for more than one-fifth of all 287(g) arrests nationwide [3].8

It’s 2019. Democrats still deny that criminal aliens are a problem despite Nielsen’s alarming figures and routine CBP updates from the Southern border.

So far this has been a win-win for Democrats. Sanctuary policies remain intact. Kate’s Law is not a law. Neither is the Criminal Alien Gang Member Removal Act.

5. “The Truth on Immigration: Unmasking the Fiction Perpetuated by President Trump in His Address to Congress.” U.S. House Committee on the Judiciary. Democrats. https://judiciary.house.gov/sites/democrats.judiciary.house.gov/files/documents/The%20Truth%20on%20Immigration%20Judiciary%20Fact%20Sheets.pdf, retrieved March 24, 2019.