I choked on my lunch when I heard Nancy Pelosi’s remark about a climate of dignity and respect in Congress.1 Maybe she is moonlighting at some other congress we don’t know about. She can’t mean the one on Capitol Hill.

Pelosi’s comment is just another example of the outrageously inflated regard this motley collection of crooks, liars, and thieves gone legitimate hangs onto despite all evidence to the contrary. There is no correlation between how members of Congress see themselves and how they are viewed by Americans not lucky enough to have a gig in national politics, but since they hold all the cards it doesn’t really matter. 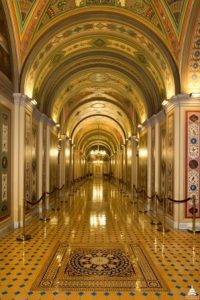 No dignity and respect in these words

I’m not sure where we are supposed to look for dignity and respect in Washington. We won’t find it in the venom of the ever-bombastic Democratic minority.

For Pelosi the Republican tax reform proposal she and Rep. Chuck Schumer refused to sit down with the president to discuss earlier this week is the “Same Old Tax Scam.”2 Trump’s choice for a new head for the Consumer Financial Protection Bureau is a “sham.”3

There is no dignity or respect in a member of the House telling the American people he is ashamed of the president. The words are destructive, not constructive. People listen. Too often we believe without considering the source.

Dignity and respect in tragedy?

The victims of mass shootings deserve dignity and respect. Instead, 397 deaths4 are fodder for Democratic Caucus Chairman Joe Crowley. The congressman made the nonsensical statement that a concealed carry law will allow predators to secretly carry guns.5 Then he made a promise to the people no one can keep:

Americans overwhelmingly want Congress to pursue commonsense gun safety measures that will prevent mass shootings and violence in our churches, our schools, our communities, and our homes.6

Prevent mass shootings? It almost makes me want to back liberal gun control measures to see how Democrats will explain away the next tragic incident they can’t prevent because we can’t make every gun in circulation disappear. Luckily, lawmakers have an endless series of excuses that let the consequences of their words and deeds slide off their shoulders while they evade responsibility. It’s not a difficult task. In a climate of despair created by the House and Senate Americans want very badly to trust what they hear.

At least there is one thing we can trust on Capitol Hill: how elected officials view our role in advancing their careers.

5 ways Congress shows you no dignity and respect

It’s a lot less bothersome to see how little dignity and respect elected officials have for themselves and their colleagues than it is to think about how little they have for us. We are a tool for rhetorical warfare and that’s about as far as it goes.

1. Congress threatens essentials we depend on and members take for granted, like health care. Senators and representatives don’t have to worry what happens with the Affordable Care Act except for the impact on their reelection dreams. They can always tuck a measure into legislation to take care of themselves.

2. In the never-ending fight for ownership of our incomes lawmakers insult our intelligence by blaming the rich for Congress’s spending problem. They ignore the fact that most elected officials are also rich by Middle America’s standards and that entry to the hallowed halls of Capitol Hill is based on income no matter which party you belong to.

4. Members of Congress stage drama, issue threats, spread fear, and further disrespect our dignity by preying on the uninformed. A favorite ploy is threatening to shut down the government.

How many of us don’t think we’re better off when this happens?

5. The blame game is more important than policy. As long as someone else is responsible for your failures the problems you create for the people who elect you don’t matter.

6. No matter what they tell you, lawmakers will always put themselves first. If a seat in Congress wasn’t a prize senators and representatives wouldn’t fight so hard to hold onto these jobs for a lifetime. What happens to us in the process is collateral damage, pure and simple.

Trump is a genius: what he understands about dignity