And to see this person who wants to be the one Representative in the House of Representatives from Montana, sort of a wannabe Trump, you know, use language like that, treat people harshly like that that’s his model. Donald Trump is his model.1

It’s open season on anything remotely Republican, even when the comments are so outrageous that only a complete idiot would believe them. This is rhetoric for morons, the malcontents who destroy property, riot, disrupt town halls, and eagerly lap up the nonsense distributed by politicians terrified of losing their grip on the nation. 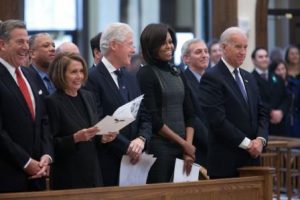 Pelosi and pals rub elbows
Why do we listen to these people?
Official White House Photo by Chuck Kennedy

These days Democratic rhetoric is all about inflaming a situation past the bounds of reality. After the Gianforte incident Pelosi tried to mobilize the press during a press conference, a pointless gesture considering the media is already in her party’s back pocket. She talked of a “beautiful Constitution and the First Amendment,”2 ignoring the efforts of party adherents to suppress conservative speech and deny Republican voters the president they elected.

Virginia’s Gerry Connolly also jumped into the fray. As The Hill reported, the congressman claims that violence is a ‘hallmark’ of the ‘Trump era.’3

If these remarks are true and this is not just another anecdotal account blown out of proportion by a party with little to lose, then we have to consider a few other unfounded, unproven allegations about Democrats that follow Pelosi and Connolly’s sweeping generalities.

5 allegations for Democrats who believe Pelosi

1. All Democrats will become sex offenders or adulterers

Anthony Weiner was just convicted in a sexting scandal. Bill Clinton was impeached and acquitted after his dalliance with an intern. We watched the Mel Reynolds and John Edwards scandals unfold. Were these transgressions caused by Democratic Party politics, perhaps by a long-lasting “Clinton Effect”? Watch out. If Trump can turn Republicans violent, then one day all Democrats will become adulterers, sex offenders, or worse.

2. Violence is the solution

Left wing violence has visited college campuses, cities, and even Trump’s inauguration. Liberal activists disrupted conservative rallies during the campaign season and there are ongoing reports of town halls turning into free-for-alls.

If Trump is responsible for Gianforte’s actions, then someone at the top of the Democratic Party must be responsible for these violent disruptions. After all, no good Democrat would believe that an American is capable of independent thought or action. Who is responsible? Is Pelosi whipping her flock into a frenzy?

3. All Democrats break the law

Activism shouldn’t supersede the law, but more than one Democratic House member has been arrested for acting on their beliefs. Illinois Rep. Jan Schakowsky was nabbed at an immigration rally with activist congressman Luis Gutierrez and other House members.4 Congressman Al Green holds the same honor.5 Gutierrez can claim it more than once.

Compared to Pelosi’s one man example, this is an overwhelming number of Democratic lawmakers arrested in a very public way and offering a very bad example to our children.

Will there be an outbreak of liberal congressional lawbreaking? Should we shield our kids and hide in our homes?

4. All Democrats are corrupt

Look no further than Illinois. If that isn’t enough, travel down to Florida and the Corrine Brown corruption case.

If we buy Pelosi’s reasoning, then we have to believe that there is a culture of Democratic corruption. Sooner or later every Democrat will put their hands in the till.

It’s only a matter of time.

This one, at least, is true. Pelosi and her kind would rather destroy this country with division than work with a Republican president. Their words show fundamental disrespect not only for the president, but for our laws and institutions.

There is precedent for this, of course. According to our last First Lady it wasn’t until her husband had a shot at the biggest job in the nation that she could be proud of America.

I am ashamed that he is our president.6

That’s the message Democrats send to the American people and the world.

More of us need to stop listening to politicians like Pelosi, Connolly, and Moulton and start being ashamed of the Democratic Party and its angry, vengeful leadership.

Postscript: as you probably know, Mr. Gianforte won the election. They must be fed up with Pelosi and her kind in Montana, too. Congratulations, congressman.

At the end of a tough week that brought us an attack by radical Islam in Great Britain, Pelosi used the start of Ramadan to make another sweeping generalization:

In a time marked by a shameful rise in hateful attitudes toward Muslim Americans, let us affirm the duty of all Americans to speak out against bigotry and to uphold the dignity of all.7

She doesn’t qualify what a “shameful rise” means, but it sounds like she is suggesting that Americans hate Muslims.

Her remarks were made the same day two men in Portland, Oregon died trying to stop an anti-Muslim diatribe.

7. “Pelosi Statement in Observance of Ramadan.” Nancy Pelosi. May 26, 2017. http://pelosi.house.gov/news/press-releases/pelosi-statement-in-observance-of-ramadan, retrieved May 29, 2017.