During the Democratic Party’s Election Security Week of Action Nancy Pelosi’s remarks at a press conference make it clear what her party’s Save our Democracy call to action means:

They dishonor the Constitution. They degrade the environment from land. They denigrate the diversity that is the beauty of the mix of America and they undermine our values as a country, who we are as a country.1

None of these things have anything to do with secure elections, but you can probably guess who “they” are.

America offers the left targets aplenty including an American flag torn down and replaced with the flag of Mexico at an Aurora, Colorado detention facility last Friday after weeks of Democratic harangues about the mistreatment of migrants.

That American flag is a good symbol for what saving our democracy means to Democrats. They want to replace it with something else that doesn’t look anything like America. 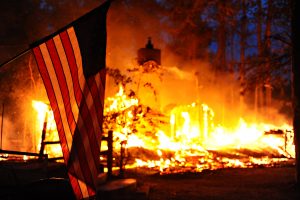 Manipulating public opinion will not save our democracy

Nothing says no to democracy like people in positions of power using their influence to brainwash the public. In her comments Pelosi did exactly that: they dishonor, they degrade, they denigrate, they undermine.

The offensive word is “they.”

Meanwhile her party claims to be saving democracy for the people while it steers us towards socialism. Direct doles to taxpayers like Rep. Rashida Tlaib’s (MI-13) antipoverty BOOST Act completely ignore the amazing 3.7% unemployment rate:

Enough of throwing our tax dollars at wealthy people and corporations under the false guise of job creation,” [Rep. Rashia] Tlaib continued. “Enough of the tax scams like the GOP Tax Scams that have led to lining the pockets of CEOs and shareholders.2

Taking away and redistributing because you have the political might to do it isn’t democracy. It’s bribing the people to buy into Democratic socialist authoritarianism where how we live and what we think are controlled by the few at the top.

Do you want the four extremist Democrats who make up the House Squad to chart the course for the rest of your life?

Pelosi is a relic. She won’t save anything

House Speaker Pelosi is a congressional relic struggling to maintain control while an assortment of socialist empty heads and big mouths dominate her party helped along by special interests like the Justice Democrats PAC. She may prevail for many months, but sooner or later it’s going to be over. We should be very worried about who and what comes next.

No matter what you hear there is no plan for saving democracy as most Americans know it. It will only be saved for democracy as Democrats know it.

Saving our Democracy is for Democrats only

Democratic Party democracy means putting Democrats in office no matter what it takes so they can rule unconditionally. That means changing a system that has worked for a very long time.

Pelosi claimed the Trump administration dishonors the Constitution. After her party lost its sure win in 2016 Democrats attacked the Electoral College and backed a Constitutional Amendment to get rid it.

Losing an election is not a good reason to throw out parts of the Constitution that Pelosi and her party hold so valuable. Nevertheless, when Rep. Steve Cohen (D-TN) introduced bills to get the amendment process rolling he referred to the Electoral College’s “distorting effect.”3

H.J.Res.7: the fix for Democratic failure?

Anna Eshoo (D-CA) is one of only nine cosponsors to H.J.Res.7, Cohen’s preemptory fix for Democratic Party losses. Five are from California.

Eshoo talked about this constitutional anachronism:

It’s time to move on from our archaic system and embrace the will of the people in our presidential elections.4

We’re also waiting for Democrats to fix this outdated system as it pertains to birthright citizenship. H.J.Res.7 cosponsor Zoe Lofgren (D-CA) doesn’t like that idea because in this case archaic is a good thing. She goes back to the early 1800s for support:

The question that we are asked to consider is whether birthright citizenship is the right policy for America. I think the answer is clearly yes, and that in fact no other policy would be worthy of this country.

“The origins of birthright citizenship long pre-date the Fourteenth Amendment. Supreme Court Justice Joseph Story said early on that “[n]othing is better settled at common law than the doctrine” of jus soli, or citizenship by place of birth.5

Save democracy for Democrats only

Pelosi claims that America is “our people.” That means everyone but the Americans who inspired this ridiculous yet dangerous Save Our Democracy for Democrats movement by voting for a Republican president.

Democrats call us Trump’s base. Hillary Clinton called us deplorables. The rest of America calls us Republicans.

The rallying cry to save our democracy is so transparent that most Americans can see straight through it if they want to. The question is how many want to and how many prefer to believe the Democratic Party version of the truth?

Russia intervened and the Democratic candidate got more votes?

Did Russia undermine faith in American democracy as Congresswoman Lofgren claims,6 or did Democrats do the dirty work all by themselves?

The Russian conspiracy at the highest levels of our government grows every time Democrats retell it. If Russia did any real damage the only ones who can see it are those still expecting to see Hillary Clinton step out of the Oval Office.

The excuse for tossing out the Electoral College is that she won the popular vote. Does Russia factor into that win, as well?

Unlike the scare story of Russian interference we can easily see the damage done by Democrats every day because they do the same thing they accuse Russia of. They manipulate public opinion with words like these:

Why is America’s leader and his team so close to Russia? This is either due to poor judgement or a deeper personal, financial, or political link between President Trump and Russia. It is not normal for the leader of our country to be so extensively tied to a foreign government that has sought to undermine democracies across the globe, and connections like these should be concerning to American citizens everywhere.7

So Trump might have made an error in judgment or it might be something sinister. That’s not much of an argument or a case, but Rep. Eric Swalwell (D-CA) does his best to sound convincing. In his state it doesn’t take much to sway the masses to the left because so many are already there.

Democracy reformer John Sarbanes who claimed that “Republicans Are Rigging Democracy”8 made an even more nonsensical statement when he claimed that he was chairing:

A Bold Effort To Fix Our Democracy and Put the Public Interest Ahead of Special Interests.9

Presumably those special interests don’t include groups like the Justice Democrats.

Sarbanes has pulled out the “special interests” jab before. It goes hand in hand with warnings about a wealthy American ruling class stealing control from the people and presidential candidate Elizabeth Warren’s attempt to hijack our political system with anti-Republican anti-corruption legislation.

Democrats will put government in hands we should fear

Whether she can gain enough support in her left-leaning party to make good on her words, Pelosi still makes a good show of backing American democracy:

Not that we place ourselves in the category of greatness of our Founders, but that we do see an urgency to the challenge of our democracy and what is happening in elections.10

When she speaks of the challenge of our democracy, the real challenge is holding on to it for Americans and keeping it out of the hands of the newcomers who will inevitably take over her party.

No matter what we hear about Trump’s deplorable base, we are not the people America should fear.

8. “Republicans Are Rigging Democracy. We Will Fix It, With or Without Them” Democracy Reform Task Force. December 11, 2018. https://democracyreform-sarbanes.house.gov/newsroom/editorials/republicans-are-rigging-democracy-we-will-fix-it-with-or-without-them, retrieved July 10, 2019.