Democrats wrapped up their April 2019 Issues Conference with effusive praise for their fight for the people:

This was the best, the most exciting because we really had an opportunity to reflect on the work that we’ve done in the first 100 days – which I daresay is more than was done in the last eight years for the American people…1

That’s a pretty big boast. Saying something is historic doesn’t make it so. Claiming that you did something won’t make it true.

Is there anything except anger behind their fight for the people? 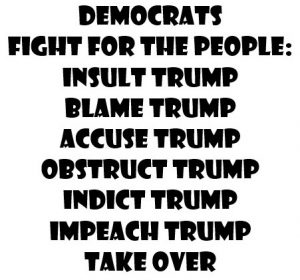 Progress in Democrats’ fight for the people?

We heard about “great progress” with H.R. 1, stamping out corruption, equal pay for women, and “measures to end gun violence.”2

Attendees didn’t mention the constant griping about the Senate’s legislative graveyard3 where House bills go to die thanks to Mitch McConnell.

Nancy Pelosi hit the nail smack on the head when she drew the Founding Fathers into the embarrassing liberalfest:

The Thomas Paine reference came from the American Revolution. Now we have another revolution on our hands that is driven by Dems anger issues.

After their Issues Conference party members affirmed that:

House Democrats are committed to fight For the People5

They are certainly committed to battle, but is this really a fight for the people?

If you want to get someone’s attention, scare them.

Environmental collapse is coming. It will take trillions to save us. Our democracy is corrupted beyond repair. A madman and a pack of liars are running the country. Hate is on the rise. No one is safe from being shot.

Scared yet? You are supposed to be. Scaring Americans stupid drives policy.

The truth is that the only catastrophe in our face right now is political catastrophe because of Dems anger issues. Fear is the new normal in Washington. Democratic fury is behind it manifesting as an unreasonable yet unstoppable hatred for our president.

Are you afraid of being shot?

Statistics tell the truth. Democrats don’t always do that.

Over 325 million people live in the United States. Your chances of being involved in a shooting are pretty slim unless you live in a violent hotbed like one of Democratic Chicago’s depressed urban neighborhoods.

When politics takes over the probability goes way up:

It has come to a point where the people of this nation, and citizens of the world, cannot attend church or safely worship at synagogues or mosques. Violence is so pervasive in our society and in the world community that it has broken through the consecration of the sanctuary and violated our most sacred spaces.6

That came from John Lewis after the Chabad of Poway shootings. One woman was killed. This was a terrible testament that proved again that hate lurks in our society. Does it mean violence is pervasive in America?

Your chances of dying in a tornado are still very, very slim. I’ve yet to hear of a bill to ban trailer homes.

Politics makes gun violence much more pervasive and threatening than the numbers.

That doesn’t mean gun violence isn’t endemic in our society. It doesn’t mean it’s not terrible or that mass shootings aren’t horrific. It does mean that we shouldn’t distort the probability of gun violence for political purposes and scare people away from their houses of worship when their lives are also at risk from any number of terrible behaviors, including drunken driving that killed 10,874 people in just one year.9

We shouldn’t create situations that could lead to violence, either.

a growing list of radicalized white supremacist neo-Nazi sympathizers who are all supporters of President Trump and view it as their mission to vindicate and defend his supremacy – even by means of mass violence and devastation.10

Mass violence and devastation are pretty scary, but remember that Waters also urged public confrontation against Trump administration officials. If a Republican lawmaker urged that kind of risky behavior Democrats would have immediately accused the GOP of inciting violence.

Instead, Dems fight for the people is about two things: getting rid of Trump and combatting Nazism which, given the twisted rhetoric behind their fight, are one and the same.

With a Republican in the White House it’s easy to spread fear about White Nationalism with blanket statements meant to scare rather than inform:

The deadly 2017 “Unite the Right” white nationalist rally in Charlottesville, Virginia served as a frightening reminder of the current threat white nationalism and hate groups pose to the nation.11

That came from the announcement for Jerrold Nadler’s Judiciary Committee Hearing on Hate Crimes & White Nationalism. The congressman set the stage a year before with a letter to government law enforcement agencies about hate and white supremacy. The congressman relied in part on popular media sources including Al Jazeera to back his obsessive condemnation of the president:

These concerning trends in law enforcement play out against the backdrop of President Trump’s rhetoric. He calls himself a nationalist.12

Nadler should drag out his dictionary and check the definition of “nationalist.” How can he uphold his oath to defend the Constitution if he finds that definition offensive?

Nationalist doesn’t mean Nazi. That’s a problem for Dems whose real fight for the people is turning Trump into a 21st Century Hitler. How do you make a white supremacist out of someone who is not? You keep repeating the same words over and over, a strategy attributed to Nazis.

The fight is in the words

Public officials should watch what they say because depending on who listens it’s easy to misconstrue what they mean.

We will assume he was not referring to the fear and hateful words spread by his own party and the risk it could pose for top Republican officials.

I know what Hoyer was trying to express so I’m not going to twist his words:

We must do more to prevent violence fueled by hate, particularly against the Jewish community in our country, which has seen a dangerous rise in anti-Semitism.14

If I was a Democratic and a Republican said this, I’d accuse him or her of ignoring all the other victims of mass shootings and gun violence, including Muslims and school children. That’s how you help make hatred and fear the new normal in our politics.

That’s not what Rep. Hoyer meant, though. He is absolutely correct. There is no place for anti-Semitism in our society even though Democrats defend it when allegations target a member of their party.

Those allegations were long forgotten when Kamala Harris was joined by left-of-center colleagues to discuss white supremacy and blast the president for not doing enough. She split hairs over how we classify who is responsible:

That’s an important distinction because different kinds of hate are valued differently in liberal America. This is why we don’t hear much about Antifa or other groups from Democrats.

In this climate even common sense efforts to enforce immigration law are a threat from a kind of nationalism most of us have never heard of:

Make no mistake, today’s immigration failure lays squarely at the feet of the ethno-nationalist wing of the Republican Party.16

While House Democrats continue to push each other towards an impeachment decision, they blasted the GOP for demanding action against Rep. Ilhan Omar and proved again that anti-Semitism is a partisan prerogative:

There is no place in our society for anti-Semitism. All forms of racism and discrimination must be condemned in the strongest possible terms. Representative Omar was correct to quickly apologize for her comments.

Laying hate at Trump and the GOP’s feet is what the Democratic Party’s fight for the people is really about. Their bills will go nowhere, but the fear and anger they spread has tremendous potential for a party that is very good at damning others while defending it’s own inflammatory words at any cost.

UPDATE May 5, 2019: angry Dems should label their news releases

Good governance and Washington are glaring oxymorons, but that didn’t stop a handful of Democrats from promoting local news and trust in journalism with H.Res.282.

Mark DeSaulnier (D-CA) introduced the resolution. He opined that:

At a time when fact and accountability are under constant attack by those at the highest levels of our government, it is incumbent on Congress to help preserve local news. Hedge funds are buying up papers with the sole goal of maximizing profits, causing the quality and quantity of content of local coverage to suffer. Failing to act would pose a real risk to our democracy,”18

Can we rely on Congress to hand us the facts so wealthy news outlets don’t mislead us?

There are so many emerging threats to our democracy that it’s difficult to keep track of which ones we should be most afraid of. Resolution supporter Zoe Lofgren (D-CA) talked about the Founding Fathers and a free press.19 Raskin talked about our:

We should assume that impeachment threats and denying the findings of the Mueller investigation don’t contribute to that division and stress.

In March 2019 DeSaulnier and three Democratic colleagues called for the protection of “high-quality, fact-based news.”21 This is a perplexing call to action considering that big media outlets often weigh to the left. If you don’t believe this is true, peruse their websites and read the headlines.

There is also a glaring hypocrisy at play here. Lawmakers are known for making outrageous remarks without the slightest reference to where their facts originate.

After the release of another very positive jobs report that dropped unemployment to 3.6% Nancy Pelosi complained:

Unfortunately, the evidence shows that most of the economic gains continue to benefit those already well-off.22

She never said what her evidence was and instead launched into a tirade about GOP efforts to undermine health care. This is the quality of information we often get from members of Congress. It’s not news. It’s not facts. It’s just angry political rhetoric.

To protect the unsuspecting, Democrats should label their press releases so we know which ones we can trust and which are a product of their anger issues.

After the house passed DOA in the Senate H.R. 1, Rep. Ilhan Omar informed the public that:

The bill hasn’t been signed into law so it’s not ending anything, but more important does “wealthy tax cheats and corporate lawbreakers” sound like news we can trust, or just more angry Democratic Party bombast?

You will have to judge that for yourself. Politicians like to keep us guessing.

10. “Rep. Waters Statement on the Release of a White Nationalist Who Plotted to Kill Election Officials.” Maxine Waters. April 26, 2019. https://waters.house.gov/media-center/press-releases/rep-waters-statement-release-white-nationalist-who-plotted-kill-elected, retrieved May 2, 2019.

11. “Chairman Nadler Opening Statement for the Hearing on Hate Crimes and the Rise of White Nationalism.” U.S. House Committee on the Judiciary. April 9, 2019. https://judiciary.house.gov/news/press-releases/chairman-nadler-opening-statement-hearing-hate-crimes-and-rise-white-nationalism, retrieved May 1, 2019.