House Republicans introduced H.R. 4760 the day before the s*** storm erupted over Trump’s White House immigration meeting. The Securing America’s Future Act of 2018 offers three more years1 of deferred action without extending any protection to criminals and gang members. One day later, senators talking bipartisan agreement met with the president to fix a problem created not by American citizens, but by foreigners who Democrats are using to challenge the meaning of “national interest.”

Before we have an agreement, we need to define national interest.

There are enormous differences between H.R. 4760, the Dream Act, and the proposal announced yesterday by Senator Lindsey Graham, but the one that matters most is the same contentious issue we’ve been fighting over since the early Obama days: there is no entitlement to citizenship in H.R. 4760.

Legal status without citizenship is a big problem for at least one of the attendees at that Thursday meeting. Dick Durbin’s collusion with sometime Republican Graham makes his Dream Act seem reasonable and above board, but his legacy-seeking legislation is just a path to creating more Democrats2 and that means making them citizens, too.

That’s what his party wants and the Senate appears ready and willing to shut down the government if they don’t get it, which begs a question: whose national interest matters when the demands of fewer than 800,000 illegal residents can turn off the lights in Washington? 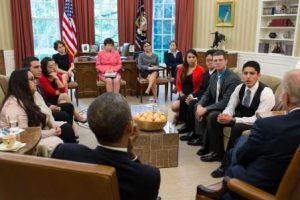 Bipartisan Senate agreement not what it seems

The day of the White House meeting Arizona Republican Senator Jeff Flake announced a bipartisan Senate agreement with Democrats four months in the making.3 The truth is that only six senators were involved in the bargain and one was Durbin, an unlikely figure for legitimate agreement with Republicans on the issue he made his own.

Flake is a vehement anti-Trumper. Graham comes and goes. The other bipartisan senators included Michael Bennett (D-CO), Cory Gardner (R-CO), and Bob Menendez (D-NJ), back in action after a mistrial in his corruption case.

That’s a small, unlikely bunch for true bipartisanship in only one congressional chamber. Having Graham and Flake in the mix doesn’t make this Senate agreement seem any less Democratic.

On January 17, 2018 Senator Lindsey Graham announced that four more Republicans had joined the cause to save DACA.4 The newest take on a bipartisan Senate agreement still includes a path to citizenship, albeit a long one that Democrats would likely try to modify later when the wait is deemed unfair. That’s a sticking point. It still doesn’t justify a shutdown.

This issue transcends political divisions, with members of both parties expressing sympathy for the Dreamers and support for a legislative solution. I am proud to join this growing bipartisan group of leaders in advancing this important effort that will fairly address the needs of the DACA population, strengthen border security, and help improve our immigration system.5

When Lisa Murkowski (R-AK) signed on was she aware that deferred action applied to individuals up to age 30 who have had up to a decade to do something about their status other than wait for Democrats to adjust it?

I am proud to be a part of this bipartisan solution for the Dreamers,” said Senator Murkowski. “We should not punish children for the actions of their parents.6

Only Republicans will compromise

Democrats haven’t changed their tune. The agreement has been veiled as salvation for the 780,000 who received DACA protection, but the newest agreement still offers a path to citizenship.

In the past Senator Bennett pushed for the “Economics Benefits of Immigration Reform,” arguing:

We have an incredible opportunity to bring 11 million individuals out of the shadows, secure our border, and unleash a torrent of economic activity in our economy.7

Will you take this opportunity to urge Congress to promptly pass the Dream Act?8

Not likely and with only two working days left to go DACA is starting to look like a long shot, too. Bob Menendez called the end of this temporary program a “national emergency,”9 which gives us a pretty good idea whose national interest Democrats want to seize.

Honesty and duplicity from the CHC

The chair of the Congressional Hispanic Caucus offered her take on any pending bipartisan agreement:

the Dreamer issue is a discrete, narrow matter and should be handled as such.10

Rep. Lujan Grisham (D-NM) is right. This is a narrow matter, so why would any member of Congress, especially a Republican, agree to set the national interest aside and shut down the government on behalf of a handful of people who don’t have any right to be here barring the passage of new legislation?

Give the Democratic Party credit for turning the plight of so few into a true national emergency. Will we survive a shutdown in the extremely unlikely event that there isn’t a stopgap measure in place by late Friday night? Of course, but that’s not the point. What matters is that a hopeful-sounding “bipartisan Senate agreement” helped bring us to where we are now.

Senate Democrats ready, willing, and able to shut down the Federal Government on behalf of a handful of illegal immigrants would do well to remember what Obama said while blaming Republicans for the 2013 shutdown:

That’s all this has become about. That seems to be the only thing that unites the Republican Party these days.11

The “all” in this case was GOP efforts to take down the Affordable Care Act. In 2018 the “all” is reinstating DACA protections that Obama designed to be temporary and don’t have enough support in Congress to be reinstated.

Both policies hurt us. Democrats want to ensure that the pain never goes away. In reality the people they will be hurting most are federal workers who won’t get paid, though we can rely on Congress to sweeten the deal for them when things get back to normal.

The rest of us will get by just fine.

It doesn’t matter what Democrats say, what Republicans say, or what Trump tweets. Washington kicked off our DREAMer shutdown at the stroke of midnight. Obama’s temporary order still haunts us and shows no signs of going away.

Where does the blame rest? When Democratic Caucus Chairman Joe Crowley blamed Republicans he placed “providing certainty for DREAMers” ahead of “funding our national priorities.”12

It’s not often that I agree with Crowley, but in this case he spoke the truth. This is a DREAMer shutdown. The national interest came second.

On Thursday we got a good look at what the president wants in an immigration deal. After all the talk of bipartisanship in the Senate we heard a hopeful note from Mitch McConnell that didn’t take into account just how unhappy Democrats will be with anything that restricts the flow of illegals across the border:

I am hopeful that as discussions continue in the Senate on the subject of immigration, Members on both sides of the aisle will look to this framework for guidance as they work towards an agreement.13

Dreamers should not be held hostage to President Trump’s crusade to tear families apart and waste billions of American tax dollars on an ineffective wall.14

Then he issued a false threat after blaming Trump for a crisis that Obama’s stopgap policy created:

Republicans have just fourteen days to work with Democrats to reach a bipartisan agreement to pass the Dream Act and solve the DACA crisis.15

Democrats have just fourteen days to decide who is more important, American citizens or illegal immigrants.

UPDATE February 12, 2018: fair Senate debate likely to be a circus

Is “fair debate” in search of a Senate agreement on DACA possible? Mitch McConnell made the announcement today that he was ready and willing and stipulated what would have to happen:

That means finding an agreement that can pass the Senate, pass the House, and which the president will sign — not just making a point.16

Those hurdles are pretty steep, especially the $25 billion the GOP Secure and Succeed Act allocates for a border wall. The giveaway to the left is that the bill doesn’t just cover DACA recipients, but extends protection to all who could be eligible. That’s raises the bar to 1.8 million, but can Democrats swallow not only spending money on a wall but placing limits on family chain migration just to put a few more illegals out of deportation’s way? No, they can’t. They will choke, but that doesn’t mean we won’t get a pretty good show before this GOP effort at a best case compromise goes down in flames.

Back to the drawing board, Senators. No worries. No one is surprised and Democrats wouldn’t have it any other way.

Correction: this post originally showed that Senator Murkowski represents Alabama (R-AL) instead of the state of Alaska (R-AK). We regret the error.