President Trump’s newly-announced plan to ban immigrants from receiving welfare for five years was an easy promise to make. Newly-arrived noncitizens don’t qualify for most federal benefits and they aren’t the ones who cause us the most grief when it comes to being dependent on the government. Dependence is an issue for Americans who don’t work, so why are we telling them that a welfare work requirement is cruel and unreasonable?

Foreign workers have their own work requirement

Coming to America takes effort. It’s an easy guess that immigrants who come here have something greater in mind than living off taxpayers. How many people make the journey to the Promised Land so they can do nothing? Some choose to be criminals and some come illegally, but if they are lazy there are cheaper places to be than the United States. 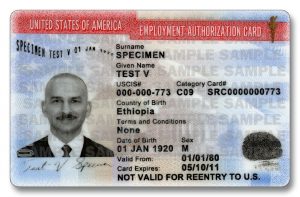 A May 2017 Bureau of Labor Statistics report shows that foreigners are at least as industrious as we are. Foreign workers have lower unemployment and higher workforce participation than people born in America. The difference overall isn’t large (65.2% for foreign-born vs. 62.3% for native-born), but 77.8% of foreign-born men work vs. only 67.5% of men born in the U.S.1 70.1% of foreign-born blacks are employed vs. 60.1% of native born.2

One of the grievances Democrats have with dumping Obama’s ill-fated Deferred Action for Parents of Americans and Lawful Permanent Residents (DAPA) program is that undocumented parents lose out on the chance for a work permit,3 something we already hand to recipients of DACA.

Work permits are a big deal for noncitizens. If we give them work permits they will work. Form I-765, Application for Employment Authorization, is their ticket to living in America.

We spend lots of money on workplace enforcement because of illegal foreign workers, so why are we telling people who were born in America and should have jobs that work is optional?

In 2012 the Obama White House tossed Bill Clinton’s welfare work requirement out the window despite a poll showing that 83% of Americans agree that a work requirement is a good idea.4 Republicans were incensed:

jobs are hard to come by. So the White House simply gutted the work requirements that have been so successful. Instead of creating new jobs, the Obama administration is creating more dependency.5

Now the work requirement is back in the headlines as Democrats struggle to maintain the remaining shreds of Obama’s legacy. The party seems blind to an enormous contradiction in their policies that rejects a work requirement for Americans yet endorses the right to work for foreign-born workers and guarantees wage protections for illegal residents.

Why is asking people to work for their money such a bad idea?

A work requirement for welfare is anathema to many Democrats. Reps. Frank Pallone Jr. (D-NJ) and Ron Wyden (D-OR) blasted a work requirement as one of the “misguided and harmful ideological policies” being considered for Medicaid while they endorse what sounds like a bald-faced health care giveaway:

Medicaid waiver proposals must be judged on the Centers for Medicare & Medicaid Services’ stated principles: whether they strengthen coverage, expand access to providers, improve health outcomes, and increase the efficiency and the quality of care for individuals.6

We all want these things from health care. They aren’t free. Someone has to pay, but Democrats are still indulging low income Americans with the argument that they shouldn’t have to work for what they need to survive.

Instead of asking them to take jobs, should we just give them more money?

For some, banning a work requirement isn’t enough. In lieu of federal employment assistance one Florida representative and 44 cosponsors suggested that we waive work and raise food stamp benefits. Congresswoman Alma Adams’ Closing the Meal Gap Act would:

Allow Able-Bodied Adults to be exempt from SNAP work requirements if their state cannot provide them with a slot in a SNAP Employment and Training Program (also known as SNAP E&T).7

It would also raise the minimum food stamp benefit by more than 50%.8 What does all this mean? Welfare recipients will continue to depend on the government for food and jobs. If the government won’t hand them job training and employment, they get more money and don’t have to spend their time working.

Are the undocumented getting a bad rap?

There are plenty of low income people who don’t depend on the government for welfare or for jobs. Some are citizens. Some are undocumented immigrants who don’t qualify for welfare benefits and will do anything to stay here and work, something we routinely admit to when we talk about these people taking jobs Americans don’t want.

So here’s another question Democrats will never be able to answer:

Why do we tell foreign-born residents that the right to work in the U.S. is the Holy Grail while we continually come up with reasons for Americans to depend on the government for support?