When it comes to political predicaments it’s hard to top having to please everyone on immigration. The obvious solution is to do nothing. That hasn’t worked so well and is a damned no matter what you do scenario. Short of deporting every last illegal by the end of January, Trump will have a hard time pleasing hard liners. Even taking the middle road won’t be good enough for the amnesty crowd.

What’s a president to do?

It’s really very easy. Everyone has to eat. No jobs and no food means fewer illegals to deport.

Trump has already taken the first step. He got the word out. 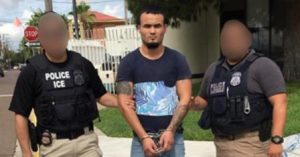 Deport the bad guys.
The rest? No jobs.
Courtesy of ICE

We’ve been really careless and stupid about our conflicted, carrot and stick fix for our illegal problem. The U.S. claims it doesn’t want them here, but we let cities announce that they are safe zones. We tell employers not to hire illegals but the Labor Department not only offers, but guarantees them the minimum wage. Policymakers shake their heads over what to do as the numbers swell but we refuse to allow schools to verify whether their students are legitimate U.S. residents.

Are we stupid, too generous, or is this problem just too big to cope with?

I’m opting for stupid and too generous, though to be fair this is a liberal Democratic problem conservatives have been saddled with. Now the ball is in our court.

It’s hard to live in a place where you can’t work. If the folks back home are expecting you to be sending them a little extra from your paycheck that’s not going to happen when you don’t get paid.

It’s going to be hard to put food on the table, too.

We insist on believing the left wing myth that these people only take jobs waiting tables, washing dishes, and cleaning up hotel rooms, things that no American would ever do. The blatant racism behind this false liberal truism aside, demands to pay a $15.00/hr. minimum wage argue that we can pay citizens higher wages for doing the same thing we pay illegals to do.

We need to have a little more faith in free market capitalism. Economic holes will be filled. The government-sanctioned black market in illegal labor will be replaced with something else. Unless employers are breaking the law and paying substandard wages, little will change and they just might find better ways to get things done.

We have heard about President Trump backing down on immigration policy. My suspicion is that if there is any backing down to do it will come from Republicans turning tail and fleeing from enforcement because of midterms.

For his part, the president-elect’s plan includes halting sanctuary city funding, revoking Obama’s orders, and a vow to do the most important thing of all:

Turn off the Jobs and Benefits Magnet.1

The battle lines are being drawn now but this can all be done quietly. Think of it as a take on what Romney called self-deporting. No jobs, no food means no illegals to kick out. That approach not only saves more taxpayer dollars on enforcement, it repeals the foolishly duplicitous policy of telling employers not to hire illegals while our government guarantees them the same protections citizens receive.