It’s absolutely stunning to imagine after the GOP loss of the House that even a single Republican Senator could follow defeat with a refusal to agree with the president on something as basic as preserving our national sovereignty. On Thursday twelve GOP members of the Senate did exactly that when they sided with Democrats across the aisle and in the House to pass the Joaquin Castro (D-TX) resolution to quash Trump’s emergency declaration.

Not a single Senate Democrat voted against the measure to overrule the president.

In triumphantly divisive remarks after the Senate defeated Trump’s effort to protect the sovereignty of our border, Castro insulted the Republican Senators who did the right thing and stood by the White House instead of his H.J.Res. 46:

Unfortunately, in Texas that did not include either of our senators, Senators Cornyn or Cruz, who showed weakness today, who showed timidity, who betrayed the people of Texas in favor of Donald Trump.1

That is the rhetoric that 12 of our Republican Senators support.

Castro spoke of Trump “fearmongering – scapegoating immigrants.”2 He had already charged the president with circumventing Congress in a February 26, 2019 press release3 despite his support of Barack Obama’s deferred action order overreach.4

I voted with President Trump and rejected Nancy Pelosi’s motion of disapproval regarding the emergency declaration to build a barrier on the southern border.5

Twelve Republican Senators refused. Instead, they swallowed the Democratic Kool-Aid. Perhaps they weren’t paying attention when Castro backed the newest Democratic attempt at amnesty, the Dream and Promise Act, just two days prior to their betrayal. 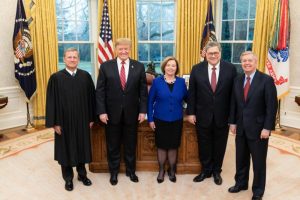 Schumer sums up what 12 Republican Senators voted for

It is no surprise that the president holds the rule of law and our Constitution in minimal regard.6

As Schumer confirmed, this vote was about much more than building a wall. It was about denying executive power to a president to secure our nation’s sovereignty and protect our southern border.

The GOP betrayal vote also placed a Republican president in jeopardy with a defeat Democrats will use over and over as the 2020 election season heats up.

Special spots on the conservative wall of shame

If we lose the White House to a Democrat next year we have twelve turncoats we can thank for their contribution. Some of the names are too familiar: Romney, Murkowski, Collins, but they all deserve a special place on the conservative wall of shame.

This is what they voted for when they supported Castro’s H.J.Res. 46:

This joint resolution terminates the national emergency related to the U.S.-Mexico border, declared by the President on February 15, 2019.

In the eyes of the nation they agreed to:

The fact that a Republican controlled Senate can pass a measure denouncing the President’s egregious use of emergency declaration powers indicates something larger – the President has exceeded his constitutional authority and must be reined in.7

This is who they are, in Democratic blue:

Helping Democrats hand a historic Constitutional defeat to the president is something that requires a little explanation.

Mitt Romney justified his nay vote with this:

I am seriously concerned that overreach by the Executive Branch is an invitation to further expansion and abuse by future presidents. We experienced a similar erosion of congressional authority with President Obama’s unilateral immigration orders – which I strenuously opposed.8

Strenuous opposition or not, Obama got away with what he did. We’re still battling the consequences of Republicans’ inability to shut down his DACA order like they shut down Trump’s declaration.

Democrats understand tit for tat politics. Is this too lowbrow a concept for Republicans to understand?

Marco Rubio ignored another national crisis, U.S. debt and spending, with a clever explanation for his no vote. He wants to spend a lot more money.

The Florida senator’s Additional Supplemental Appropriations for Border Security and Disaster Relief Act of 2019 is a lot less about the border and a lot more about other things. The proposal’s $18.549 billion in outlays includes nearly $15 billion for:

$3.6 billion goes to cameras, sensors, and the like “to address the emergency at the border.”10

Rubio doesn’t mention a border wall. Those must be some mighty powerful cameras.

A week after a handful of grandstanding Republicans in the Senate pontificated about the Constitution and presidential powers to justify joining Democrats to block Trump’s border crisis funding, CBP agents nabbed more than four hundred illegals in just five minutes.11

The 400 apprehensions weren’t spread out. They weren’t a daily total for the Southern Border. They happened in El Paso, next to a high school. The agency revealed in a March 19, 2019 press release that over the past thirty days it has grabbed an average of 570 illegal immigrants per day in this area alone.

In the extremely unlikely event that Senator Rubio gets his hurricane relief and border camera funding approved, we can take pictures Congressional Democrats, RINOs, and the media will use to show how cruel and unfair the U.S. is to our new citizens.

That’s how politics protects our sovereignty.