The RNC showed up in my mailbox with its hand out. The solicitation for political donations to the Republican Party came disguised as a survey with a vaguely threatening “FINAL NOTICE” at the top of the page.

In between were a lot of questions that solidified my decision that donating to the party is a waste of money.

The mailer included a cover letter from Republican National Committee Chairwoman Ronna McDaniel. She emphasized that the RNC needs to get moving NOW [her emphasis, not mine].

It’s a little late for that, Ms. McDaniel. Instead of coming to me, ask congressional Republicans who are too conflicted about their conservative principles to stand firm and push the agenda the RNC wants me to pay for.

When Senate Republicans can agree to vote for a Supreme Court justice nominated by a Republican president, then we can talk cash. Until then my political donation is a waste of money better used for my skyrocketing Obamacare insurance premiums. 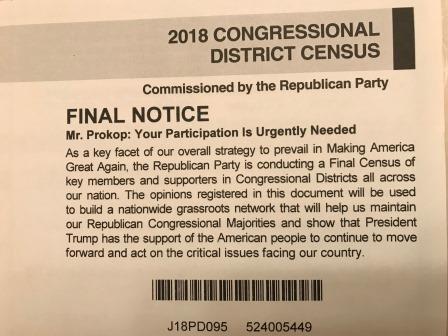 Final Notice a threat?
No, just the RNC looking for cash

Melania asking for political donations too?

Next up was a letter from Melania Trump and a “Presidential Pledge of Support” ready for my signature. The pledge included an opportunity to donate $5,000 or more to the same worthy cause as the first letter.

Both mailers had far too many words that never answered this simple question:

Why would anyone consider making political donations to a party that doesn’t know what it supports or who it stands behind?

I don’t like getting a final notice for anything. When it arrives with its hand out I like it even less, especially when it asks aggravating questions about positions on issues the GOP fails to live up to.

This appeal for cash was masked as a Congressional District Census survey. The questions included hot buttons a Republican Party focused on political donations should leave unasked.
For example, if I was looking for a handout from conservative voters I would be embarrassed to bring up the border wall and sanctuary city funding.

The money is still flowing to illegal immigrant sanctuaries.

We’re still waiting for the promised wall that helped get our votes.

Fortunately for the RNC there is no shame in politics. Here is a smattering of the questions that preceded the credit card form.

Do you think Congress is committed to passing the president’s agenda?

Does it matter what the president’s agenda is? Republicans won’t stand up to Democrats and push it through and can’t even agree among themselves if they will support it. What Trump wants is going to matter even less as midterm races heat up and frightened GOP candidates try to separate themselves from what they regard as a conservative liability.

Do I believe my state representatives support Trump’s agenda?

I’m from Illinois. Think Durbin, Duckworth, Schakowsky, Gutierrez. Even our Republican governor put pen to paper with a sanctuary bill. Looking for conservative representation in Illinois is pointless.

Do I support the Republican tax plan?

Finally. A lonely victory and one of the only issues worthy of a contribution. Nice job, but it’s not enough.

Do I believe the federal bureaucracy acts in our best interest?

Trick question. A bureaucracy acts to support itself.

This is the real question: do Republicans in Congress do everything possible to make sure the government acts in our best interest?

Here is one more: how much has the GOP cut spending and waste for Washington’s administrative monstrosity?

How to turn supporters into people who don’t vote

Does the media have a strong bias towards the president and Republicans?

Of course it does. The president doesn’t help himself. Who told Trump that mocking Kavanaugh’s chief accuser in Mississippi on Tuesday was a good idea?

I’m pretty hard to offend. I was appalled and I’ll wager a bet that his performance is enough to turn fence sitters into non-voters or worse, new Democrats.

Year after year we hear that Democrats own the airwaves. Year after year Republicans suffer bad press and blame the media. For the time being it might help if we put a filter and fact checker on some of what comes out of the White House. It might help even more if Republicans could agree on a message people know they will stand behind.

Has political correctness gotten out of hand?

Yes. Republicans helped. Consider the rhetoric on immigration. What makes GOP leaders think that using worn out Democrat buzzwords for amnesty like “nation of immigrants” and “broken” while they back a DACA bailout will help make their case?

How do you make the case for more, not less correctness? What happened in Mississippi is a good start.

It will turn into a sop to Democrats, labor unions, and corruption. Let’s make a simple gesture to conservatives and taxpayers by repealing Davis Bacon first. If the GOP can stand up to Democrats and get that done then we can talk about infrastructure spending.

We already have that. All you need is the skill to cross the border.

I don’t ever want to hear a Republican use those two words in the same sentence again. The failure of GOP health care reform is a historic failure and a disgrace.

Can you lead a Republican to guns?

Apparently leading Republicans to water isn’t enough. You have to make sure they drink. A flagrantly leading question asked whether laws impeding our rights were a good way to deal with gun violence.

When it was all over there was an offer to pay $15 to process my answers, just in case I couldn’t fork over something larger.

How stupid does the RNC think I am?

Melania: join my husband with a pledge of support

At least Mrs. Trump’s RNC letter was short and to the point. There were no questions. It asked for a Presidential Pledge of Support and a political donation so the Republican National Committee can “forcefully fight back against Donald’s most ardent opponents … “

Is she referring to Republicans or Democrats?

If the Republican Party wants political donations, ask me again when you live up to your name.

One more thing: if you want someone to return your survey put a stamp on the envelope. You can take it out of my $15 processing fee. This is the 21st Century. A lot of us don’t use stamps. I’m not wasting gas on a drive to the post office to mail you a check you don’t deserve.