The Republican National Committee came knocking again. The envelope was personally addressed. “Trump Pence Victory” was emblazoned on the contents. So was the request for a handout of $100, $150, $200 or more. If you were generous and hungry an invitation from the president was enclosed to a special dinner in Milwaukee with other loyal Republicans for only $2,700 per couple.

It didn’t seem like a lot for a chance to put America First until I considered the source. 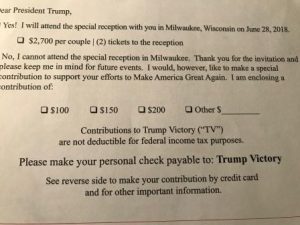 The acronym on the mailer for Trump Victory is “TV,” which is also one of the elements of the party’s undoing. The president and the media have been at war from day one and from all appearances the media is winning.

Apparently no one at the RNC noticed the double entendre when the final proof went to the printer.

Democrats would have caught it right away. They never miss a trick.

Republicans have some explaining to do. Party members are behaving badly.

It only takes a few rotten apples to spoil the party. One of those is a senator who quit.

Jeff Flake (R-AZ) recently joined Democrats and members of his party to slam the Trump administration for trying to limit an invasion of migrants Congress is afraid to control. Republican Party members colluded to help force the president’s hand on how families are processed. Then the party went belly up on their own immigration solution.

Turning on the administration must seem like a no-brainer for lawmakers running for reelection who want to look better to voters by midterms and need an easy excuse to separate themselves from the president. Children are a great excuse. They always draw unquestioned sympathy. Like controlling illegal drugs, lawmakers are terrified to say no.

Flake has the best excuse of all. He quit, so he can say whatever he wants. The senator fell back on the media to support his views when he joined Maine’s Susan Collins to write a letter to the secretaries of Homeland Security and Health and Human Services:

Despite [DHS] Secretary Nielsen’s testimony, a number of media outlets have reported instances where parents and children seeking asylum at a port of entry have been separated.1

So the message is put your trust in the media, not Trump administration officials. Flake and Collins cited a Washington Post article and concluded:

It is critical that Congress fully understands how our nation’s laws are being implemented on the ground, especially when the well-being of young children is at stake.2

There isn’t much to mistake about how our laws are enforced. If our laws were worth the paper they are printed on we wouldn’t have the problem Flake, Collins, and other Republicans are using against this president. We’ve see more than our share of manipulative pictures courtesy of national news outlets. These pictures and the reporting that accompanied them are now the truth and help ensure that our Southwest border is as leaky as an old, rusty bucket.

At least we can’t accuse Flake of ingratiating himself with voters.

It’s obvious the problem is not going to go away and certainly not in time for November. If we get bored talking about it there are others ready and waiting

Republicans forgot all about an America First policy when threatened with tariffs and a trade war. They fled from the right en masse and sent a letter to President Trump:

Too bad we’re at the mercy of our trading partners. Some of us thought we were an economic superpower. It turns out that many Republicans believe we are just a nation that has to put up and shut up so we can thrive without offending.

That mentality infects a lot of policymaking that puts us anywhere but first. USAID comes to mind, but just try trimming the foreign handouts down to size and watch what happens.

A trip to the hospital with the Republican Party

You can’t put America First if everyone is sick because going to the doctor is too expensive. Small businesses that can’t afford to provide health care can’t compete and that’s not good for the economy. Neither is spending countless billions on a law that everyone seems to agree isn’t working.

The colossal GOP failure to fix the flaws of Obamacare was swept under the rug by other issues like the failure to fix immigration. The costs are still with us. The price tag harms the very same small businesses Republicans use to criticize the America First policy on tariffs.

We recently got an updated look at what we shell out for health subsidies:

In 2018, net subsidies for noninstitutionalized people under age 65 will total $685 billion, the Congressional Budget Office and the staff of the Joint Committee on Taxation (JCT) estimate.4

another punch in the gut for Americans already struggling in the president’s [Barack Obama] economy.5

Republicans didn’t fix the problem. They arguably made it worse by repealing the individual mandate and shifting more costs onto those who pay for insurance.

When fixes were proposed many cried foul, including Alabama Republican Mo Brooks:

I will vote against the American Health Care Act because it has more bad policy than any bill I have ever faced. I simply cannot, and will not, vote for bad legislation that hurts so many Americans solely because Washington friends and colleagues ask me to.6

Brooks was right. This was a bad bill. So were other GOP last-ditch proposals, but the real lesson is not about faulty legislation. It’s about the failure of party vision.

On the heels of that May 2018 Congressional Budget Office report on health care costs Speaker Ryan spoke of action to extend more credit to small businesses:

the Small Business 7(a) Lending Oversight Reform Act of 2018 strengthens the Small Business Administration’s (SBA) Office of Credit Risk Management. Recently, there has been an uptick in the popularity of these particular loans, so this bill ensures the program is run efficiently and effectively.7

Loans are about debt. Cutting costs is about profit and:

It’s estimated that Obamacare’s costs and mandates have resulted in roughly $19 billion in lost wages for small business employees.8

Health care must have been exempted.

North Korea win or no win?

After the North Korea summit we heard this from a Republican:

While I am glad the president and Kim Jong Un were able to meet, it is difficult to determine what of concrete nature has occurred,” said [Senator Bob] Corker.9

Republicans need a win everyone can buy into and this was it, but with war games threatened we heard some tepid praise from a Republican on the House Armed Services Committee:

Illinois Republican Rodney Davis even managed to work in some praise for Barack Obama by comparing the summit to improving relations with Cuba.

That’s not to say that the party wasn’t supportive or that a single talk with the North Korean dictator means anything, but how many of us don’t remember that historic Nixon visit to China despite the equally historic failure of his presidency?

This is an accomplishment decades in the making even if it doesn’t go anywhere. We’ve never come this close. Republicans should be shouting accolades to the skies instead of worrying about the fallout if the hopes are never realized.

We can always find another ocean to hold our war games.

Still nothing on GDPR

The European Union went after American icons Facebook and Google as soon as the new GDPR regulation went into effect. We haven’t heard much, if anything from Congress except for some veiled praise for the EU after it regulated U.S. businesses and a suggestion that we should pass the same kind of legislation here.

The U.S. government extended an olive branch to companies struggling and spending millions to comply. Instead of fighting back we are “Joining the EU-U.S. Privacy Shield.”11

You probably noticed but I’ll point it out anyway. The EU came first. That’s fair. We’re the ones being regulated by their law.

Republicans have nothing to say?

The RNC mailer also talked about fake news and propaganda. Believe it: fake news is winning the day. It’s just not winning it for Republicans. It sells a lot better than the paltry list of accomplishments that merit a $2,700 dinner: one (1) Supreme Court Justice, unnamed job-killing regulations, fighting terrorism, and eliminating unnamed trade deals.

Democrats adopt the most ludicrous, damaging positions imaginable and get away with it more often than not because they don’t care what they have to say to sell or, in the case of Donald Trump, to condemn.

America First is like Great Again. The Republican Party has absolutely no idea how to work together, much less work with this president to deliver it.

Until we hear a plan that might work I’ll have dinner alone, thanks.

Republicans failed again. There was no rubber stamp on a House legislative solution to Capitol Hill’s politically contrived immigration crisis.

When the week was over the GOP blew it and fake news won the day in the guise of a crying child, an image of our president, and a sea of red.

There is more honesty behind Time’s phony, no holds barred “Welcome to America” cover than we’ll ever get from the Republican Party because it shows just how far the media is willing to go in the pursuit of self-ingratiating, flagrant anti-Americanism.

It’s not the picture of Trump that offends. It’s the caption that goes with it.

If the GOP would stand up for what it claims to believe in like Time stands by its cover the RNC might be worth a $5 or $10 donation.

The pressure is on but fortunately for conservatives worried about a Republican sellout the party’s famous inability to agree on legislation saved us from a permissive, Democratic Party-inspired immigration bill cloaked in the reassuring shroud of GOP approval.

This is just another example of the old maxim about quacking like a duck. Republicans know when they are doing something wrong. They knew their immigration fix was something voters wouldn’t like but they don’t have the spine to group together and tell the country why they aren’t going to do what the left wants them to do.

For most conservatives that’s not a problem. We’ll take refusal any way we can get it.

UPDATE October 20, 2018: no more freedom to be a sovereign nation

Another Latin American caravan is headed our way. Democrats say we don’t have a choice. Trump says he’ll stop these people at the border, but that’s not what happened last summer when dividing illegal immigrants from the children they brought with them was a show-stopper for Republicans and the White House.

There is more to the loss of our sovereignty than immigration. We buckled to Europe’s new Internet privacy regulations and followed up by allowing our web providers to be subjected to a 60-second takedown rule for content judged too extreme. The EU’s extension of control over the World Wide Web is something we should have said no too immediately. It puts U.S. companies at risk. Democrats followed along, which makes sense given their pre-midterm endorsement of socialist policies. Republicans don’t have an excuse. They must assume this is an issue too esoteric for the masses to comprehend.

America first? Not before midterms.

The GOP claims to put America first. Does it have the spine to stand by those words? The timing of the newest onslaught of foreign nationals is curious given that midterms are only a few weeks away. The party needs to get in front of this issue now and not stand meekly by and let Democrats pound our sovereignty into submission.

I’m guessing that’s exactly what will happen. Trump doesn’t have to worry about reelection just yet, so the time for an Oval Office order is now.