Sponsor Adriano Espaillat (D-NY) calls it the No Federal Funding for Confederate Symbols Act. H.R. 3660 would more appropriately be titled the Monuments to Slavery Bill.

Before he introduced the new legislation to the House on August 18, 2017 Rep. Espaillat joined Congressman Dwight Evans to announce the purpose:

Federal Funds Should Not Support Monuments to Slavery or White Supremacy.1

They laid out our task:

If we want our nation to heal and move forward, we must remove these abhorrent symbols at once,” said Rep. Dwight Evans (PA-02).2

45 Democrats cosponsored the bill. In the likely event that it will go nowhere, what will it accomplish? It gives the party hard numbers and a goal. 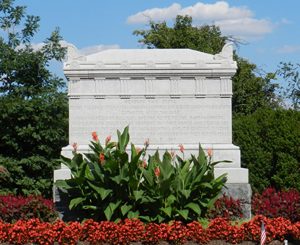 This is how many Monuments to Slavery

H.R. 3660 gets right to the point. The No Federal Funding for Confederate Symbols Act dishes up the numbers America needs to get started eliminating monuments to slavery that include flags, statues, and of course Confederate monuments.

The numbers are intimidating:

1,503 symbols of the Confederacy in public spaces, including 109 public schools named after prominent Confederates …3

There are also 10 U.S. military sites named after prominent Confederate commanders that will require “redesignation.”5

Defund Confederate symbols to what end?

H.R. 3660’s solution to our Confederate symbol problem is a simple one: don’t pay for them. The act calls for us to eliminate Federal funding for “the creation, maintenance, or display”6 of these relics on Federal public land. There is no explicit language to remove Espaillat’s monuments to slavery, though it stands to reason that if we can’t use money to maintain or display them they will have to go.

How do we move racial tensions forward?

In the press release announcing H.R. 3660 Congressman Evans talks of healing and moving forward. What does he mean? The details on that are a little hazy. You won’t find them in the bill. Inflaming racial tensions is one of the things the Democratic Party does when times are tough. This has been a fallback for too many years to simply call the task of repairing American race relations finished after we dispense with all visible signs that the Confederacy existed.

There will always be a never ending amount of healing to be done. Democrats will lay claim to every last bit of it.