The destruction of two Trump Business Advisory Councils* because members took offense after Charlottesville isn’t much of a tragedy. Corporate America is more than a little guilty of hypocrisy when it beats us over the head with its dedication to diversity, fairness, and tolerance. You usually don’t have to go out of your way to convince people what you really are. The problem comes when you try to convince people you are what you aren’t. That’s what we do when we decide to erase history because the insanity of alt left politics requires that we deny America’s past.

There is a ridiculous rumor going around that there is no such thing as the alt left, which is a lot like pornography. It’s hard to define but you know it when you see it, hear it, or watch it. No matter the issue the argument is always the same: we aren’t as good as we should be and it will take a lot of money, a new set of values, and far left politicians to fix us.

Paranoid ramblings from Washington are dangerous when they urge the nation to conduct a witch hunt to root out ideas, values, and views the left doesn’t agree with. Washington Rep. Pramila Jayapal urged us to get an ideological search and destroy underway:

White supremacy must be uprooted from our society, but the president has elevated white nationalists to the highest posts of government. It’s time to get these people out of the White House.1

Joe McCarthy would have been both honored and appalled. After we out the bad guys and banish them from Washington who do we put in their place? How about the same people who think it’s possible to erase history and recreate where we came from by simply taking down a few statues and monuments? 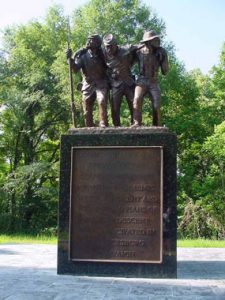 Erase history to make us something we aren’t

Alt left hysteria over historic proof of the confederacy is steaming through liberal America to no good end. We can’t erase history. We can reinterpret it, change its course, and even atone for bad deeds but we can’t wipe out what came before us.

You don’t honor something by admitting that it happened and you don’t get rid of it by denying its existence. North Carolina Congresswoman Alma Adams skewed the dialogue and suggested exactly that when she called for a confederate monument takedown:

The fathers of the confederacy waged war against their own country and they fought and died in a rebellion who’s central aim was to protect and defend the enslavement of human beings. That is not a legacy that we should champion or honor.2

When we erase history and wipe out that legacy we have to draw a line somewhere. Do we erase any reference to slavery because the fact that it existed on American soil is so overwhelmingly offensive?

The two Union soldiers in the picture are African American. The other man is a southern field hand.3 The symbolism is not subtle, but it is little different from how contemporary liberals frame their efforts to raise up poor, minority communities that have been enslaved by Democratic paternalism.

Are we a nation of confederate sinners?

Speaking of “our nation’s original sin,” Debbie Wasserman Schultz (D-FL) called for a special session of her state’s legislature to get rid of an offending statue of a confederate general in Washington:

It’s time to stop playing games. No family visiting our nation’s Capitol should have to explain to their child that the statue representing our state honors someone who fought for a philosophy built on hatred and oppression.4

That is exactly what should be explained to children with the exception of one word: honors. That word comes from leftist intolerance, not historical fact. The alt left’s full court press to widen the divisions created by their last president seeks to wipe out the vestiges of where we came from instead of teaching the lesson that people and their values can change, including the life of a confederate general after the Civil War.

You can’t reflect on something that’s been destroyed. Germany has holocaust memorials and concentration camps preserved for all to remember. Japan has its war memorials. Surely America has the courage to look back at the times in our history when our values were different and find solace because we embraced change and made our country better.

The difficulty comes from setting your sights on making America worse. That includes damning us for our past and requiring Americans to be racist, xenophobic, and bigoted to advance alt left political goals that have turned to erasing traces of our past that contemporary values cannot honor.

Americans accept our past, present, and future. We acknowledge that the path to understanding who we are is knowing where we came from. When we erase history to inflict politically-motivated shame on the nation we are in denial. Denial only causes more pain. It makes the bad things worse. Creating American badness to force change is what the alt left is all about.

*UPDATE August 18, 2017: make that three. The plan for an infrastructure council was tossed yesterday.

The effort to cleanse our history continued on Friday. Congressman Anthony Brown (D-MD) introduced a bill that gives us 90 days to take down a statue of Robert E. Lee at the Antietam National Battlefield. His “Robert E. Lee Statue Removal Act” trades our national memory of a site where many thousands died for present day liberal speak:

Public land should not be home to symbols of hate and bigotry that memorialize leaders of the pro-slavery, traitorous Confederate South,” said Congressman Brown.5

Perhaps the congressman didn’t notice the hypocrisy in his September 15, 2017 press release announcing this handout to the alt left:

It [Lee statue] was erected for aggressively political and polemical reasons on what was once private land but has since become public land.6

His bill proposes that we take down a statue for flagrantly partisan political reasons backed by a polemical rant about a part of our history that we shouldn’t be proud of but absolutely must keep in our national conscience. There were only two cosponsors. Perhaps Congress isn’t prepared to pursue this level of historic cleansing just yet.