If you plan to stomach the State of the Union’s parade of poster children Tuesday night you probably already know what to expect. There will be a lot of talk about guns. Talk about jobs. Talk about the Affordable Care Act. If Obama wants to take a chance, he might even congratulate himself for his nuclear deal with Iran. At least Democrats will applaud. He probably won’t say much about an emboldened Kim Jong-un’s nuclear North Korea, one of the better examples of what happens when his rudderless international community fails and falls back on the stupidity of nuclear optimism. 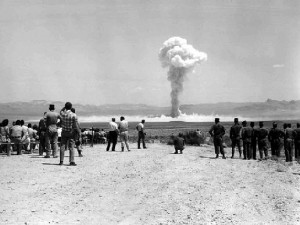 Back in the day: nuclear test on U.S. soil
Courtesy of NASA

The world will be a lot safer when we accept that there are bad people out there who don’t care about things like mass destruction or killing millions. Is Kim Jong-un one of those people? We don’t know. Waiting for absolute proof is not a good idea, but that is the path the world has chosen.

We should thank North Korea’s leader. He is teaching us valuable lessons we are determined to ignore, perhaps because they run so counter to what the world badly wants to believe.

Lesson 1: the world community will do nothing when faced with war

The community of nations is not going to stop Kim Jong-un. He knows it. North Korea’s nuclear program has been a worry for years and the concerns are not lessening. They are escalating.

There aren’t a lot of options with North Korea. Kim Jong-un has gotten away with nuclear tests. His war of words is comical, but while we are laughing we should be wondering what lies behind them and whether he might call our bluff. If he does, it will be too late.

Lesson 2: Sanctions don’t work on everyone

If every person outside of Pyongyang dies from starvation tomorrow, will it make a difference to Kim Jong-un if the military and the bureaucracy are still intact? Sanctions have been in place for a long time. Over ten years ago the State Department’s Bureau of Democracy, Human Rights, and Labor talked of the “human tragedy” within the nation’s borders, observing:

The Democratic People’s Republic of Korea (DPRK) leadership appears willing to let the world feed its starving masses while it pursues its dangerous course of military build-up and the production of weapons of mass destruction. Such weapons pose a grave and growing danger to the U.S. and the world and threaten peace and the economic and political stability of the region.1

We haven’t seen a lot of evidence that things have changed for North Korea’s people. We’ve sat back and watched more nuclear tests. Kim Jong-un hasn’t come scratching at our door for Iran-style accommodations. Why should he? If we think that’s going to happen so we can delude ourselves even further about his intentions, it’s going to be a long wait.

We are making a bad mistake by thinking that our fear and absolute refusal to even consider the use of nuclear weapons means another country won’t use them. ISIS and other terrorist groups have shown us how immune some are to savagery. Genocide has taken place in our time in Africa and in Europe. Millions died in China under Mao and in the Soviet Union under Stalin.

Human nature hasn’t changed so much in less than century that we should take the possibility off the table. We know Islamic terrorists would use nuclear or other weapons of mass destruction. Would Kim Jong-un, a man seemingly uninterested in trading military might for foreign handouts?

One thing we can’t say is that the U.S. doesn’t have the bureaucracy to deal with proliferation. For example, Homeland Security’s National Technical Forensics Center makes sure that “the nation never experiences nuclear terrorism,”2 heeding President Obama’s warning:

There’s still much too much material — nuclear, chemical, biological — being stored without enough protection. There are still terrorists and criminal gangs doing everything they can to get their hands on it. And make no mistake, if they get it, they will use it;3

If the bad guys get it they will use, but what about those who already have it?

Summoning Einstein and warning “of the danger of our wisdom not keeping pace with our technology,”4 Barack Obama congratulated Sam Nunn for his work on the Nunn-Lugar Cooperative Threat Reduction (CTR) Program:

And with your Nuclear Threat Initiative, you helped us ratify the New START treaty, rally the world to secure nuclear materials, strengthen the global nonproliferation regime, and create an international fuel bank for peaceful nuclear power.5

These are all good things, but it doesn’t answer for a nuclear Pyongyang or an Iran that seems determined to flout any possibility of reaching a rapprochement with the West over its military designs, radiological and otherwise.

After the latest nuclear test, our Secretary of State sounded as if he was in denial:

We do not and will not accept North Korea as a nuclear armed state, and actions such as this latest test only strengthen our resolve. We will continue to work closely with our partners on the U.N. Security Council and in the Six-Party Talks to take appropriate action.6

The years pass. The tests continue, including last week’s boast of an H-bomb. While our resolve strengthens, North Korea gets bolder.