The wait is finally over. Beginning today, the world community can see how Iran intends to honor the deal it cut with the West. Hopefully, those who negotiated the terms appreciate the humor in the news of Iran’s new ICBM test and North Korea’s laughable request for a peace treaty.1 Kim Jong-un may be crazy, but he’s paying attention. Did he finally figure out that signing a piece of paper is more important to us than understanding how useless it is? 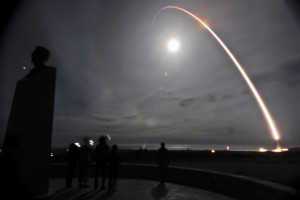 Trust the world community on this

This is a good time to remind ourselves how adroitly the world community handled aggression in the 1930s and 40s. Germany joined the League of Nations in 1926. Dachau’s doors opened by 1933. Years passed, the aggression continued, and world war was well underway when the U.S. was dragged into the conflict because Germany and Italy declared war on us. Talking, treaties, agreements, and diplomats didn’t get the job done.

Not a lot has changed since then. We have watched a string of conflicts and aggressors come and go with one thing in common: until a bad situation escalates to war, the world community can’t be trusted to prevent the eventuality of conflict. That doesn’t make war a good thing and it is not an affront to the diplomatic process. It’s how things tend to work out. The world tolerates bullies until it has no choice but to retaliate.

The threat of nuclear proliferation should take waiting off the table. It won’t, any more than 9/11 kept us from colluding with a terrorist government. We relied on the world community then and we are foolishly relying on it now. Does John Kerry believe that the strength of nations other than the U.S. will prevent Iran or North Korea from doing something stupid? He seems to think so:

Forever is a long time to wonder what Iran is up to, but the question isn’t how long. It’s what we will do when things go horribly wrong. History tells us that until we see a bright flash the world community will talk a lot, wring its hands, and do nothing, especially in the absence of credible leadership from the U.S.

It’s not like Iran’s ballistic missile threat was never an issue. A July 15, 2014 letter from Senators Kelly Ayotte and Marco Rubio signed by 26 senators warned of Iran’s “aspirational goals toward ICBM technologies,”4 noting:

Now here we are again, except that we’re not supposed to be concerned about Iran eventually delivering a nuke on top of a missile because the terrorists we negotiated a deal with agreed not to do it.

What’s a missile without a warhead?

Calling the Iran deal “historic”6 is something Chamberlain would have understood. While assuring us that “Most Americans Support the Iran deal,”* the White House offered a list of need to know items about the Joint Comprehensive Plan of Action including:

Further, we will continue to aggressively enforce sanctions against Iran’s support for terrorism, human rights abuses, missile program, and destabilizing activities in the region.8

We just witnessed a missile launch that, fortunately, won’t violate Obama’s deal because the ICBM didn’t explode a nuke over anyone’s head.

The world community can be trusted to be patient, so Iran can rest assured that there is still time to build a warhead and get it on top of a missile with or without the JCPOA. Is Kim Jong-un about to follow in Khamenei’s footsteps? Let’s hope not. He already has a nuclear capability. We’re better off without an agreement to naively hold ourselves to in the name of a world community united by its inability to stop aggression.