It took eight years and a few weeks. It seemed much longer. At long last we have the immigration order we want. This one isn’t another White House excuse like prosecutorial discretion. It’s not a weepy nod to children in their twenties brought here through no fault of their own or another trick to allow their parents to stay. It’s the real deal. Not only that, we can feel like we are kicking out the Democratic Party. The policies Trump’s order will help quash were a Democratic creation. Now we can rid ourselves of them. 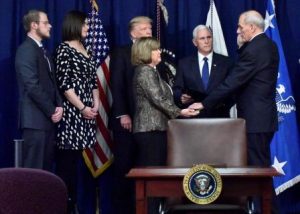 In the wake of DACA, DAPA, lawsuits against states, sham criminal immigration enforcement, sanctuary cities, resident tuition for undocumented students, driver’s licenses for illegals, and the other outrages committed against citizens, this one feels good.

Kicking out the Democratic Party with one new order

Don’t get too excited. We’re not mass deporting Democrats to some godforsaken hellhole, though they might cheerfully kick out conservatives if they had the chance.

Kicking out the Democratic Party is the wonderful analogy behind Trump’s order. It feels like we are finally banishing some of the worst offenses of the Obama era. Our last president ran roughshod over the sanctity of our borders. We gave illegals what they wanted for fear of angering the Democratic Party’s essential Latino voting bloc. Cities harboring the undocumented did what they wanted. It’s true that deportations under Obama were also up, but given the numbers and the efforts made to attract and keep illegals in the U.S., what does it matter?

It is truly amazing how a few strokes of a new president’s pen can suddenly wipe out these abusive excesses. DACA’s temporary amnesty for illegals up to age thirty is still with us. That’s going to be a tough one to get rid of, a lot harder than the criminal illegals sanctuary cities resist holding for ICE.

There is time. This is just a start.

Finally, ICE gets to work for us

The federal actions announced by Homeland Security begin with what we haven’t been doing: enforcing the law. “Classes or categories of removal aliens” are not exempt from deportation.1 That’s the catchall, pardon the pun.

Nothing in the DHS order is unreasonable unless you believe that the way we’ve dealt with illegal immigration is fair to U.S. citizens. That’s not what we will hear from Democrats on Capitol Hill or activists and local officials eager to spread fear in their sanctuary communities. Fear is good politics, but it does have another advantage. Illegals may be a lot less eager to parade in the streets demonstrating against our cruelty than they were under Obama’s protective gaze.

Who said anything about rounding up children? Did government buses pull up to schools so ICE could fill them with screaming immigrant children being ripped from their parents? No, but Chicago Public Schools got the word out that ICE agents would not be permitted in school buildings without search warrants.2

That’s how Trump’s new order will play out with the left. Fear. Propaganda. Fake news. Disinformation. The fact is the new policies don’t do much more than what Obama promised to do. The big difference is that President Trump is acting on his promise. He doesn’t have liberal activists to appease. Catch and release and other loopholes that stop us from kicking out the bad guys are on their way out. We may even live to see the day that sanctuary cities honor ICE detainers and hold criminals for the feds. One more bonus: the lie that the president’s remarks during the campaign were a generalization about Mexicans may finally be put to rest alongside his comments about refugees in Sweden.

Over 25,000 immigrants will become citizens this month.3 An untold number of millions didn’t have to. They took a shortcut. Doing right isn’t always easy. It takes effort. Many fail. Some don’t even try.

We welcome these new immigrants. The millions who took a shortcut? They are in Trump’s hands. Each time one of them is deported it will feel like we are kicking out the Democratic Party once and for all.