What do childhood arrivals eagerly awaiting their DACA rubber stamp have in common with U.S. visa overstays? Homeland Security’s numbers. In a recent federal report the agency admits there are over one million visa overstays it has been unable to match to arrival records.¹ The data problem is a little different with DACA applicants. Most of them are getting what they want when they sign up for Obama deferred action, which raises the question of how the records can show so many illegal immigrants have spotless pasts?

New figures released by the Government Accountability Office don’t give us any reason to feel better about problems tracking foreigners, including those who attend U.S. flight schools.

Two years ago the GAO pointed out that Homeland Security was only dealing with a “small portion” of U.S. visa overstays and was plagued with 1.6 million unmatched arrival records.² Two years later DHS has worked down the backlog to one million but still has problems matching up visa arrivals and departures. When we hear things like:

DHS has actions completed and under way to improve data on potential overstays and report overstay rates, but the impact of these changes is not yet known.³

Federal law requires DHS to report overstay estimates, but DHS or its predecessors have not regularly done so since 1994.4

How much should we worry about who gets across our borders on U.S. visas and never leaves? The White House assures us that this time around, it can throw out the bad guys:

The President’s proposal creates a streamlined administrative removal process for people who overstay their visas and have been determined to be threats to national security and public safety.5

Sounds great, but we have to find them first.

Are Obama deferred action results too encouraging to believe?

If you are one of the lucky childhood arrivals who qualify for Obama deferred action, chances are you are going to get that pass on being deported. Those who have their cases reviewed are almost certain to be approved. Through April 2013, only 2,352 of 294,211 reviewed cases were denied.6Can our government cough up an explanation that will convince us that all those DACA applicants really are squeaky clean?

What do visa overstays and DACA approvals have in common? We decided not to go after illegal immigrants who were not considered a threat. The White House refers to visa overstays who “have been determined to be threats.” How long before overstays are no longer something we think about until we discover that someone we let slip by is dangerous, at which time we will discover that we don’t know where they are?

Update January 20, 2016: Homeland Security released 2015 overstay figures yesterday. While DHS touted a 99% departure rate for nonimmigrants visiting the U.S., the report also confirmed that “by January 4, 2016, the number of Suspected In-Country overstays for FY 2015 had dropped to 416,500, rendering the Suspected In-Country Overstay rate as 0.9 percent.”7

Update September 2, 2017: when does an overstay not break the law?

Chicago area news outlets including the Chicago Sun Times8 are reporting Congresswoman Jan Schakowsky’s support of a woman in Berwyn who long overstayed her visa and has been told to leave the country. This is a wonderful media opportunity for Schakowsky and an even better opportunity for taxpayers to see what we buy with the federal dollars that pay congressional salaries.

Visa overstays are even more egregious than putting up with DACA because they are such a flagrant violation of the law. Certainly the “no fault of their own” test favored by Capitol Hill Democrats does not apply because these individuals know full well that their pass to stay in America has run out. They also know that we don’t have the resources to track them down and sadly, the courage to stand behind our laws. Stay tuned for updates on how this case is handled. 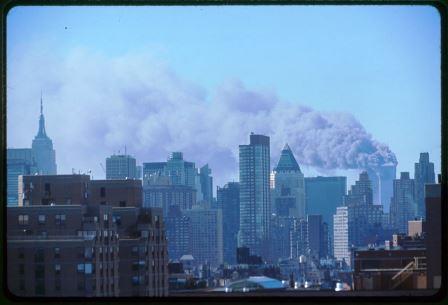 We Remember
Courtesy Library of Congress

Thanks to Hurricane Florence and the passage of years, today’s 9/11 anniversary feels like an afterthought. Here in Chicago it’s warm and sunny this morning, exactly like it was the day the World Trade Center towers fell to the ground.

The numbers look much worse.

That’s a lot of people and a lot of visa overstays not to account for. On 9/11 it only took two.