What a sorry question to have to answer: are Mexicans criminals, rapists, and drug dealers or are they hard-working, long-suffering Hispanics who only want to help us make America better? California, the state with the largest Hispanic population, will decide on Tuesday. Primary voters can choose between two positions on an issue that has little to do with running the country and everything to do with inflaming the people over a painful, divisive problem.

Hillary Clinton and Donald Trump have one thing in common neither will fess up to. Both come off like cheap, tin pan dictators when they get in front of a camera. Clinton adopted the same Mussolini-style stiff-chin smugness that Trump has used from day one. It doesn’t work, especially while we listen to what comes out of their mouths as they suck up to their supporters over an issue that has turned attendees violent at Trump campaign appearances. 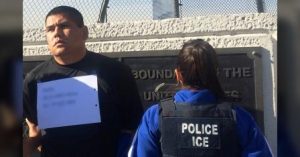 Why Mexicans are criminals and Hispanics are not

Mexicans come from Mexico. Hispanic and Latino citizens can come from anywhere and most important, they can vote. This is a fine and largely political distinction, but enough of a difference to get a presidential candidate with a big mouth and obstinate nature in trouble.

Trump’s mistake when talking about a federal judge recently wasn’t in asking that he step aside. He screwed up by labeling him a Mexican, albeit because of his ancestry. This wasn’t an ideological mistake. It was a verbal gaffe. Had he called the judge a Hispanic there would not have been a problem other than the suggestion that the judge’s loyalties lie somewhere other than America.

Don’t blame Trump for that.

Senators, representatives, activists, state and local public officials and yes, Hillary Clinton are all guilty of putting the demands of illegals ahead of the law. Those who share a common Hispanic or Latino heritage are the worst panderers of all. They are not doing it to be fair or to save money. They are doing it because they are absolutely terrified of losing votes.

Chicago’s Luis Gutierrez traces his ancestry to Puerto Rico, not Mexico, but he exemplifies this kind of wanton ethnic fawning. Suggesting Trump is a bully and a bigot without coming right out and saying it, Gutierrez charged:

Puerto Ricans are citizens, a fine distinction ignored by activist politicians who have convinced themselves that Mexicans here illegally are Americans. Gutierrez is right, of course, about the millions of green card-holding immigrants and those who follow the law and the legal path to citizenship.2 Pandering works both ways, though. Trump is also guilty of pulling the strings of the right, anti-immigrant contingent who, like Hispanic and Latino citizens, also have the right to vote.

Once and for all, are Mexicans criminals, rapists, drug dealers, or saints?

When you are already labeled a criminal, rapist, or drug dealer do you really want to reinforce the stereotype? The Hispanic community has some accountability here thanks to disruption of Trump appearances that show the same disregard for our First Amendment rights as Mexican illegals show for our immigration laws.

When it comes to illegals Trump is at least partially right. Criminal illegal immigrants are a big, expensive problem made worse by politics, including White House rhetoric that confuses the boundary between and citizens and non-citizens:

They work hard, often in tough, low-paying jobs. They support their families. They worship at our churches. Many of their kids are American-born or spent most of their lives here, and their hopes, dreams, and patriotism are just like ours. As my predecessor, President Bush, once put it: “They are a part of American life.”3

Trying to be American by violating the law doesn’t make a Mexican citizen one of us. Suggesting otherwise is dangerous rhetoric to be tossing around, the kind of language that fuels violence at campaign events by people convinced they are being treated unfairly.

Trump has been accused of some risky rhetoric of his own by his chief opponent. Hillary Clinton calls him dangerous, something she doesn’t have to point out because Trump and the media have done the work for her. This plays a lot better than defending a past going back to Whitewater and a stumble over a piece of computer hardware that she can’t explain any better than she can articulate the justness of immigration policies she borrowed from Barack Obama and plans to extend even further.4

The worst offense committed by both candidates, the media, and elected officials who have the voting public’s ear is to think that we can’t see through the angry words, the bombast, and half-truths. We have arrived at a truly shameful moment where the most contentious issue behind the presidency is whether a Mexican is a criminal or a Hispanic American citizen-in waiting. Voters should wholeheartedly reject anyone who lends this question so much as a moment of lip service in search of votes, but since it seems to be what attracts the most attention for our two candidates we don’t really have much of a choice but to listen.

Update June 11, 2016: this week added RINOish Illinois Senator Mark Kirk to the list of sellouts throwing Trump under the bus for his remarks. If Kirk doesn’t care about the future of the GOP and assumes he will get stomped by Democrat Tammy Duckworth in November, could he just step aside now and give us a chance to put a conservative in his Senate seat?