Hondurans TPS (Temporary Protected Status) in the U.S. was cancelled earlier this month but the war of words and disinformation is just starting. Even though TPS is meant to be exactly what it sounds like, we learned from DACA that temporary means different things to different parties.

TPS for Hondurans lasted twenty years, but even two decades of temporary isn’t long enough to please everyone.

What Hondurans TPS protection is supposed to mean

U.S. Customs and Immigration Services’ explanation of TPS is pretty simple and straightforward:

TPS is a temporary benefit that does not lead to lawful permanent resident status or give any other immigration status.1

There isn’t a lot to mistake about the reason we granted this protection to Hondurans:

Hurricane Mitch swept through Central America causing severe flooding and associated damage in Honduras. Based on a thorough review by the Departments of State and Justice, the Attorney General finds that, due to the environmental disaster and substantial disruption of living conditions caused by Hurricane Mitch, Honduras is unable, temporarily, to handle adequately the return of Honduran nationals.2

That got the ball rolling when Bill Clinton was president. The problem now is that no Central American country will be judged able to handle the return of its residents no matter the circumstances whether they are temporary or outright illegal. Just like ending DACA, the political cost to Democrats is too high. 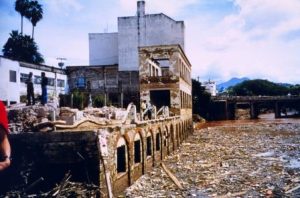 20 years later: Hondurans are here for a new reason

In a letter to Homeland Security, 53 members of Congress admit that TPS was offered to Hondurans for reasons that have nothing to do with their arguments for having that protection extended:

As you know, in 1998, the people of Honduras faced a series of natural disasters that left their country devastated.3

That was a long time ago. The new excuse is violence and political instability:

In fact, conditions have substantially worsened in recent months. Well-documented irregularities in Honduras’ November 26, 2017 presidential election led to massive street protests, and the government responded with excessive use of force.4

There is nothing especially unusual about that scenario in Central America. Nor was there anything unusual about the Obama Administration holding U.S. taxpayers accountable:

For Fiscal Year 2016, the Administration plans to provide up to $750 million to implement its strategy in support of the Northern Triangle’s Alliance for Prosperity Plan, and other regional priorities. This figure more than doubles U.S. assistance to Central America of $305 million in Fiscal Year 2014 and represents a thirty-four percent increase over the $560 million allocated to the region in Fiscal Year 2015.5

The millions from Obama came with a requirement that countries receiving U.S. support protect human rights.6 The new congressional missive confirms that this didn’t happen:

According to the United Nations High Commissioner on Human Rights, Honduran security forces killed sixteen protesters. Unfortunately, the government’s failure to resolve post-election crisis has only increased the instability that continues to plague the country.7

We do the best we can, but this isn’t a problem for taxpayers. Nevertheless, after twenty years of keeping these people safe from the ravages of a hurricane the White House is under attack because the Trump Administration decided temporary should mean exactly that.

To a reasonable person the administration’s plan to bring Hondurans TPS Protection to an end sounds plenty fair and reasonable.

To allow for an orderly transition, the effective date of the termination of TPS for Honduras will be delayed 18 months to provide time for individuals with TPS to arrange for their departure or to seek an alternative lawful immigration status in the United States, if eligible. Honduran citizens in the United States who benefited from TPS may still receive other protections under our immigration system for which they are eligible.8

That started the attacks.

The Congressional Hispanic Caucus called Homeland Security Secretary Nielsen’s announcement “the latest attack on legal immigration” that will “rob $10.9 billion from U.S. GDP over 10 years and undermine our interest in a stable and secure Central America.”9

Stable and secure is a lost cause, but Caucus Chair Lujan Grisham (D-NM) is right about one thing. Bringing Central America to the U.S. will make life more stable and secure for anyone who makes the trip. That doesn’t make it good for us, though it will be another feather in Democratic caps.

Anger, venom, and disinformation over the end of TPS

Democrats call the new policy “misguided,” “hateful,” and “anti-immigrant” 10 because in their world “temporary” means a political foot in the door that lasts forever, like DACA.

What’s absolutely false is the claim that we are mass deporting Hondurans. Deportation is a legal term, not just a partisan dirty word. It means removing a foreigner because they violated the law.

That distinction was lost on Rep. Charles Crowley (D-NY). He issued a not okay press release blasting the “Trump administration’s mass deportation of Hondurans”11 even though nothing has happened yet:

There is absolutely no benefit to the United States in deporting nearly 60,000 hardworking Hondurans who contribute so much to our economy, our communities, and our country.12

The benefit is preserving some semblance of the rule of law and the trust of America’s citizens that the government will follow through on what it promises.

Like temporary, the rule of law also means different things to different politicians.

California Rep. Zoe Lofgren and New York’s Jerrold Nadler spoke of violence and murder in Honduras and concluded that we were stripping these people of their legal immigration status:

TPS recipients are legal immigrants who will be stripped of their legal status. This decision is a further indication that this Administration’s immigration agenda has nothing to do with the ‘rule of law’ but has everything to do with xenophobia and hate.13

Stripping residents of their legal status is closer to the truth than what we heard from Rep. Crowley, though mass deportation probably plays better for party members.

Congressman Jimmy Gomez spoke of danger, uncertainty, and came full circle back to disinformation about a mass deportation agenda:

I urge my colleagues in Congress to protect TPS holders from Trump’s troubling agenda of mass deportation, and work to immediately pass the American Promise Act. 14

It’s not as if we expected a thank you after twenty years from a party that’s determined to force U.S. taxpayers to be responsible for whatever ails the world so members can take credit and dump the burden on the rest of the country. We have a proud history of providing humanitarian assistance and offering refuge. Democrats will continue to push the envelope and spread disinformation about U.S. immigration policy no matter what it does to our well-deserved reputation for lending a helping hand to legal immigrants and temporary residents.

10. “Chairman Crowley Statement on the Trump Administration’s Mass Deportation of Hondurans.” Dems.gov. May 4, 2018. https://www.dems.gov/newsroom/press-release/, retrieved May 7, 2018.