Home » Immigration » Democrats Betrayed Immigrants and Demand We Count Them

It hurts to be betrayed. We’ve all felt it after voting with high hopes only to be double-crossed when the time comes to get what we voted for. Republicans should be feeling it over the massive bipartisan budget our party helped pass, though for some the military funding boost makes this monstrosity palatable. On the flip side, Democrats betrayed immigrants who were used by the party before members went on to worry about other things.

The March 2018 omnibus was the Democratic Party’s chance to take a final stand for their favorite special interest. Members voted. The budget was passed. Illegal immigrants were left out.

What happened – did someone in the party suddenly notice that these people can’t vote?

The party of donkeys isn’t finished. Democrats are stubborn. Their scare tactics never stop. They know they can keep using immigrants without having to do a single thing to help and use them they will, as long as they can be counted.

The dirty work is done. The deal is sealed. Folks, we have the largest spending bill in history.

That’s doesn’t mean it’s time to rejoice, especially if you are one of those think we aren’t spending enough.

House Democrats believe there is a lot of spending left out of that $1.3 trillion omnibus package including college funding, affordable senior housing, and Social Security spending.1

With so much more to spend on there’s plenty to be unhappy about, but the Congressional Progressive Caucus managed to find a thin silver lining:

While we are pleased this bill represents a massive rejection of President Trump’s budget, it falls short on key progressive issues.2

Are immigrants one of those issues? They weren’t in the budget, but they’re still useful to the CPC for making remarks like this:

Congressional Republicans and the Trump Administration also continued their assault on immigrant communities by once again refusing to protect Dreamers.3

Republicans weren’t the only ones.

Dems vote on spending, not DREAMers

After they raised a stink over Dreamers and brought Washington to a halt, Democrats changed their minds on their favorite pastime: spending.

The Yeas on the final House vote for the March 2018 omnibus spending bill were 145 Republicans and 111 Democrats. On the Senate side 39 of the 65 yes votes were Democrats, including immigrant supporter Dick Durbin (D-IL).

When push came to shove and a big, fat spending bill was laid at their feet it was immigrants be damned. Democrats couldn’t resist siding with the GOP.

Nor, can I vote for a bill that forsakes young DREAMers, forcing them to live in fear of deportation. I have pledged to strengthen and protect the Affordable Care Act, and I have committed to never abandon DREAMers in their fight. These are promises I am not willing to break.5

Other party members were more than willing and that’s exactly what they did. Fortunately, they now have a new issue to cover up their treachery. 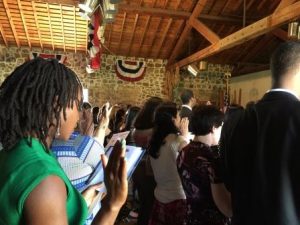 Census is a new chance for immigrants to count

If you’re going to call someone an American who isn’t it stands to reason that the Constitution doesn’t matter either and neither does the U.S. Census.

With a Dreamer deal dead and buried the best immigrants will get from Democrats is this:

Congress must now take action to protect the census and its important mission as laid out in the Constitution. I’m proud to support Congresswoman Carolyn Maloney’s 2020 Census Improving Data and Enhanced Accuracy Act [IDEA] and I urge Republican Leaders to bring this critical legislation up for a vote. We must do all we can to ensure our immigrant communities are able to participate in the census.”6

There are Americans in name only and then there are real Americans. The Census counts both with no regard to citizenship. That’s an affront to our democracy just as serious as alleged tampering by Russia.

Mandated by the Constitution, the decennial census ensures the equitable apportionment of the House of Representatives, supplies the empirical information needed for Congress and the President to make evidence-based policy decisions and distribute billions of dollars in annual federal aid, and provides the private sector with data to make millions of sound business decisions every year.7

It helps to know where Rep. Maloney stands on immigrants:

Congress is on a collision course regarding the fates of nearly 800,000 Dreamers. These young people are Americans in all ways but on paper.8

That puts things into perspective. When we count them they are Americans on paper, too.

Democrats didn’t side with immigrants when they voted for the omnibus, but they will still use them for the Census to secure a false base of representation. Just because immigrants were betrayed doesn’t mean they won’t still come in handy.

Hispanic Caucus honesty: money is why we need to quash citizenship question

Is the tide turning?

California communities including Orange County are saying no to sanctuary policies. The Arizona Supreme Court just ruled against giving in-state tuition to DACA recipients in a move AZCentral reports will massively increase the cost for these individuals to attend public colleges.

The House and Senate made their decision on spending. DREAMers weren’t included. No wonder the Congressional Hispanic Caucus is upset over the proposed Census immigration question.

Chair Michelle Lujan Grisham (D-NM) makes it clear why it is so important to Democrats that this question be quashed:

This troubling decision will have long-lasting consequences for cities and states that will result in inaccurate data, which jeopardizes the disbursement of nearly $700 billion in health, food security, transportation, education, and other funding that provides essential services for everyone, especially immigrant and low-income communities.9

Rep. Lujan Grisham is absolutely right. These services are for everyone. That’s why we should only be disbursing them to taxpaying citizens.

Last summer the census question continued to rage. So absurd is the effort to cover up the reason Democrats want to ban the citizenship query that everyone living in the U.S. suddenly became an American:

Our Founders enshrined the Census as a pillar of our democracy, ensuring that all Americans are equally counted and represented.10

American citizens are not the issue, but then the words “citizen” and “American” mean different things to different people.

Chairman Elect Castro continued: “We will also continue holding the Administration accountable for their failed handling of Hurricane Maria, and dishonest efforts to add a citizenship question to the census.11

Let’s drill to the bottom of this nonsense and let the Census Bureau tell us why everyone is so upset:

Federal funds, grants and support to states, counties and communities are based on population totals and breakdowns by sex, age, race and other factors.12

There you have it. Instead of waving American history and honesty in our face, Democrats opposing an accurate count should just admit it’s all about the money.

10. “Make Your Voice Heard on the Addition of a Citizenship Question in the 2020 Census.” Jose E. Serrano. August 2, 2018. https://serrano.house.gov/media-center/serrano-report/make-your-voice-heard-addition-citizenship-question-2020-census, retrieved December 25, 2018.