Home » Current Events » Hateful is the Democratic Buzzword for 2017

Hateful was the winning buzzword for Democrats in 2017. Party members used it liberally and usually in conjunction with another word: Trump.

A lot of hateful from one congresswoman

This was a year where we heard about “hateful Executive Orders,”1 “hateful rhetoric, policies, and actions,”2 and “hateful policies that do not reflect our widely-shared values as a nation.”3

All of these came from one California Democrat, Representative Judy Chu.

That’s a lot of hateful for one year, but we’re just getting started.

Hateful is the Democratic buzzword, but ‘otherizing’?

Transgender service members subjected to a “hateful and discriminatory attack”4 were spared the “hateful policies of President Trump’s administration.”5 That wasn’t enough, so Democrats worked themselves up over “Trump’s hateful vilification and ‘otherizing’ of immigrants and communities of color.”6

I don’t know if “otherizing” is even a word, but we got the point. For those few who didn’t, two heavy hitters drove it home.

Nancy Pelosi, the Democratic Party’s Queen of Pomposity, got in on the fun. She accused the president of:

… a vile, hateful agenda that will blindside thousands of patriotic Americans already serving with honor and bravery.” 7

There are more examples than I can count but they all end in the same, hateful place.

That doesn’t mean Democrats are finished. 2017 isn’t over yet.

A buzzword for mindless repetition

There is a reason why we hear the same simple chants at protest rallies. Short slogans are easy for small minds with a very narrow agenda to remember. That’s why the best buzzwords are selected for mindless repetition, even when it makes the perpetrators look bad.

Next time perhaps they can use “hateful” and “political machine” in the same sentence. It shouldn’t be difficult. 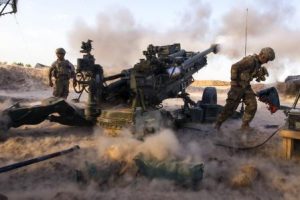 When hateful is not a buzzword

The White House uses the Democratic Party’s favorite new buzzword too, but to entirely different effect. For example:

Terrorism is a hateful ideology11 and so is ISIS propaganda behind domestic terror like the recent attack in the New York subway.12 Anti-Semitic threats13 are also on the list, despite Democratic suggestions earlier this year that the president was part of the threat.

“Hateful thoughts?”14 That phrase came up at a White House press conference.

It didn’t come from the Trump Administration.

It came from the press.

It didn’t take long to swap out “hateful” for a new buzzword. After an ill-advised White House meeting last Thursday to talk about the DACA fix we have the word that will set the tone for the year in politics.

I don’t know whether Trump said it or not, but it hardly matters now. Democrats can set “hateful” aside and torment the nation with their new buzzword for the next 352 days.