Who could have guessed that homophobia is funny and acceptable when the target is the president of the United States?

By now you’ve heard what Stephen Colbert said about President Trump. Imagine the president making a similar joke about Hillary Clinton, Elizabeth Warren, or another public figure. The cries to impeach from insanely PC Democrats would run him out of Washington. Fortunately for Colbert, enough Americans have been taught by the left that disrespect and even hatred for the president is okay that the entertainer will score a win with anti-Trump remarks no matter what they are. 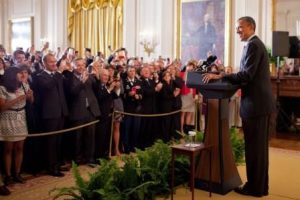 What makes an insult offensive?

You can insult famous people without being offensive. Entertainers can make sensitive topics funny. Richard Pryor’s standup routines are a perfect example. He could get away with the things he said, in part because he was so self-deprecating. Inept comedians using the same material would be burned at the stake.

The late Don Rickles could insult without being hateful. A long list of comedians who do blue know how to make it work. They know where the line is and when not to cross it.

Colbert’s anti-Trump routine was different. The problem isn’t what he said. It’s that he felt justified engaging his audience by saying it even though his joke stomped on a popular liberal sacred cow. Why? Because disrespect for Trump is now widely regarded as a proper, politically correct, no-holds-barred pursuit.

If you want an example of how much liberals dislike Trump, sit back and wait for them to criticize Colbert and his network after their pro-LGBT values took a hit. It will be a long wait.

Homophobia is funny and perfectly OK when?

The definition of homophobia just changed. Now it’s both bad and good. It’s not off limits on television any more. In fact, we just discovered that homophobic humor can be acceptable and appropriate.

How can liberal America reconcile this attack with its tireless support for the LGBT community? Democrats call for the heads of every Trump administration official for the slightest innuendo that offends their liberal sensibilities.

When Trump tagged Steve Bannon for an administration post, California Congressman Ted Lieu responded with this:

President-elect Trump must withdraw the appointment of Steve Bannon as White House Chief Strategist. Bannon’s Breitbart engaged in racist, anti-Semitic, xenophobic and homophobic hate speech. Now Bannon has a seat in the Oval Office and that is unacceptable.1

How do Democrats respond to a gay joke?

Democrats obviously believe that homophobia is bad, so what’s their response to a televised joke I don’t feel comfortable repeating on this website?

Do you hear crickets?

Why didn’t we immediately hear outraged voices in Congress demanding a boycott of the network and this late night show? Simple. These kinds of remarks are now PC because they serve the liberal goal of ousting Trump. The silence shows just how far leftist hypocrisy and rabid anti-Trumpism have descended.

Members of Congress wore white during our president’s first State of the Union. Women marched on Washington and it’s true that recorded remarks by Trump that came out during the campaign were absolutely unacceptable. The big difference between Trump’s comments and Colbert’s is that Trump’s were not meant to be recorded and replayed. Colbert’s were part of a routine made to appeal to millions of viewers. After all, television is about ratings, not rejection.

Is this what America wants to hear?

UPDATE May 31, 2017: Now we have a celebrity who thought it would be funny to take a picture with Trump’s head. Even the media won’t get behind this one. Thank Kathy Griffin for helping us discover that there is a line, after all. Her career just crossed it.