Greed is great. It’s such a powerful motivator that it can even make you president, or at least that’s the hope of two Democratic Party candidates looking to face off against Trump in the 2020 presidential race if the House doesn’t unseat him first.

The power of greed in Washington is hardly an earth-shattering concept. Election politicking is all about giving away, but since government doesn’t produce it has to take. That means greed thrives on both sides of the tax and spend equation. Candidates support taking away so they can give more. Voters have to be convinced that it’s fair and just for Americans to advance themselves at the expense of their fellow citizens.

There was a time when that idea would have been a tough, offensive sell. Now it’s at the core of Democratic Party plans to secure the presidency.

What is new for 2020 is the vindictiveness of two early contenders focused on offering vast amounts of money to voters who will arrive at the polls with their hands out.

Greed is great for Bernie Sanders and Elizabeth Warren. They aren’t embarrassed to let us know just how far they are willing to go to fulfill their desire for power at the expense of the economy. 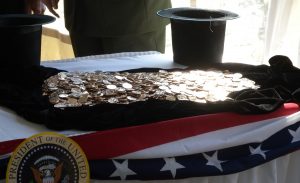 If you are going to give things away to millions of people in exchange for their trust and support you have to be greedy enough to get your hands on enough money to have something substantial to offer. The ante is raised election after election. Billions won’t get the job done anymore.

That’s why the escalating size and quantity of the giveaways is now so vast that the left is advocating the destruction of America’s economic system altogether in exchange for full-blown, Green New Deal socialism.

In pursuit of that goal Warren offered voters $2.75 trillion well in advance of the 2020 election. She just sweetened the pot with a $70 billion “affordable”1universal child care plan and has also come out in support of reparations for slavery.

Bernie Sanders was already in for $2.2 trillion2 before he announced his candidacy. He recently joined Rep. Peter DeFazio (D-OR) to propose a Social Security expansion that includes giving benefits to students by restoring a giveaway that ended 35 years ago.3

For the seniors Social Security was intended to serve before it became a bloated, beleaguered entitlement:

The legislation would increase benefits by about $1,342 a year for seniors now making less than $16,000 annually and increase cost-of-living adjustments by more accurately measuring the spending patterns of seniors.4

Cory Booker, Kirsten Gillibrand, and Kamala Harris are all in on this one.5 That’s not a surprise. Their party will never give up pushing the myth that Social Security equates to a secure retirement.

Back to Sanders’ $2.2 trillion. He looks to get his hands on it with the “For the 99.8% Act.” In a shameless press release that mirrors fellow candidate Elizabeth Warren’s announced plans for acquiring her own astronomical sum, the senator names the Kochs and Amazon’s Jeff Bezos as ripe and ready for plucking.6

A former bartender blamed for helping New York City lose tens of thousands of jobs and untold tax revenue is not one of the people I would want to be associated with during my run for the presidency. The problem is that it will be very difficult for voters to separate the harebrained, naïve, uninformed schemes offered by Rep. Alexandria Ocasio-Cortez and other extremists from the more sophisticated nonsense promoted by Sanders and Warren. Certainly their desire to get their hands on as much ready spending cash as possible throws them into the same greedy basket.

“Deplorable” would be an appropriate label, to coin a favorite from the 2016 race.

The good news for these two candidates is that a media that also depends on the uninformed masses will put their respective greed is great platforms front and center. Nothing satiates voters’ anger over being treated unfairly like appealing to their baser instincts and the media is just as greedy as the worst, most unethical political candidate.

Political greed and the public trust

Democratic propaganda has successfully turned record low unemployment and tax cuts into an economic disaster for most Americans. Our land of opportunity is now the land of entitlement.

Neither Warren nor Sanders are fans of greed even though both are showing their greedy natures.

Warren assails “greed run wild.”7 Sanders warns of “greedy Wall Street vulture funds”8 in a press release with Warren about debt-ridden Puerto Rico that is something voters should pay attention to before they decide whether either one of these people should get their hands on our economy.

Unlike this destitute territory, when America goes down there won’t be anyone to bail us out.

Sanders takes his show even further than Warren. He features Amazon founder Bezos on his mean-spirited “Faces of Greed” webpage.

He also offers a riddle about greed that asks what Bernie, the Pope, Barack Obama, and a hedge fund trader have in common. It’s not hard to guess the rest. The question leads you to a discussion of “wealth addicts.”

Ironically, neither Sanders nor Warren would apply that label to themselves even though their quest for trillions speaks to the very worst kind of greed there is: greed in the name of the public trust.

Most of us simpleminded non-politicians understand the obvious problem here. There is only so much cash to go around and so many things to give away. The incessant greed of politicians and voters who would rather take away than contribute ends in a socialist ghetto where only political elite like Warren and Sanders will prosper.

Are we dumb enough to push for an economy where no one works and everyone has everything they need?

Earlier this month Sanders announced the finalists in his annual State of the Union essay contest. The purpose is for high schoolers to:

describe which issues they would prioritize if they were president.9

This is what democracy is all about10

His essay contest may mimic the democratic process that encourages every voice to be heard, but his own reaction to the SOTU speaks to a different purpose:

let us bring people together to take on and defeat a ruling class whose greed is destroying our nation.11

Is this what our Democratic Party candidates will teach our kids about American democracy?

I don’t know how much Native American DNA Elizabeth Warren has sloshing around in her veins, but I know a shameless political ploy when I smell one.

As The Daily Caller reports, the senator dropped a bombshell we should have anticipated during a stop in New Hampshire when she added reparations for Native Americans to tired proposals to compensate Americans for slavery.

This is a bold political move on her part, but in a twisted way it makes sense. She is not going to be able to make the issue of her heritage go away so she might as well use it to add to the growing greedy giveaway bill she plans to dump on high earning taxpayers.

Warren has already apologized for her Native American gaffe, but nothing says “I apologize” better than money.

We all know how much politicians’ words are worth.