Diversity is a pillar of the Democratic agenda that is threatening to crush hopes for a sweeping takeover next year. One of the party’s greatest strengths has always been its ability to reach a consensus, or at least the appearance of agreement on what members stand for. Now fringe elements are forcing the party down the same path that turned Republicans into a House minority.

Last week House Democrats said yes to one of their most inflammatory new members. They refused to face facts with their reality-dodging, anti-hatred resolution. This was an amazing failure from a party unable to deal with the dark side of diversity that raises a perplexing question:

Is a diverse Congress less capable of governing?

Diversity is one of liberal America’s most treasured values. It weakens the Democratic Party by forcing members to tolerate extreme agendas with the potential to send moderate voters racing for the exits. Diversity tells the party leadership that it has no choice. 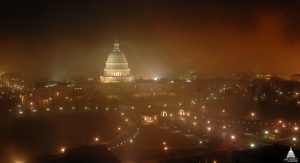 Diversity means dark days for Democrats
Architect of the Capitol

Diversity forced Democrats to compromise. They should have just said no.

Ignoring the outpouring of anger stirred up by Rep. Ilhan Omar (D-MN) is one of the signs that this party is too accommodating and too full of its own self-described virtues to face reality.

Revelations about another member, Rep. Rashida Tlaib (D-MI), were included in a Republican House resolution we didn’t hear much about that also tackled the issue of anti-Semitism:

Whereas, Representative Tlaib, who stated on January 6, 2019, of Americans who support Israel, “They forgot what country they represent.”1

Omar also received credit in the resolution for a 2012 anti-Israel tweet:

Israel has hypnotized the world, may Allah awaken the people and help them see the evil doings of Israel.2

The Republican Party seems bent on extinction while Democrats are surging, but both have a devastating affliction in common: they can’t reign in their most destructive elements.

Despite evidence to the contrary the Congressional Black Caucus claims:

In fact, a diverse institution is a weak institution when diversity forces us to accommodate unacceptable viewpoints whether that means ethnic hate or economic lunacy.

In this country, our diversity is our greatest strength.4

It is their greatest strength because few congressional Democrats will say no to members who affirm the party’s diversity stance. That means these new members can bully the party into accepting ideas like the Green New Deal’s absurdist economic boondoggle.

Strength from diversity becomes a weakness

Diversity run amok is a disaster in politics. Omar and Tlaib are emblematic of the problem. Why? There is a difference between diversity as most of us understand it and diversity for Democrats.

Democratic Party diversity means that Republicans and conservatives are excluded. The wealthy are anathema to America’s survival. White men are evil and immoral. Illegal immigrants make us stronger. Muslims are untouchable but Jewish Americans are on shaky ground even with the House’s most fervent diversity-backers.

This is where misinterpreting the strength of diversity fails America.

Is the Democratic Party leadership all in?

After last year’s midterm election the House Progressive Caucus reprinted an article from Common Dreams pitting old guard Democrats against newly elected members of Congress and a Progressive Caucus that has “no intention of watering down its demands.”5

The article also claimed that Rep. Omar is the “future of party leadership.”6

Wrong. She is symbolic of the party’s greatest weakness: confusing racial and ethnic diversity with accommodating extremist views from diverse people. They are not the same thing.

Blind Democrats believe it’s all in the numbers

You can’t govern if you can’t agree despite Nancy’s Pelosi’s insistence that diversity statistics are a source of strength:

House Democrats take great pride in the fact that our Caucus is more than 50 percent minorities, women and LGBT Members,” said Leader Pelosi. “We do so because we understand that the beauty is in the mix, and the diversity in our ranks is both a strength and a reflection of the American people it is our great honor to serve.7

Rep. Josh Harder’s (D-CA) office boasted the makeup of his staff in a press release that competed with other Democrats for the diversity prize:

out of nearly 100 new members of Congress, his office ranks second in diversity among the senior staff.8

Truth from a Republican

Oklahoma Republican Markwayne Mullin set the numbers aside and spoke the truth instead:

The halls of Congress have no place for racism. Every member of Congress is elected to represent an extremely diverse group of individuals from every race and every walk of life. That’s what makes the United States unique.9

That’s what diversity is really about. It’s what Democrats forgot last week and will likely continue to forget at their peril.

UPDATE May 14, 2019: nothing calming about Tlaib’s new remark

Here we go again. Is it bad judgment, a poor choice of words, or something else? Republican Steve Scalise responded:

There is no justification for the twisted and disgusting comments made by Rashida Tlaib just days after the annual Day of Holocaust Remembrance. More than six million Jews were murdered during the Holocaust; there is nothing ‘calming’ about that fact.10

Rather than speculate on what is behind the congresswoman’s words, it’s more useful to consider her retort to the predictable outrage:

Trump has doubled down on his party’s use of the Holocaust to score political points.11

Later in her statement:

This is yet another attempt by the administration and the GOP to try to distract from their horrible policies, lawless acts, and actual anti-Semitic rhetoric.12

Anti-Semitic rhetoric from Republicans who are diehard supporters of Israel? Seems unlikely. Saying something is true doesn’t make it so. Democrats are fond of charging Trump with racism, but it’s not a catchall. Tlaib didn’t offer any examples of GOP or Trump anti-Semitism. Instead she went into a rant about healthcare.

We’ll never know what was behind her comments, but we can probably agree that using the Holocause as a political football is fundamentally wrong.

Instead of adding to the angry back and forth let’s chalk this up to a judgment issue that would have been better handled with a careful, considered response that’s entirely unnecessary because Democrats will back whatever party members say while they dissect and misconstrue every syllable that comes from Trump’s mouth.

8. “Harder’s Staff One of the Most Diverse in Congress.” Josh Harder. February 13, 2019. https://harder.house.gov/media/press-releases/harders-staff-one-most-diverse-congress, retrieved March 7, 2019.