As badly as they want you to believe it, our country hasn’t turned to the dark side because of Trump. He’s not the devil. The devil is in the Democrats who skulk around waiting for opportunity to knock so they can make another play for America’s soul. Their payday might be a mass shooting. It could be a hate crime. It may be a public appearance and a chance to play fast and loose with the truth. If their prayers are answered we might even get hit with a recession.

Watching America’s middle class fall on hard times while Trump is president would be infinitely more pleasing to the party than prosperity. Democrats like Steny Hoyer (D-MD) are still finding all the bad in low unemployment as they recall their glory days during the Great Recession:

The July [2019] jobs report tells the story of American economic resilience in the face of serious challenges and a failure by the current Administration to build on the policies that brought about our recovery from the Great Recession.1

In July the unemployment rate was 3.7%.

This is how Old Scratch works his magic. When bad things happen it’s the devil’s good. If bad things don’t happen they are created. This is where Democrats excel. They have turned so far to the dark side that they don’t even realize what they have become. 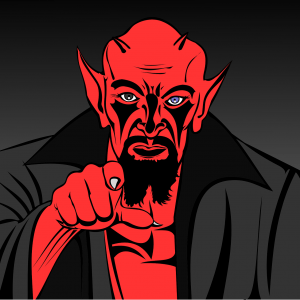 Devil is in the Democrats: three things to beware

Democratic Party members have three traits religion and folklore attribute to the devil: pride, deception, and division. These are the evil tools of politicians who want to steal America’s soul.

Democrats admit we don’t trust them

The House Democratic Caucus talks about trust in government:

It’s no wonder that Americans’ trust in government is near an all-time low: over 80 percent say they can’t trust those in Washington to do what is right.2

Our trust is a big deal because we own the government. America is not 80% Democratic, so what does that tell you? Democrats must not trust Democrats either, no matter how much the party boasts its accomplishments. How can we trust wealthy politicians who blame America’s problems on the wealthy?

False pride is where the devil in the Democrats begins.

Pride: Democratic Party hubris is at an all-time high

Some call it hubris. Let’s make it real simple. Celebrity Democrats are full of themselves. They think they know what we need better than we do and they will give it to us whether we want it or not. They will take away our president, our money and yes, our doctors if given half a chance while they offer soothing reassurance that it’s all for the best because they say it is.

Lucky for us this is more about talking than acting.

Too hot to handle?

Nancy Pelosi (D-CA) exemplifies the collective pride of her House:

Our Members will accelerate a drumbeat across the nation. We will own August and make it too hot to handle for the Senate not to take up our bills!3

Did the speaker forget the August recess?

She betrays her false pride:

This week, we mark the first 200 days of our transformative Majority and celebrate the extraordinary progress we have forged.4

There is no extraordinary progress. The only progress is a big pile of Democratic House bills to toss on the legislative rubbish heap and a lot of false pride we had to put up with because it’s easy for the speaker to get in our face from her congressional bully pulpit.

Pelosi and her party are so blinded by pride that they don’t see this. What’s worse is that they think we the people are too stupid and helpless to notice that their arrogance and far left policy choices halt all progress on Capitol Hill.

If I remember my Milton, pride was a stumbling block for you know who. Democrats will trip over it too. Just sit back and wait for the crash.

Deception: the devil is in the words

Democratic Party politicians don’t lie, mislead, obfuscate, or deceive. The problem is those of us who oppose a liberal socialist takeover.

When you have the public’s attention and tell people what they want to hear deception isn’t all that difficult. Those who disagree don’t listen anyway, so that makes Americans who do pay attention sitting ducks for deception.

Lofty words are a red flag for deception. They make it easy for lawmakers to base bills we won’t read on remarks like this from the New Democratic Coalition Climate Change Task Force:

The climate crisis is the existential and moral issue of our time.5

Wrong. There is nothing existential about it. There is no public choice. Lawmakers call the shots. A Democratic majority will shove what they want down our throats the moment they have a chance, just like they did with Obamacare.

Deception is all black and white

He has Rasputinesque control over Israel’s Prime Minister:

It seems that it is not enough for President Donald Trump to fan the flames of racism, xenophobia, and islamophobia here at home. Now, he seeks to sow division in Israel. The President’s meddling in Israel’s affairs, and Prime Minister Benjamin Netanyahu’s acquiescence, is both a grave error and a missed opportunity that will have consequences for the future.6/sup>

That’s a tremendous insult to Israel as well, but in far left Democratic America Israel is already on shaky ground.

Devil is in the deception: the case for Chicago

The Congressional Black Caucus quoted the NAACP to lay responsibility for gun violence at Trump’s feet:

What President Trump refuses to acknowledge is that the racist, white supremacist and xenophobic language he spews has created an increase in racially motivated acts of violence,” the organization [NAACP] said in a statement. “This coupled with the all-too-easy access to guns has created a violent and tragic fate for this country.”7

It’s disgraceful that the inaction of Trump and his Senate allies continues to allow attacks on American citizens. With his words and actions, Trump’s legacy will be one of hate, prejudice and violence.8

Then he said this:

That won’t stop me from keeping Americans safe from gun violence.9

Let’s ignore the pride behind these words and have a look at Chicago instead.

Democrats rule Chicago with an iron fist. They can pass any legislation they choose and muster any resources they desire. The city still manifests appalling gun violence.

Numbers reported by the Chicago Tribune show 1,692 shooting victims in the city as of August 12, 2019.10 Slice, dice, reinterpret, and justify this number any way you want. Cities and states proved they can block federal immigration enforcement. Why are gun laws different and why can’t Democrats in Chicago stop the violence when Trump is said to have the ability to stop shootings nationwide?

The devil goes after Israel

Democrats back Tlaib and Omar, call our ally “weak”

Deception is also at play in this nasty snippet from Speaker Pelosi:

Pelosi and her party don’t question why it’s OK to encourage boycotts of Trump visits to American cities and not OK for a sovereign nation to say no to visits from U.S. politicians who are known for promoting anti-Semitic, anti-Israel policies.

It’s also incredibly divisive, which is where the devil in the Democrats scores big.

Division: a nation divided is a liberal feeding frenzy

The Democratic Party’s America is all about us and them: rich vs. poor, black and brown vs. white, Wall Street vs. the working class, LGBTQ Americans vs. everyone who is not.

The party spreads division by any means possible. In service to “healing our nation,”12 attack Squad member Ayanna Pressley (D-OH) called the president:

This is how Democrats heal our divisions.

They also divide us with public statements like this from the Congressional Tri-Caucus:

Sadly, President Trump has shown he is incapable of accepting responsibility for the rise in hate crimes over the past four years. However, that will not stop the Tri-Caucus from demanding the President lead and protect every American – no matter their race, religion, or the color of their skin.14

Democrats never demanded responsibility from Obama. They waited until they had someone better to blame.

Is division better than impeachment?

It’s difficult to understand what good comes from impeachment when Democrats have struck satanic gold with Donald Trump. They have used this opportunity to seethe with pride, deceive the public, and divide the nation.

When Democrats dispense with Trump is the plan to get rid of Pence next, so Pelosi can sit in the Oval Office?

That’s a possibility too horrifying to contemplate. It’s something I’m sure the devil would find very amusing.

At lease Wisconsin Congresswoman Gwen Moore is honest when she posts this statement about our collective American soul on her congressional website:

For the sake of the soul of our country, we must come together to restore our national dignity that has been robbed by Donald Trump’s presence in the White House. I implore my Republican friends to work with us within our capacity as elected officials to remove this man as our commander-in-chief and help us move forward from this dark period in our nation’s history.16

How about it? Are you ready to sell America’s soul to a prideful, deceptive, divisive Democratic Party?

2. “Fixing Our Broken Political System and Returning to a Government Of, By and For the People.” A Better Deal. https://abetterdeal.democraticleader.gov/the-proposals/better-deal-for-our-democracy/, retrieved August 13, 2019.

Edited for clarity after original publish date of August 18, 2019.