Two recent events raise questions about what an attack on Americans means. How should we respond when foreigners accost us on our own soil? The answer is that it depends on who the foreigners are and how much political value they have.

What we learned is that foreigners from south of the border can do pretty much what they want. Politicians who make the rules will bend over backwards to accommodate them. Despite popular liberal, pro-Muslim sentiment, when foreigners come from a nation like Turkey all bets are off.

What do SB 4 and the Turkish Embassy have in common?

On Memorial Day there was a melee at the Texas Capitol over sanctuary-busting Senate Bill 4. On May 16, 2017 there was an attack on Americans protesting at the Turkish Embassy in Washington, D.C. What the two incidents have in common is how foreigners regard our First Amendment. Free speech protects illegals. No such luck for Americans demonstrating at the embassy. They were attacked by Turkish security personnel who showed they have very different ideas on what free speech means.

Surprisingly, the silver lining came from the embassy incident. It proves that left and right can join hands when our citizens are threatened. 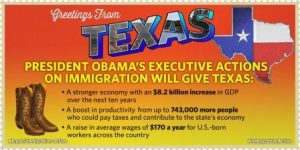 Obama is out
Attack on Americans is still in
Courtesy ObamaWhiteHouseArchives.gov

SB 4: sanctuaries are an attack on Americans

Obama-era policy called for suing states that make life difficult for foreigners who sneak in. Now law enforcement is popular again and SB 4 seeks to restore the balance of state and federal immigration enforcement.

Congressman Joaquin Castro (D-TX) called SB 4 “morally wrong” because it permits “profiling people based on their ethnicity and birthplace.”1 He accused his state’s government of fear mongering. On a national scale the sheer number of protesters stirred up by the Democratic Party can also be blamed for creating fear, especially when public officials issue threats about the growing number of Latino residents and the consequences of not giving them what they want.

Representative Filemon Vela (D-TX) was equally frank about who he thinks should be protected:

Instead of turning to local law enforcement in times of peril, mixed status families and noncitizens may now withhold important information when reporting crimes, or stop reporting crimes at all, out of fear of deportation.2

The Texas Tribune reported that protests during a legislative session over SB 4 included a Republican lawmaker threatening to summon ICE.3 The shocking part of the story is that foreigners are gaining the power to call the shots. They use our First Amendment rights against us and their protest is protected even when their presence breaks the law.

Instead of confronting this very real threat, politicians who spent the Obama years pushing amnesty are wasting time on a story about foreigners concocted by Hillary Clinton and her party to explain why she isn’t president. We could call this an attack on Americans, too. Democrats are trying to deny the people our lawfully elected president, but what happened at the Turkish Embassy makes for a better example.

Attacking Americans and the First Amendment forces us to agree

We should commend a surprising display of bipartisanship on Capitol Hill after the attack on Americans outside the Turkish ambassador’s residence. Even California Republicans and Democrats agree that attacking our people on our own turf is a bad thing. Republican Dana Rohrabacher called the attack “ghoulish and fascistic” and released this comment:

Perhaps such an incident would not be so offensive except that this fits a pattern of broader political violence and brutal suppression that have come to characterize the current Turkish government, both at home and abroad.4

Representative Zoe Lofgren (D-CA) wasn’t happy about the attack on Americans, either. She talked about an “open assault on our collective First Amendment rights” and demanded:

“Yesterday’s attackers should be arrested immediately and prosecuted to the fullest extent of the law. And if Erdogan bodyguards who participated in this attack have entered the country on diplomatic visas, those visas should be revoked right away.5

Introduced by California Republican Edward Royce, H.Res.354 Condemning the violence against peaceful protesters outside the Turkish Ambassador’s residence on May 16, 2017, and calling for the perpetrators to be brought to justice and measures to be taken to prevent similar incidents in the future is a legislative victory not too many of us have heard of. The details are available at Congress.gov.

The resolution hasn’t passed yet, but it offers the faintest shimmer of hope that when Americans are threatened Congress will step up, set partisan differences aside, and do the right thing. 17 Democrats and 16 Republicans have signed on. The Senate version of the bill, S.Res.180, was introduced by Rep. Edward Markey (D-MA) on May 25, 2017.6

Two attacks on Americans: what is the difference?

What joins these incidents is the First Amendment, how it protects free speech rights, and how we choose to enforce that protection.

Illegal immigration is an attack on Americans. It has vast economic and political consequences and raises enormous public safety concerns. Nevertheless, when illegals protest their speech is protected. The incident at the embassy was isolated and unusual, but it brought Republicans and Democrats together while immigration creates an enormous partisan chasm.

What is the difference?

Politicians can agree over violence towards Americans at the hands of a nation with little political value in the U.S. When it comes to dealing with foreigners with real political power, appeasement and accommodation get votes.

The question no one is asking is why we don’t regard attacks on Americans by criminal immigrants, including identify theft, with the same angry response as the embassy attack. Preventing this kind of violence is what the anti-sanctuary movement is about. It has nothing to do with the First Amendment, but it has everything to do with protecting our people.

Why are Democrats so opposed?

UPDATE June 2, 2017: an attack that draws the line on free speech

When I finished this post I realized I left out the most recent attack on Americans. Celebrities in the entertainment industry have not been shy about their hatred for our president and deplorables like me who voted for him. Stephen Colbert kept his late-night gig after his anti-gay, anti-Trump slur. That one blew over pretty quickly. Not so with Kathy Griffin, a comedian I knew nothing about until she decided the nation wanted to see her holding the bloodied head of our president. Her obvious hate for Donald Trump aside, I have to wonder if there was a hefty dose of liberal Islamophobia heaped on top.

Don’t mistake the big names who came down on Griffin as disagreement with what she did. Think of it as the left getting caught with its pants down and not liking the potential backlash and loss of income for the big mouths in Hollywood.