After a particularly nasty midterm election and the arrogant rise to power of far left Democrats we don’t need to be reminded how divisive trendy political imperatives can be, whether they come from New York-style socialism, half-baked California craziness, or Oregon insanity.

We should be wise enough to agree that it’s the height of arrogance for people we elect to tell us what we want and what we should have. Politicians have their own shared values. It helps justify the promises they know they can’t keep. Their goals are very different from the people they label “all Americans.”

Do all Americans have the same needs and wants? Do they even exist outside of political speak? 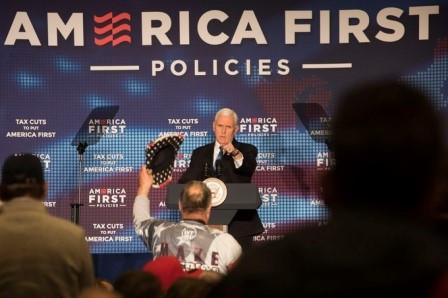 Don’t confuse political priorities like Medicare for All or free college with shared values. The former vanish with the changing of the guard and the up and down of the economy. Values that matter are enduring. They focus on ideas much greater than what to spend on next.

Instead of sharing what’s important to the nation, House Democrats opt for a fight:

Fighting – I love that word. For – A very positive word. All – Americans, All Americans.2

Positive for everyone? We know “all Americans” doesn’t include millionaires, billionaires, corporate CEOs, financial industry gurus, or even white males.

So who is she talking about?

It’s not difficult to come up with values we can agree on, like equality of opportunity. Even Democrats buy into that.

Individualism, free will, and our unique work ethic trespass into a gray area. So does competition. This used to be a value, not something to suppress and criticize because it comes from corporations that create jobs and wealth.

It’s difficult to reconcile competition with policies that make sure no one loses out and that those who win have their wings clipped, but that’s exactly what the new House has in mind.

When the easiest and safest route for all Americans is the one the government chooses we are dangerously close to social engineering.

Is that what Pelosi’s “all Americans” want?

Social engineering: the right and the left

No politician in his or her right mind will admit to social engineering. They call it other things, like making the economy work for everyone or leveling the playing field:

We are examining ways to help level the economic playing field, reform the tax code to lift up all Americans, and reset the economy to reflect our core values of fairness and prosperity.3

Does ‘reset the economy’ sound threatening? It should. A free enterprise economy doesn’t need the government to do a reset.

Leveling the economic field is not a value

Rep. Sheila Jackson Lee (D-TX) brought all Americans together in support of Nancy Pelosi’s bid to reclaim her post:

With Nancy Pelosi at the table, House Democrats give themselves the best chance to deliver on the promises we have made to all Americans to get the job done.4

Rep. Lee is a Democrat. It’s safe to assume that these are only promises to some and not all Americans:

With her negotiating skills in that room we are best positioned to succeed in lowering health care costs and prescription drug prices, raising incomes, end corruption, reforming the criminal justice system, preserving the environment, protecting voting rights, reducing gun violence, expanding educational and economic opportunity, passing comprehensive immigration reform, conducting meaningful oversight of the Executive Branch, and restoring the public’s confidence that their government is on their side.5

Should your tax dollars buy this Democratic Party platform for all Americans? If you believe possible presidential wannabe Senator Elizabeth Warren (D-MA), they should. Not only that, America is a lot worse off than any of us could have guessed.

Warren: wealth and authoritarianism are the culprits

In a speech at American University that sounded suspiciously like a State of the Union address Warren warned that “democracy is under assault,”6 authoritarianism is flourishing, and America is failing:

Our country is in a moment of crisis decades in the making, a moment in which America’s middle class has been hollowed out, working people have been betrayed, and democracy itself is under threat.7

Betraying working people with a better life just over the horizon is stock in trade for Warren’s party. It’s how the senator and her ilk stay in office, but according to Warren the real problem is that the wealthy thrive on authoritarianism and corruption, and:

he [Trump] is aided and abetted every step of the way by Republican politicians in Washington too pleased with his judicial appointments and tax cuts for the wealthy to stand up for fundamental American values. 8

She never defines what she means by “American values.” We should give Warren credit for not using the “all Americans” label when she attacks success, the goal of hard work and overcoming competition. Her words come straight from an ideology that understands there is only so much money to go around and the only way for government to make all Americans successful is to take from some and give to others.

That is not an endorsement of true American values. It’s advocating socialism.

The offensive part of this isn’t the idea of redistributing wealth. It’s that Democrats believe they should decide what we need to live a good American life. This is antithetical to a conservative ideal that calls for:

Solutions that empower all Americans – no matter who you are or where you come from – because government should not limit where you finish because of where you started.9

This GOP maxim won’t work for everyone. Conservative ideals don’t guarantee that everyone in America will succeed and prosper. They do offer a greater chance to live lives that aren’t moderated by government, which stands in stark contrast to what the extremist wing of the Democratic Party has in store for all Americans.

There is a tremendous difference between temporary political values and enduring American values. One is real, the other is just so much smoke and mirrors until Americans finally forget once and for all who we are and what we have such a unique opportunity to be without interference from an authoritarian government.

Democrats blame Trump for authoritarianism, but isn’t that what they want for all Americans?