President Trump created another firestorm over what he did or didn’t say about rocks and rifles and border troops. On one side our commander-in-chief is determined to prevent a flood of Latin American nationals from entering the country on their own terms. On the other we have Democrats like Rep. Joe Kennedy (D-MA) who recite the party line and insist that the newest horde consists of people desperate for help:

The caravan in President Trump’s crosshairs today is not a battalion of armed invaders. It is a group of thus far peaceful migrants, countless children and families among them, walking across Central America with torn clothes, bloody feet and empty stomachs because what they left behind is so much worse.1

Ironically, Kennedy also complains that the situation at the border is:

costing our taxpayers untold dollars and these children untold trauma.2

Both of these problems could have been avoided if the migrants who already arrived were turned back. That kind of thinking is anathema to Democrats, including members of the House Armed Services Committee who declare that asylum-seeking is a right:

The caravan of people that the President is focused on are coming to seek asylum, and they have a lawful right to do so.3

If the caravan isn’t composed entirely of thousands of asylum-seeking women, children, and honorable men looking for work, what’s the plan when things get ugly?

That’s a problem for Trump to solve and for troops and the Border Patrol to worry about. 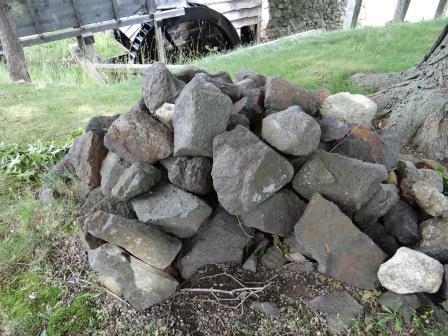 When asked whether he could conceive of military personnel firing at migrants throwing rocks, the president commented:

I hope not. It’s the military — I hope — I hope there won’t be that. But I will tell you this: Anybody throwing stones, rocks — like they did to Mexico and the Mexican military, Mexican police, where they badly hurt police and soldiers of Mexico — we will consider that a firearm. Because there’s not much difference, where you get hit in the face with a rock — which, as you know, it was very violent a few days ago — very, very violent — that break-in.4

It’s never happened to me, but I imagine that getting hit in the head with a rock is a bad thing. Whether it’s worse than getting shot is up grabs. A lot depends on the size of the rock and where the bullet hits you.

Just because you are part of the military or work for the Border Patrol doesn’t mean you are immune to what a rock can do:

Just a few weeks ago, an agent in San Diego was patrolling the border on an all-terrain vehicle when he was struck in the chest by a grapefruit-sized rock causing him to lose control of his ATV, which subsequently rolled over him.5

This isn’t a new problem, but it’s one we have never faced from people threatening to arrive by the thousands and a political party that insists we have no choice but to give in to their demands

Rock throwing at the border? We’ve been here before.

It may surprise you that rock throwing attacks at the border are not anything new. Back in 2011 Congressman Ted Poe (R-TX) recounted a talk he had with a Border Patrol agent who told him:

Things haven’t improved since then. Testimony in 2018 before the House Homeland Security Committee revealed:

It is dangerous work. Made more dangerous because agents are subject to frequent assaults – some of them have the potential to kill or cause grave bodily harm.7

Even without thousands more adding to the pressure at the border, the problem is escalating:

Unfortunately, such assaults are becoming more commonplace in part because of the increase in the number of criminal aliens attempting to cross the border illegally who would rather resist arrest than face jail time for parole violations, or a felony reentry charge.8

There’s a big difference between facing angry rock throwers and sitting in Washington passing judgment. The question that’s going to come up is whether any use of force is justified.

Mexico says no to tear gas

In 2008 we responded with tear gas and learned that if there are violent conflicts we have more than Capitol Hill Democrats to deal with:

After the most recent tear gas episode, the Mexican Government sent a self-righteous statement to the United States that said, even though “these incidents are a response to hostile acts against Border Patrol agents by Mexican citizens, the actions by U.S. authorities are unacceptable.”9

We can safely assume that the congressional left feels more simpatico with the Mexican government that they do with Donald Trump. If they have their way with what happens at the border we are already hearings signs that the plan won’t be much different from their ideas on policing our cities.

Big city policing the model for force at the border?

By the end of Obama’s second term police shootings were at best unjustified. When race intrudes they are now criminal acts until proven otherwise.

Democrats are still itching to extend their hold over local law enforcement with bills like H.R. 4331:

Rep. [Hank] Johnson once again introduced the Police Accountability Act – H.R. 4331 – that would expand the Department of Justice’s authority to investigate wrongdoing by police by making it a federal crime for police officers to commit murder and manslaughter.10

It’s a lot easier to make decisions about whether an event is murder or manslaughter when your life is not on the line. When a suspect attacks with a knife or a baseball bat, how does an officer justify using an even deadlier weapon, a gun? If lawmakers on the left get their way that will become a federal decision thanks to bills like S.3195. Among other things this Senate legislation calls for a National Law Enforcement Oversight Task Force to reform local police departments.

Since Trump has already been criticized for being racist and anti-immigrant, what will happen if troops at the border at risk of life and limb respond with force against people Democrats insist are non-violent and in need of help with an absolute right to asylum?

The community policing dialogue has already transferred to the Southwest border. Adam Smith (D-WA) accused Trump of exploiting the newest caravan and joined fellow Democrats who demanded to know:

Have any troops been instructed or trained on how to interact or engage in any way with individuals in the caravan? If so, what is the nature of the expected interaction and what training have these troops received for these interactions?11

This echoed demands made of local police departments:

Estimates of the number of people headed for the border have ballooned to 10,000. That won’t leave a lot of room to finesse “expected interactions.” What you can be sure of is that a violent confrontation will play into Democratic hands as perfectly as an urban police shooting. It will be about race, about alternatives to deadly force, about murder and manslaughter. That’s a big problem for our troops because it’s very difficult to convincingly argue that a rock is as deadly as a gun unless you’re the one whose head is in the way.

UPDATE November 27, 2018: tear gas is what migrants and Democrats wanted

As in the past, migrants angry at the situation at the border directed their anger at CBP officers trying to keep the peace:

This morning, CBP was forced to close the San Ysidro Port of Entry to ensure public safety in response to large numbers of migrants seeking to enter the U.S. illegally. After being prevented from entering the Port of Entry, some of these migrants attempted to breach legacy fence infrastructure along the border and sought to harm CBP personnel by throwing projectiles at them.13

That was from Homeland Security Secretary Nielsen.

This was from Oregon Democrat Earl Blumenauer:

In the last six months, Donald Trump has defended murder, befriended dictators, and put children in cages. Add the tear-gassing of migrants seeking asylum to the despicable human rights record of this administration. It’s reprehensible.14

… and from Colorado’s Diana DeGette, who appears to be blaming the border patrol agents, Homeland Security, or both:

The actions by the Trump Administration and by federal agents along the border near San Diego are shocking and alarming. Any professional organization should be able to tell the difference between threatening crowds and unarmed men, women, and children seeking asylum and respond accordingly.15

Migrants got the backing they wanted from members of our government.

7. “On the Line: Border Security from an Agent and Officer Perspective.” Statement of Subcommittee Chairwoman Martha McSally (R-AZ). Op. cit.