Are white supremacy and police shootings a national scourge or a symptom of unethical politics? The rapidly growing liberal obsession with white supremacy seems like a completely different issue from the occasional police shooting that carried the Democratic Party through the end of the Obama administration. Rest assured they are one and the same.

Whether or not a police shooting is racially-motivated is up to the courts, not the Democratic Party, but any good politician knows that it’s hard to change minds after they are made up. It’s best to get in front of these types of incidents with a rush to judgment and trial by media. Until this summer that’s been the plan despite some disturbing numbers about how dangerous policing can be.

From 2015 to 2016 there was a 61% increase in police officers killed in the line of duty. 17 were killed during an ambush.2 There hasn’t been a lot of press about this because politics found better opportunities elsewhere.

What does politics want as this summer draws to a close? The nation has a short attention span. The occasional police shooting is hard to turn into a national trend. The use of force doesn’t play as fresh as it once did, so Democrats found a substitute. Their solution is white supremacy. 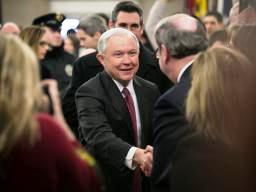 You thought dumping Steve Bannon would end the Trump White House’s alleged white supremacy problem? After Democrats called for Trump’s censure3 they got their way with Bannon. The rhetoric got stronger. The Democratic mission to exploit racial differences turned to fear-mongering. This warning is from Illinois Rep. Raja Krishnamoorthi:

I am calling on Attorney General Jeff Sessions, as our nation’s top law enforcement officer, to fulfill his responsibility to protect the public by devoting all necessary resources to combat the threats posed by white supremacists and other hate groups.4

One person died in Charlottesville. That was enough to turn America into a stronghold for white supremacy. There are calls for urgent action from the Department of Justice and Homeland Security:

“It is imperative that the federal government use every constitutionally available tool to safeguard all of our citizens against the threats posed by white supremacists, neo-Nazis, the KKK, and other such organizations,” [Colorado Rep. Diana] DeGette wrote. “I respectfully request your [AG Sessions] prompt response in this matter.”5

It’s safer to voice outrageous opinions from cities and states than from Washington. California’s Senate President Pro Tempore Kevin De Leon alleges that Trump administration decisions on how to enforce the law are guided by white supremacy.6 Here in Illinois Chicago Mayor Rahm Emanuel remains defiant while shootings within the African American community take the lives of children and police struggle to contain the violence.

As fall politics gets underway in Washington denouncing hate, white supremacy, the KKK, and Nazism will be all the rage. Right-wing extremism plays perfectly into the hands of left-wing strategists because these things are so fundamentally reviled. Republicans will buy into the same exaggerated rhetoric that will be used against them next year no matter what they do or say.

Democrats are no dummies. This is what they excel at. They know that the truth can be created by the opportunity of the moment. Lucky for them they just found that opportunity in Virginia.

Even before he won the presidency Democrats worked hard to blame Donald Trump for an alleged surge in hatred and intolerance that they can’t prove because the FBI’s numbers for 2016 aren’t out yet. We do have the 2015 hate crime numbers released in November 2016 that showed a slight increase. Democrats didn’t blame Obama. Instead, they called it a trend and tried to use it against Trump.

Last week House Democrats continued their crusade to create a white supremacy problem. They sent a letter to Paul Ryan and proposed a House Resolution to create a Select Committee on White Supremacy, Nazism, and Domestic Terror Movements. Rep. Joe Crowley tied it to Charlottesville, probably because they didn’t have much else to use against us:

The violence in Charlottesville, including the tragic murder of Heather Heyer, is a symptom of a larger epidemic of threats of violence and hate against minorities and immigrations [sic] nationwide. These violent views have found footing in the mainstream and seen a significant growth in interest in tandem with the election of President Trump.7

It’s easy to charge an alarming increase when data for 2016 and 2017 is not available. That’s the best thing about propaganda. It doesn’t require facts.

Americans are fundamentally good people. Aberrant political rhetoric and politicians who find benefit in convincing us that we are teetering on the brink of becoming a nation of Nazis are what we should beware.

7. “Democrats Call on Speaker Ryan to Establish a Select Committee on the Rise of White Supremacy and Domestic Terrorism.” The House Democrats. September 7, 2017. http://www.dems.gov/democrats-call-speaker-ryan-establish-select-committee-rise-white-supremacy-domestic-terrorism/, retrieved September 10, 2017.