Everyone in America saw what happened the day 410 ILCS 705/ became law. Long lines trailed down streets leading up to Illinois’ legal weed dispensaries under siege by too many eager New Year’s Day customers. We heard about too-long waits, enormous crowds, and incredible enthusiasm over being able to purchase something people in most states still go to jail for. This is where the unethical business of state-sponsored drug dealing in Illinois began.

I drove past a dispensary last weekend to have a look at the excitement. The traffic started long before I even got close. There was no parking in sight, just an endless stream of circling cars in an industrial park on a Saturday afternoon. There were plenty of police too, which makes sense. This is a cash-only business. The staggering number of people in line all had to bring lots of paper money to pay the high price and even higher taxes Illinois demands from those who want to enjoy this now legal, illegal treat.

Legal weed will be big business in Illinois. Does this make it an ethical business in a state where ethics in government is practically unknown and corruption is another source of income for too many public officials?

Thousands standing in the cold are the product of an unethical business model. The kind of take advantage policymaking that created the Cannabis Regulation and Tax Act is not something we’re unaccustomed to. We chose a similar path with the lottery. Sports betting was passed in May 2019 alongside 410 ILCS 705/. Gambling will expand even further when Springfield finally gives in to the casino Chicago Mayor Lori Lightfoot is pushing for.

So why is this an unethical business? Because it takes advantage of people to make a buck. 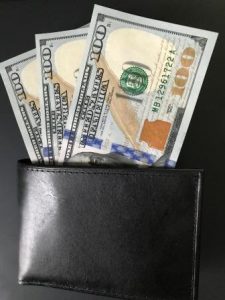 Democrats increasingly show a lack of understanding of just how free market economics works. This time they are on to something, but they bungled the details.

It’s old news that legal weed is big business. It’s going to get a lot bigger as more states take the plunge and convert marijuana from a ticket to jail to a revenue stream.

That’s not to say that the companies supplying dispensaries in Illinois are unethical businesses. They are doing what Springfield lawmakers asked them to do: sell pot. Lots and lots of pot. So much, in fact, that as WGN9 News reports what they’ve grown is pretty well gone.2 Once the high of the first few days of legalization wore off pot smokers were faced with the harsh reality that there is very little weed left for anyone except medical card holders who also worry that the supply is in jeopardy.

That’s a bad thing for state bean counters. It’s a very good thing for a black market that shouldn’t have a very difficult time holding an advantage on pricing and availability. The illegal market doesn’t have to follow tax laws, supply constraints, federal legal blockades like crossing state lines for more pot, or any other regulations other than simple free market supply and demand. The state has an incentive to keep prices high because inflated receipts at dispensaries means more tax dollars. While many argue that the market will stabilize and prices will come down, I suspect both sellers and lawmakers will be loath to see the kind of glutted market and low prices that exist in other states that have legalized marijuana.

The Illinois Cannabis Resource site reminds us that this is all about responsibility and not doing dumb things like eating too many edibles and risking “marijuana poisoning.”3 Those of us who were earning our degrees in the 1970s and 1980s never heard of such a thing. We would have laughed at the suggestion, but as we are reminded this is a different drug, a product of corporate genius. Genetics and chemistry are playgrounds with no boundaries when there is profit and tax revenue to be made.

As THC content goes up so do taxes, profits, and adverse effects. Thank corporate America, something Democrats like to scoff at for everything but tax revenue for creating problems with a drug that used to be viewed as pretty benign compared to its illegal competitors. Now we have government incentives to push the envelope. The big business of legal marijuana will be more than happy to comply.

Few Illinoisans intent on purchasing legal weed from their nearest dispensary – and that could be quite a trek because of the state’s counterproductive, anger-inducing licensing scheme coupled with municipalities saying no to pot sales – will need to worry about the caution on the state’s website. They aren’t going to be purchasing anything in any quantity that will hurt them, at least not for a while.

That’s another side to Springfield’s unethical business model. Consumers had seven months to get excited. Now the product is in short supply, snapped up as soon as it hits dispensary shelves. That’s an incentive for buyers to turn a blind eye to ridiculous prices and even more ridiculous taxes with the hope that the market will settle down and become accessible to those without a six-figure income or a neighborhood dealer.

Legal weed, gambling, and corruption: making a buck in Illinois

The unethical business of taking advantage

The Illinois Lottery claims that gambling profits go to “public education.”4 That’s a deception that only makes sense in a state where paying for teacher retirements takes precedence over public education.

According to the Illinois Policy Institute, lottery profits go to pensions, not kids.5 If you buy a lottery ticket thinking you are helping to put children through school what you are really doing is sending their retired teachers to the Florida beaches. Worse yet, some Americans believe that playing the lottery is also a sound method of investing for retirement. We can hardly blame them. Lottery advertising makes this seem like a viable get rich quick scheme for suckers who don’t know any better.

This sort of revenue collection scam has gone on for so long that we don’t even pay attention any more. Do consumers eager for a pot pass from law enforcement understand the tax structure? They will when they pay their bill. It’s not as if the state wasn’t transparent about the tax rate when they passed the legal weed act, but in the short term the enthusiasm over this legal illegal drug will overshadow how much profit the state plans to extract from this particular vice.

Illinois legal weed legislation is obsessed with social equity. The bullet point summary of the Cannabis Act instantly raises a question about how this will work in practice. How many people in the depressed neighborhoods the act wants to ensure get a fair shake of pot commerce have the money to purchase legal pot when the state is done tacking on taxes? If they do manage to scrape up the cash, is state-sponsored marijuana where it should go, or should it be spent on Illinois lottery tickets or at a casino?

Social equity lawmakers should also remember that those who do have cash probably don’t want to set foot in some of the neighborhoods that need the commerce. Even the search for legal weed has limits.

State-sponsored marijuana is also a social justice maneuver. Governor Pritzker already pardoned 11,000 who had minor marijuana infractions on the books. That’s a drop in the bucket compared to what WQAD8 reports are over 800,000 records expected to cancelled in the years to come.6 That will inevitably take lots of time, money, and government workers.

We also need a better way to test for marijuana-induced impaired driving. The technology isn’t there yet. The issue raises a very troubling question because of the length of time the drug is detectable in a user’s system. If you have any amount of THC in your body and are involved in a fatal crash, when the case goes to court and the jury hears about it will it be held against you even if you have not used legal weed for many days or even weeks? Will insurance companies cover an accident if there is even the slightest trace of THC in your system, or will they use this as an excuse to say no?

We are already hearing about a spike in emergency room visits and will certainly hear about kids eating candylike products meant for adults. If we can’t keep children away from guns, how do we keep them away from chocolates and gummies laced with pot when parents may be too impaired and forgetful to hide their stash?

Dispensary licenses, growing permits, and tax collection mean lots of money will be passed around as legal weed expands in the state. Illinois has a sad history of corrupt public officials making a little extra on the side. This is another wonderful opportunity, especially in the early days as permits are being issued and we’re still hammering out the various ways this new law will manifest.

In the end this is all just a government tradeoff for the sake of badly needed tax money, which is another problem created by state lawmakers and their spending habits. Taxpayers bear the weight of that bad habit just as we will pay the cost of whatever problems this new revenue stream creates whether that means auto accidents, ER visits, or more government corruption. For the time being there is enough excitement over early sales figures to cover for what’s been done. This is a prime example of how money takes precedence over responsible public policy.

The state could have decriminalized marijuana, even expunged criminal records without legalizing another intoxicating substance. It didn’t choose to do that. Illinois needs money, lots of money, and that means lots and lots of pot no matter what the real cost is because in this state tax dollars decide what’s ethical and what is not.

While Chicago remains conflicted over how to make legal weed a social equity vehicle – something Governor Pritzker vowed to do in a May 31, 2019 press release that spoke of “the most equity-centric approach in the nation”7 – the taxpayers the state planned to take advantage of are still trying to figure out how to get their hands on the state’s newest overtaxed revenue producer.

Pritzkers’ press releases are chock full of buzzwords meant to resonate with his target audience. To that end, legal weed was predicted to have a “transformational impact”8 on the state. If news reports and anecdotal accounts of what happens when residents arrive at dispensaries are even half true, the only transformational impact legal weed is going to have for the foreseeable future is for the guy down the street who must be laughing at the state’s plan to fleece recreational pot smokers.

Last week, an Illinois Policy Institute article reported that we already have some of the highest pot prices in the nation.9 The state demands a premium for almost every aspect of living and breathing in Illinois. We boasted one of the highest get out of dodge rates in the U.S. for the past decade. It should not surprise anyone that the fairness and social equity jargon was just a cover for the unethical business of taxing drug users and telling them it’s all in the name of doing the right thing.

It would have made more sense to the take the IRS approach and issue tax stamps to the black market suppliers who will inevitably reap the benefits of Illinois’ plan for transforming the state with marijuana. The only dope that we seem to have an excess of at the moment is the taxpayer who chooses to wait in line in the cold for hours on end to spend too much money on legal weed or worse, be told that there is nothing to buy.