Keeping the streets safe is becoming impossible because of cowardly Democratic politics that bows to activists to keep the votes coming in. If we can’t tolerate police using force against criminals of color, then we should stop policing communities where race is more important than the law.

Ridiculous and racist, you say?

The newest crisis involving Chicago police is another example of inequality between law enforcement and offenders. Three officers were relieved of their duties with little explanation after shooting a suspect in a stolen car that struck their squad cars.* The officers now face legal action, as the Sun Times reports.1

Offenders of color who wind up dead are being held to a different standard regardless of what preceded the shooting. That makes policing a high-risk occupation because hindsight will always raise questions about the split second decisions officers are forced to make.

Since activists and Democrats are already dictating the terms under which public servants do their duty, perhaps it is time to stop policing high risk communities. Should we ask agitators and politicians to patrol the streets and keep people safe? 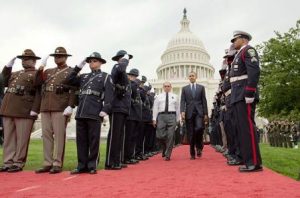 One community? Not on your life.

Today, we are standing here together as one community to share our love for these fallen heroes. We are joined by our collective heartache, our common humanity and our shared commitment to the hopeful future that has always been this nation’s guiding star. And in the face of division, we are united not by hate, but by love for those whom we lost; love for those here with us today; and love for the community that joins us still.2

One community is not what Lynch and predecessor Eric Holder helped Obama create. We have two communities now. The important one is composed of low income black and brown people. The rules of law enforcement for this community are different.

Few of America’s heavily politicized, police-involved shootings involve someone going to church or school or driving to work minding their own business. Typically the law is broken. There is a confrontation with police. The offender is shot. The media takes control. Pols weigh in. The police are blamed to appease and punish.

Instead of recognizing that any confrontation with law enforcement carries risk, especially in crime-ridden neighborhoods where police are on guard, we have adopted a rigorous new set of standards for how police should behave:

1. There is no such thing as a justifiable shooting of a person of color.

2. If an offender of color is shot, whatever crime brought them into contact with the police should be disregarded.

3. Black lives matter most when they aren’t taken by black lives.

4. Split second decisions made by police before a shooting should be scrutinized until they can be found guilty of misconduct. If there is no evidence, they should be found guilty in the court of public opinion.

5. Police are not allowed to fear for their lives or safety, but should conduct themselves to please activists and politicians at any cost.

If you are a cop these are tough rules to live by. Some would say trying to do so is a fool’s errand ending in jail, the hospital, or a cemetery.

Excessive use of force by the police is a longstanding Democratic lament. The following sounds like it came from Obama’s Justice Department, but it is a relic from the Bill Clinton days:

Community disturbances resulting from the police use of excessive or deadly force continue to plague many American communities. Law enforcement is an important societal function and its effectiveness is hampered when tensions exist between the police department and the public it serves.3

Obama has failed to empower the low income minority communities Democrats favor. The federal minimum wage hasn’t budged. Spending on SNAP and other programs only keeps things where they already are. There are other things we can give away, though. Law enforcement and sentencing are under the government’s thumb and are easy to manipulate.

There will never be a level playing field for the police because the law means different things in different communities. Crimes in communities of color, including the murders of children, are increasingly met with resigned acceptance instead of the nationwide outrage we see when a cop shoots a black suspect. The government insists on scrupulous investigation of possible civil rights violations, but the rush to judgment in officer involved shootings sets the legal process aside in favor of politics and public opinion.

Officer Friendly may well end up dead building trust in the worst neighborhoods of Chicago, Detroit, or Oakland. Not all politicians understand.

The fact is that black men are more likely to die at the hands of police than white men, and our communities and constituents demand action.4

One day later Duckworth had this to say about the officers killed in Dallas:

It [shooting of police officers] will only serve to distract from and undermine the efforts of peaceful protesters seeking an end to the needless violence that took the lives of Alton Sterling and Philando Castile this week.5

She later offered a nod to the families of the murdered men, but we got the point. If I was a cop I’d be asking “Why bother?”

“Escape From New York” is a cult movie from the 1980s that predicted where we are headed with law enforcement. Manhattan was walled off and turned into a giant prison with no guards, no rules, and every man for himself. That’s the situation we are facing in our most dangerous neighborhoods like Chicago’s Englewood and Auburn Gresham. The crime rates are sky high. No one wants to go there. Police don’t have a choice and will be charged with racism and hate for confrontations where the color of a criminal’s skin is more important than the laws they have broken or the threat they pose to others.

We could have the government take over law enforcement to suit its whims. That would be either martial law or in the current climate no law, which probably wouldn’t sit well with anyone.

In lieu of giving away money, is this what Democrats want?

Yesterday’s release of the video of the Paul O’Neal incident in Chicago gave media outlets a chance to turn a suspected car thief into an unarmed black teenager shot by police. Those damning the police were not there at the time and neither were those supporting their actions. That won’t prevent the three officers involved from being tried and convicted long before any charges are brought or legal action taken.

If people committing crimes can figure out how to get shot without getting killed it will be the end of law enforcement in America.