In support of Donald Trump’s second impeachment Congresswoman Alma Adams (D-NC) denounced the whiteness of the Capitol rioters in an Op-Ed posted on her House website:

The mob was able to act on their conspiracy theories because of the armor of their whiteness, which emboldened them to attempt a coup.1

It’s a sign of how far anti-whiteness has progressed in Democrat Party hands that this kind of remark is not only tolerated, but accepted and promoted while the slightest racial innuendo about crimes like last summer’s mass looting is de facto racist and a symptom of white supremacy.

Phrases like “whiteness,” “white culture,”2 “white privilege,” “white supremacy,” and “anti-Blackness” normalize hatred for white people. None of this has any place in America unless you are a congressional Democrat hungry for cash. The radical left is counting on anti-whiteness profits to fund the destruction of our economy. 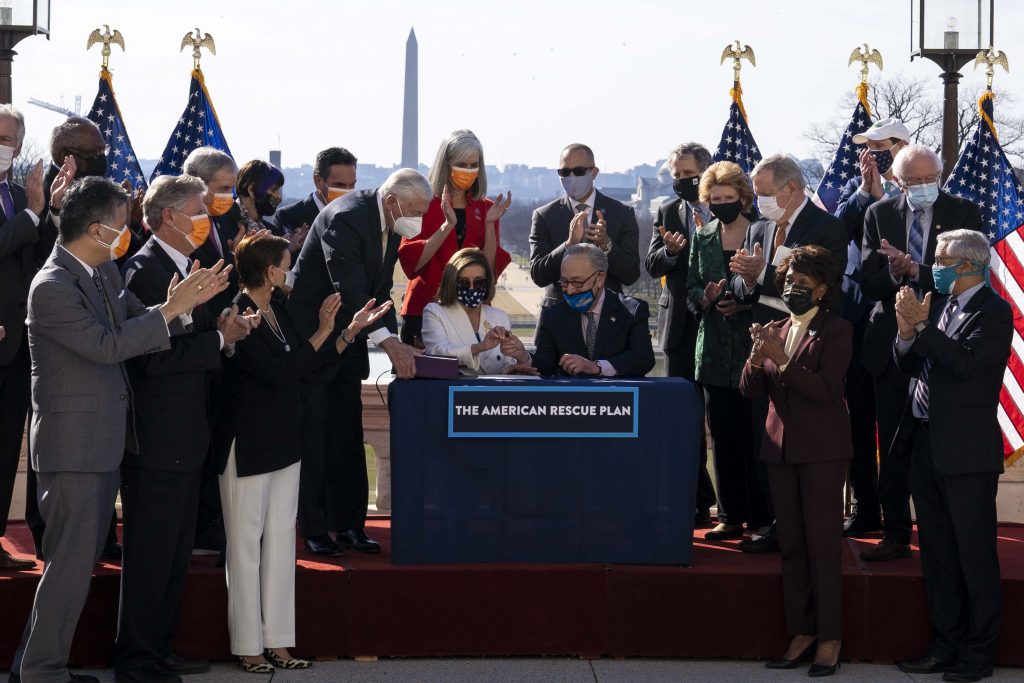 Armor of whose whiteness?
Photo by Senate Democrats*

The belief that “hard work is the key to success”5 is also problematic. According to Hawley:

the position of the Smithsonian, as suggested by the materials prior to their removal, appeared to be even more troubling: that these attributes are actually emblems of “structural racism” in American life to be rejected rather than embraced.6

Did anyone bother to wake Joe Biden and tell him that a plan pushing racial equity jobs might be racist because it endorses the value of work?

“Intent counts”7 was also on the list. The intent of the far left movement to punish America for alleged systemic racism is pretty obvious to anyone who stands back and takes a good look at what’s coming down from our highest levels of government. In fact, the intent is so glaring it can’t stand much longer if for no other reason than sheer numbers. The left denounces Americans who are white and assumes we are racist because it makes good political sense, but we are at least 60% of the nation’s population. That makes white Americans a valuable source of income to fund an agenda that despises us.

Federal underinvestment in communities of color has created systemic disparities that cross nearly every sector. These communities now bear a disproportionately severe burden of the COVID-19 pandemic and economic recession. But at the same time, Wall Street investors and billionaires continue to rake in profits.8

Their statement makes absolutely no sense. The comparison is ridiculous and the personal wealth of many of our federal lawmakers makes any accusation about profits the height of hypocrisy.

What’s important is Murray’s use of economic justice as an opportunity to make people angry about “our nation’s shameful past.”9

Since this bill was proposed progressive lawmakers gained the power to bully the nation into adopting a very expensive agenda while they fan the flames of national disunity. Ironically, if we believe what Democrats say their agenda will be funded by profits from systemic racism and taxes paid by racist white people.

If there is a racist equivalent to blood money then that is what Democrats are drooling over as they rifle through trillions of our tax dollars.

Equity means taking back racist profits with the tax code

In support of a federal commission to develop proposals for African American reparations Congresswoman Sheila Jackson Lee gave numerous examples of how different institutions atone for a history Democrats use to extort revenue for their spending agenda:

Though litigation has yielded only mixed success in court, a serious foundation was laid for alternative forms of restitution. For example, in 2005, J.P. Morgan & Company tried to make amends for its role in the slave trade with an apology and a $5 million, five-year scholarship fund for Black undergraduates in Louisiana.10

These are only a few example [sic] of how private institution [sic] have begun reckoning with their past records. I expect that a growing number of institutions will be forced to examine their histories of discrimination, if for no other reason than increasing public scrutiny will force their history to light.11

“Force” is the operative word. It means being shamed and bullied into handing over money to the left.

Rebuking good people who are not racist for being white and insinuating that they should be blamed for everything wrong in America is about one thing and one thing only: money.

Anti-white, anti-business propaganda is good politics, so good that few question the ethics of relying on the profits of corporations that allegedly feed on systemic racism to fund a radical left political agenda. Why do Democrats want to build their new America with money earned from discriminating against the people they claim they want to raise up?

Radical left officials have anointed themselves dictators of racial propriety. I can’t imagine any lawmaker, mayor, or governor talking about crimes committed by people of color because of the “the armor of their brownness” or “the armor of their blackness,” but when it comes to white Americans the gloves are off. Denouncing white people is too profitable to resist.

Wealth inequality has a payoff

On March 4, 2021 Democrats on the House Ways and Means Committee announced their Racial Equity Initiative:

From addressing health disparities and income inequality for people of color in marginalized communities to reforming our country’s tax code to better support struggling working families, the concept of equity – prioritizing the needs of the most vulnerable and underserved – has played a critical role in guiding our legislative efforts on the House Ways and Means Committee,” said Congressman Jimmy Gomez.12

Like most Democrats Gomez ignores the fact that his party didn’t tell the truth about fixing these health disparities when they forced their ACA through Congress, but it’s his remark about reforming our tax code that counts.

The Democrat Party has a simple fix for systemic racism:

We can’t move forward until we tackle systemic racism in America. Our CBC colleagues reminded us that racism isn’t an issue for Black Americans to fix – it’s incumbent upon white Americans to fix.13

And fix it we will if Democrats and our tax code have anything to say about it.

As with most Biden administration spending the American Jobs Plan is less about America and more about the Democrat Party’s equity plan for social engineering.

Racial equity plays a leading role in this spending bill:

There’s that hard work fly in the ointment again, but no matter. This is about transforming America:

The President’s plan for transportation is not just ambitious in scale, it is designed with equity in mind and to set up America for the future.15

The jobs plan is less of a plan and more a list of progressive talking points:

So who pays for all this?

Democrats told us what they planned to do. Now they are going to do it.

In a January 2021 report “Something Must Change: Inequities in U.S. Policy and Society” they again refused to take any responsibility for our nation’s health policy that they claim “marginalized many American communities.”17

Instead they banged the equity drum:

Our country’s current distribution of income, assets, and wealth reflects a long and persistent history of racial barriers to economic opportunity and upward mobility.18

No surprise this is all about taxes:

Tax policy plays a role in shaping these outcomes. It influences how wealth is earned, accumulated, consumed, and transmitted – and who benefits.19

Members of Congress certainly benefit and in too many cases it’s at our expense. What’s so confounding here is the plan to pay for an agenda that condemns whiteness and systemic racism in our society and yet depends on money from the majority white population. The radical left needs white taxpayers to accomplish their goals but they also demand that we hate ourselves because of something most of us are not guilty of.

This seems like a pretty foolish way to get taxpayers to buy into Biden’s damaging American Jobs Plan. Why are they doing this?

Because now they can.

3“Jayapal Issues Statement Opposing the Continued Use of Curfews, National Guard Troops and Militarized Law Enforcement to Respond to Peaceful Protests in Seattle and Communities Across the Country.” Jayapal.house.gov. June 3, 2020. https://jayapal.house.gov/2020/06/03/jayapal-opposes-curfews-national-guard-militarized-lawenforcement/, retrieved March 31, 2021.