Home » Elections » Power of the People Only Makes Politicians Stronger

How can it be that presidential candidates from both political parties will restore the power of the people after they get control of our government? Each side is accusing the other of denying us the right to self-government. Corporate donations, allowing the executive branch to take over the role of the legislature, and delaying our next Supreme Court justice are just some of the offenses being blamed for denying the power of the people that we like to think our representative government is based on.

With left and right so opposed, how can they both want the same thing?

It depends on what they mean by restoring our power. 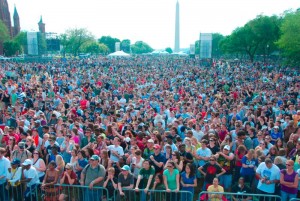 Candidates want to give us power. Why?

Contenders for the Republican nomination are far apart on the issues but they all want to put decision making back in our hands. How? By persuading us to put power in theirs. After all, a power grab is what the election process is all about. If it’s done in the name of defending the people’s right to decide, so much the better. It certainly sounds better than the truth.

Trump talks about winning for the people.1 Cruz calls for limited government but he pushes big government morality. Marco Rubio offers “Policy for You.”2 Their solutions sound suspiciously like top-down government with a conservative twist.

Top-down is what we expect from Democrats. Inexplicably, they also promise bottom-up prosperity. Hillary Clinton wants you to agree that “I’m with her,” 3 a disturbing twist on giving the people a voice.

If you decide to hand your vote to Hillary, shouldn’t she be with you?

Power of the people is democracy by proxy

A presidential election is held only once every four years, unlike Supreme Court decisions. Every year we are faced with new challenges from our high court. Perhaps the biggest blow to the Democratic Party in recent memory, Citizens United was followed by 2014’s McCutcheon v. FEC, explained here on the Federal Election Commission website. This SCOTUS decision eliminated limits on total election contributions by individuals. The RNC was a party to the case and the resulting uproar among Democrats over denying the will of the people was almost as loud as what followed the Citizens ruling. Still, Citizens seems to have struck the harder blow. California Democrat Scott Peters complained last month on the anniversary of the decision:

Citizens United changed the landscape of our elections,” Rep. Peters said. “Ordinary Americans don’t have millions of dollars to spend to support a candidate or special interest, and they don’t have direct access to SuperPACs, that doesn’t mean their votes or priorities should count any less.4

Our votes shouldn’t count for less. They would count for more if we voted. Not participating in elections is our own bad decision. Corporations, unions, and specials interests with money to burn know the value of influence. They care. Politicians on both sides benefit.

As much as they still draw liberal blood, Citizens and McCutcheon are old news. This is 2016. Democrats need money, too. Most liberal voters probably can’t articulate why corporate donations are supposed to be bad and union and other special interest contributions their party thrives on are good. We shouldn’t blame them. There isn’t much difference.

Even Bernie Sanders’ personal balance sheet is far above that of the Middle Americans both parties are eager to return power to. The fact is that only the rich can play in our elections and contributions are everything. Why do you think the first think that pops up on most candidate websites is a demand for money?

Democrats are even guiltier than Republicans when it comes to campaign finance because they refuse to stand by their principles. When was the last time the party nominated a minimum wage earner for president? Sanders is probably as close to a pauper as the party will ever come.

Representative government in America is democracy by proxy. It is convenient to argue that the people don’t have a voice because it explains losses at the ballot box. The fact is we have an opportunity for a bigger voice now than ever because of our access to information. Turning that voice into the power of the people is another matter. That’s where political careers and self-interest throw the whole representative government equation into the trash.

Lots of talk, but our voice goes unanswered

Worried about the way the courts and our president have been managing America’s affairs without the power of the people, Republican Cathy McMorris Rodgers hailed the years that have passed since the GOP took over the House, declaring:

Because when the power of the people – We the People – is returned, every man, woman, and child in this country will have a greater opportunity to pursue their version of the American Dream.5

Just how that opportunity will happen is a little hazy. H.Res, 613, introduced by Rodgers, is more direct in its hyperbole, “Expressing the sense of the House of Representatives regarding the restoration of authority of the American people and the separation of powers.”6

Nevertheless, the resolution’s many items pledging to return government to our laps only expresses the best of intentions, like we heard in the Pledge to America. All the “whereas” and “reaffirms” in the resolution aren’t really necessary. There is a different problem we aren’t solving.

The real question is whether the power of the people is diminished less by going around our legislature, or by our lawmakers refusing to make decisions to fix long-standing problems. The president chose to make his own principles sound like ours in a rhetorical sleight of hand after the 2013 shutdown crisis ended:

… all of us need to stop focusing on the lobbyists and the bloggers and the talking heads on radio and the professional activists who profit from conflict, and focus on what the majority of Americans sent us here to do, and that’s grow this economy; create good jobs; strengthen the middle class; educate our kids; lay the foundation for broad-based prosperity and get our fiscal house in order for the long haul. That’s why we’re here. That should be our focus.7

For better or worse, that focus wasn’t maintained. Instead, things have gotten worse.

Where the power of the people went horribly wrong

Conservatives are so eager to pounce on everything Barack Obama says that they miss the occasional kernels of wit and wisdom. His address in Springfield to the Illinois General Assembly last week contained insight conservatives shouldn’t ignore and Democrats should pay attention to, like this simple concept:

Our Founders trusted us with the keys to this system of self-government.8

Our government lost those keys.

He’s changed. When Obama was a Senator, he supported Illinois coal. …But on his march to his presidency a few short years ago, he changed his philosophy.9

That sort of thing happens when you are elected president. The best of intentions swirl down the pipes as political reality sinks in and campaign promises vanish. It’s easy for all that power of the people talk you engaged in on the campaign trail to swirl away, too. It’s best to never have to repeat what Obama said in Springfield:

And in that same way, I want this democracy to live up to the people’s expectations. 10

I wonder if it hurts him to know he helped make sure it will never happen.