Humanity should not have been shocked by the attacks in Paris. There was nothing outrageous about what happened, even though the one-time leader of the free world chose to cast it that way.1 When America’s leadership decided long ago to publicly deny the direction Islam was so obviously taking, what did that portend for the civilized world?

We just saw a terrible example. 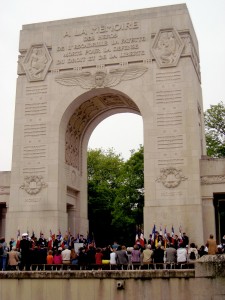 Lafayette Escadrille Memorial
Will we join forces to oust Islam?

Vowing that we would do “everything in our power” in the aftermath of Friday’s Islamic slaughter, John Kerry spoke of an attack on our “common humanity.”2 Believing in that common humanity has been one of our mistakes all along, a bigger blunder than placing our bets on the Arab Spring. There is no such thing. Even if there was, we can’t even control the violence against humanity in our own country, much less across a globe where humanity is a Western concept that doesn’t always work in practice.

In the parts of the world where Islam rules, its values are an affront to humanity. An astounding 82% of Muslims in Egypt and Pakistan endorsed stoning according to Pew Research Center data. Lashings and amputations were also on the list of approved punishments.3 The continuing atrocities committed by ISIS have taken religious law to an entirely new level, merging fundamentalism with terrorism more savagely than we have ever seen, but not to an excess we shouldn’t have anticipated.

Unable to label the adulterous behavior Islam disapproves of as criminal because France is not a Muslim country, ISIS vented its rage and disapproval with the same violent behavior we have seen in the Middle East. This doesn’t make ISIS special. Adultery is still a crime on the books in parts of the Islamic world. Homosexuality? Same thing. Our vice president pointed out that being gay is a capital crime in seven countries.4 Despite his vehemently pro-LGBT stance, Obama cut a nuclear deal with one of those countries, something his party’s supporters here at home might keep in mind.

In the face of a massive betrayal of the American people that places trust in Iran, the aftermath of our pullout from Iraq and Afghanistan, and disastrous Mideast foreign policy that handed the upper hand in the Syrian conflict to Russia, America and the rest of the civilized world is getting exactly what we should expect from this religion. America has yet to insist that Islam account for what is happening.

Real outrage against humanity will be inaction

How much shock will the world feign over terror that we knew was not going to remain in the Middle East, especially as we puzzle over what downed a Russian jetliner just two weeks ago?

Instead of combating extremism, Islamic pressure groups in the U.S. are focused on battling Islamophobia and using our values to benefit a religion that has proved woefully unable to suppress the radical elements it claims to disagree with. Sadly for its more benevolent elements, Islam could eventually be the first religion Western nations will be forced to regulate or even outlaw within their borders.

How many warning flags do the radical elements of this religion have to give the civilized world before we take it seriously? We got the news that ISIL is not Islamic after we dropped the ball on the terrorist group while it grew out of control. We endorsed a Middle East pro-democracy movement that, predictably, failed while chants of death to America persisted.

President Obama remarked about the “outrageous attempt to terrorize”6 in Paris, but there was nothing outrageous about what happened. September 11 was outrageous. Everything that came after was predictable. The events on Friday were just more of what has been happening in the Middle East all along, brought home to the West. What will be outrageous for humanity and the civilized world is the failure to put an end to Islam’s outrages once and for all.