Home » American Ideals and Values » My Country Wrong Even When It’s Right?

Mexico’s pledge of allegiance hit the House floor courtesy of the Victims’ Rights Caucus long before we started trashing the national anthem:

Velasco Elementary in Texas celebrated Mexican Independence Day by handing out small Mexican flags and making children as young as pre-kindergarten stand as parents recited the Mexican pledge in Spanish. That pledge honors the heroes of Mexico, promising always to be faithful and dedicate loyalty to that nation.1

We are a little more conflicted about what constitutes heroes in the U.S. and how we honor them. It used to be my country right or wrong. For many of us it’s now my country wrong, not right. Even the national anthem no longer merits national respect.

Celebrating other countries and respecting their symbols never changed. 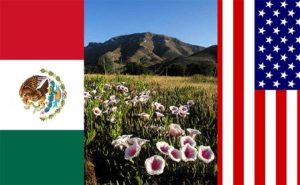 Do both deserve respect?
NPS/D. Bly

This year there was H.Res.372, “Recognizing the significance of National Caribbean American Heritage Month” with 11 cosponsors.3 S.Res.81 asked us to recognize the 196th anniversary of the independence of Greece and netted 26 cosponsors.4

Cinco de Mayo received a nod in May 2017 with S.Res.158, “A resolution recognizing the cultural and historical significance of the Cinco de Mayo holiday.”5 13 cosponsors including 3 Republicans signed on.

Every year September 15 kicks off Hispanic Heritage month. Before he became head of the Congressional Democratic Caucus, Rep. Joe Crowley reminded us that the observance serves:

When our country’s turn came up H.Res.532, “Expressing the sense of the House of Representatives regarding conduct during a rendition of the National Anthem” only had 12 cosponsors. All were Republican.7

My country right? It will never be right enough.

These [NFL] protests are about speaking out about unacceptable behavior and rhetoric, and fighting for justice.

I thank our players and Seahawks for addressing these issues with unity, compassion and truth. And I thank Colin Kaepernick for starting this important conversation. 8

The congresswoman spoke of oppression, police shootings, and the school-to-prison pipeline.9 We got the message. “My country wrong, not right” is where the contemporary left stakes its claim.

Not everyone agrees that our national symbols of independence deserve the same kind of treatment we lavish on those of other countries. It’s too easy to confuse heavily politicized issues with the big picture of what we are and where we came from, just like it’s easy to turn our freedoms into an endorsement of contempt many would damn if it was directed at another country.

President Donald Trump’s demands that the NFL team owners fire athletes who kneel or otherwise protest during the playing of the national anthem at football games is blatantly inconsistent with our Nation’s most fundamental constitutional and democratic values.10

The chair of the Congressional Black Caucus professed his “utter disgust”11 with Trump over his alleged disrespect for African American patriotism:

I write today to express my utter disgust with your handling of race relations in America in general and, more specifically, your disgraceful response to nationwide demonstrations against police brutality and racial injustice by professional football players, owners, coaches, and countless other patriots.12

The incredible irony is that Democrats will do anything to make sure Mexican and Latin American nationals keep coming to the U.S. illegally in search of a better life in a country they tell our citizens is morally unfit. If we believe what they say from the other side of their mouths, why would anyone risk coming here?

Correction: this post originally included a quotation from Donald Trump in an article appearing on the Congressional Black Caucus website and mentioned “Rep. Mike Lillis” as head of the Congressional Black Caucus. The head of the CBC is Cedric L. Richmond (D-LA). We regret the error. The quotation was replaced with footnotes 11 and 12, which have greater relevance for the discussion.