There is fake news and then there is fake politics. Anyone who trusts the news puts their beliefs at risk. News is entertainment. We should regard it with suspicion no matter where it comes from.

Fake politics is more insidious and damaging. The more cynical among us have learned never to trust a politician no matter how much we want to believe what they say. Others are so invested in the outcome of an election or legislative battle that they eagerly lap up every word from Capitol Hill celebrities.

The resolution documents remarks from administration officials that are allegedly untrue and insists:

the United States should continue being a democracy, not an autocracy.2

This threat to our political way of life was on the list:

Whereas on January 21, 2017, White House press secretary Sean Spicer stated, “This was the first time in our nation’s history that floor coverings have been used to protect the grass on the Mall. That had the effect of highlighting any areas where people were not standing, while in years past the grass eliminated this visual.”;3

That was in March. A lot has happened since then. 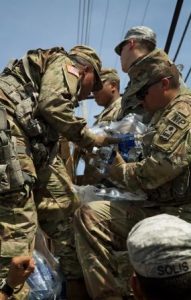 On September 25, 2017 Rep. Espaillat claimed that the president:

could not bother to lend a miniscule [sic] amount of support for Puerto Rico, the Dominican Republic, the island of Dominica, the Virgin Islands, or any other nation affected by Hurricane Maria…”4

The day before, FEMA reported that in addition to Department of Defense efforts:

The National Guard Bureau (NGB) has more than 2,300 Guard members on the ground in Puerto Rico and the U.S. Virgin Islands taking part in security and support operations.5

That was only a small part of the relief effort:

FEMA, working in coordination with federal partners, provided more than 1.5-million meals, 1.1-million liters of water, nearly 300 infant and toddler kits, and nearly 12,000 emergency roofing kits to the U.S. Virgin Islands and Puerto Rico for distribution to the public since Hurricane Maria’s landfall.6

FEMA’s timeline of relief efforts is detailed on the agency website and goes back to September 17, one week before the “miniscule” efforts were criticized and other Democrats joined in the fun.

Fake politics defined by one issue

If you want to know what fake politics is all about, it gets a lot better than belittling disaster relief. The biggest fake political story in the nation has been going on for many years and is only getting more outrageously false as time goes by.

While publicizing a “Moment of Truth” forum, the sponsor of the fake news resolution joined fellow Democrats and released a statement threatening that the president “has declared all-out war on immigrant youth,”7 a follow-up to remarks earlier in the year that warned of federal raids targeting families.8

a Hispanic American community who finds itself targeted by fearmongering and alternative facts.9

Who is spreading fear and alternative facts? It’s not the GOP. Common sense tells us that mass removal is a lose-lose for Republicans who are trying to find a solution to the DACA dilemma.

The fake politics of mass deportation

Back in July immigrants were warned by Rep. Luis Gutierrez (D-IL) about Trump’s plans for mass deportation:

I think we have to prepare for the worst and get ready to fight mass deportation. We showed up at airports to fight the Muslim and Refugee Ban and now DREAMers and people who have lived here legally for decades with TPS are in imminent danger.10

So far none of this has happened, but Democrats got the word out with fearmongering and fake politics. That’s a dangerous thing because some people, especially the neediest and most vulnerable in our society, actually trust politicians to do right and tell the whole truth.

Others of us know who most politicians do right by and it’s often not the people they claim to represent. That’s why fake politics is so important. People have to believe in those they depend on when they have no one else to turn to.

Here’s a big surprise for everybody. The Cook County soda pop tax was not about kids, after all. It was about making money. Of course you already knew that if you keep your eye on Illinois politics, but in a great article about the tax by Chris Lentino at the Illinois Policy Institute12 we find out that Board President Toni Preckwinkle had revenue in mind all along.

If you want to know how fake politics works it’s hard to beat the county’s soda tax. We were besieged by ads from Michael Bloomberg about the tragedy of unhealthy, obese kids swilling sugary beverages. While this may have had some marginal merit, county residents are already taxed on everything we can get our hands on. Even though a regressive sin tax sold on the backs of overweight kids surely made sense to revenue hungry policymakers, Illinois taxpayers aren’t complete idiots. County officials aren’t completely stupid, either. Angry voters give them weak knees.

Here’s a bright idea: next time shelve the fake politics and sell a bad tax as a tax. We’re used to getting screwed, but no one likes to be lied to.

8. Espaillat, Adriano and Matos, Kica. “Resisting Trump and Standing Up for Immigrants.” The Hill. May 1, 2017. http://thehill.com/blogs/congress-blog/politics/331166-resisting-trump-and-standing-up-for-immigrants, retrieved October 6, 2017.

10. “Gutierrez Warns Those With DACA or TPS to Prepare for the Worst.” Luis V. Gutierrez. July 12, 2017. https://gutierrez.house.gov/media-center/press-releases/guti-rrez-warns-those-daca-or-tps-prepare-worst, retrieved October 6, 2017.